All Eyes on Bedingham And Fletcher Ahead of the Final County Round of Fixtures! 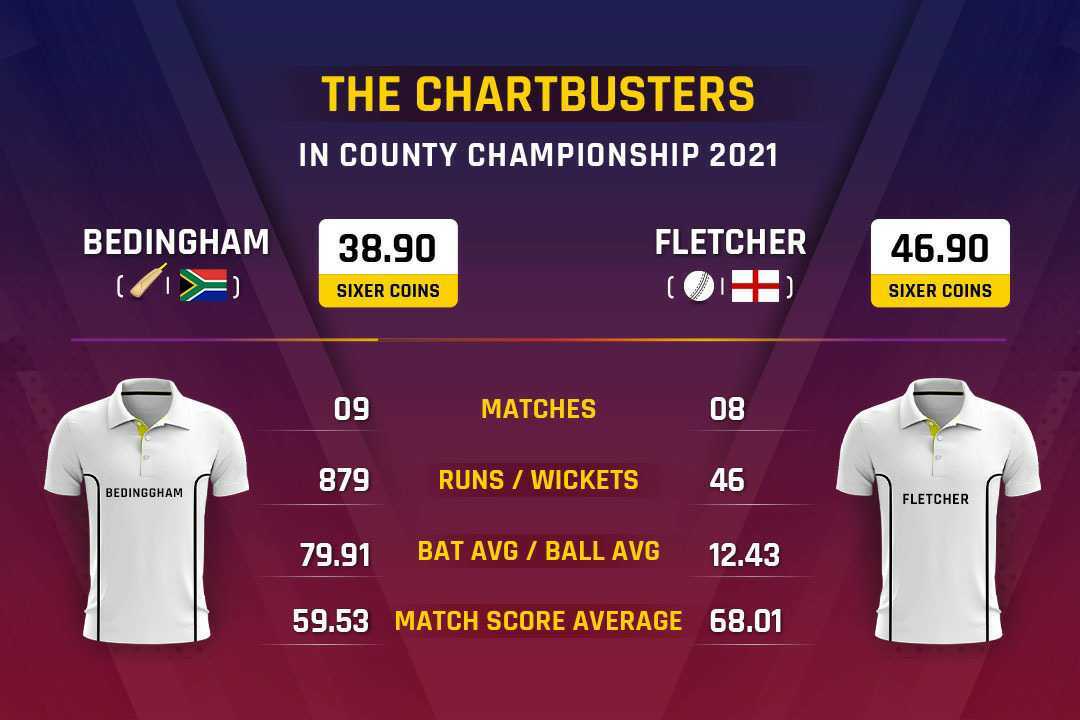 What a season we have had in the English Test County Championship. Amid all the IPL ruckus and the T20 Blast frenzy, the County Championship has provided stability to quite a few fantasy shareholders, who have made full use of the opportunities on the Market.

However, we approach the final round of the County Championship 2021, with Nottinghamshire and Durham's game at the Riverside Ground being the one to watch out for in this round. With both teams vying for the top spot, a riveting contest beckons.

However, there's a mini-battle to look forward to in this contest. Durham's David Bedingham and Nottinghamshire's Like Fletcher are undoubtedly the best of the lot this season. While Bedingham continues to top the run-scoring charts, Fletcher has found a new lease in life with a chart-topping campaign so far.

As we build-up to this game and the round itself, further insight into Bedingham and Fletcher's prospects are in order. Without further ado, here's your daily dose of Sixer Insight to get you going in the Market!

David Bedingham, who is in the midst of his first entire season with Durham, has exceeded expectations. South African-born Bedingham is a dashing middle-order batsman who is equally comfortable against spin and pace.

Although he didn't really light up the South African domestic leagues, Durham took a punt on the wicket-keeper batsman, a move that has already delivered rich dividends. Bedingham currently tops the run-scoring charts with 879 runs at an average of 79.91

He started this campaign with a couple of big scores, although a string of low scores in May caused his match score average to dip below 60. However, he still boasts of a match score of 59.93, which if replicated in the final round can hand his fantasy shareholders another big boost.

Bedingham's recent form is decent as well. He comes into this round on the back of a well-made 92 against Warwickshire with his attacking prowess taking centre stage. However, he will have to contend with a strong Notts bowling attack, something that may define his season and international prospects as well!

Notts' Fletcher Averaging A Match Score of 68.01 in County Championship 2021!

Speaking of the Nottinghamshire side, they currently top the group with 137 points. Key to their fortunes has been their bowling attack and Luke Fletcher in particular, who is the top wicket-taker in the competition as we speak.

In eight games, Fletcher has picked 46 wickets at a brilliant average of just 12.43. Wielding the new ball, Fletcher has often delivered with quick wickets early on, handing Nottinghamshire the early advantage. In addition, Fletcher has usually come up with handy runs down the order, a vital asset for the Notts.

In the absence of Jake Ball and Ben Duckett, a lot will ride on Luke Fletcher's all-round abilities with his battle against Bedingham being one to watch out for. Both of them are in decent form and are reasonably priced in the Market as well.

The last time Bedingham faced the Notts was in the first round where he scored 57 and 180*. Luke Fletcher picked four wickets in the game, although he couldn't really hit his strides in the opening round. Now that Fletcher has momentum on his side, his battle with Bedingham is sure to be an eye-catching affair. Who are you going to back in his battle and the County Round?