All Eyes on Pollard and Pooran As CPL 2021 Kickstarts the T20 Season! 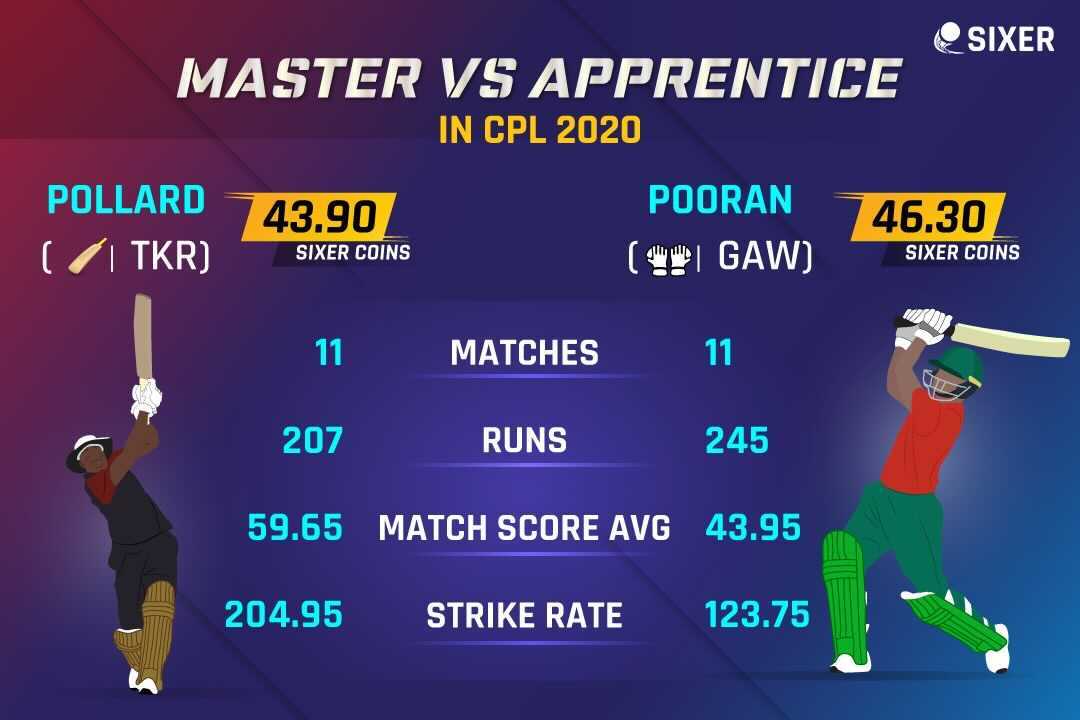 The T20 season is all set to kickstart with the Caribbean Premier League 2021 as defending champions Trinbago Knight Riders take on Guyana Amazon Warriors at Warner Park in St Kitts.

The Trinbago Knight Riders were unbeaten in their rampant 2020 campaign which ended in Kieron Pollard lifting the trophy. However, the teams are well-balanced with the likes of Dwayne Bravo and Fawad Ahmed shifting bases away from Trinidad.

Having said that, TKR is still the odds-on favourites to come out on top with a power-packed batting unit comprising of Lendl Simmons, Darren Bravo and West Indian captain Kieron Pollard. Not to mention, they have a solid bowling attack led by star spinner Sunil Narine, who will want to reiterate his standing as one of the best in the business.

They begin their campaign against a strong Guyana Amazon Warriors side led by newly appointed captain Nicholas Pooran. Having served as Kieron Pollard's deputy and as interim captain in his absence for the national side, Pooran would want to get the better of his mentor and get his side off to a winning start.

While a plethora of stars such as Shimron Hetmyer, Tim Seifert and Romario Shepherd are set to take to the field, all eyes will be on the West Indian duo of Kieron Pollard and Nicholas Pooran. To understand why they are two of the best powerhitters in the game, an insight into their 2020 CPL performances is required. Without further delay, here's your dose of Sixer Insight for the day!

Wily Pollard Turned on the Heat for TKR in CPL 2020! Can he repeat the trick?

Kieron Pollard has seen a bit of a renaissance in his T20 career since taking over national captaincy in 2019. Pollard was seen as a liability by many due to his dip in form in 2017-18. However, the burly all-rounder has answered his critics in style.

Pollard smashed 207 runs at a strike-rate of over 200 in the previous edition, leading his side to a CPL trophy. He was brilliant with the ball as he made good use of the sluggish conditions on offer. He was among a select few to average a match score of over 50 (59.65), reiterating his standing as one of the best in the business.

Diamond in the Rough - Nicholas Pooran sparkles in CPL 2020!

Speaking of Nicholas Pooran, the southpaw has grown in leaps and bounds over the last few years. Pooran is one of the cleanest hitters of the cricket ball who is capable of scoring runs at a brisk pace.

This was one of the highlights of his campaign in last year's CPL with 245 runs in 11 games. Although his strike-rate of 123.75 might not seem much, the nature of the pitch played a big role in this figure and the tournament itself. He could only manage a match score average of 43.95 although this was the highest among all Guyana Amazon Warriors batsmen.

Although his form hasn't been great in 2021, Pooran has improved over the last few weeks with his price now hovering in the mid 40s. With leadership also perhaps coming up as a blessing in disguise, Pooran will likely employ a cautious approach, at least in the beginning of his innings. Either way, Pooran will be key for the Guyana Amazon Warriors as they eye their first CPL trophy!

All in all, both Kieron Pollard and Nicholas Pooran will be key for their respective sides. With their ability to shift gears at will and also get their sides closer to a win, both of them are undoubtedly ones to watch our for in this tournament! With the IPL and the ICC T20 World Cup 2021 also on the horizon, both of them are surely ones to watch out for in the Sixer Market!