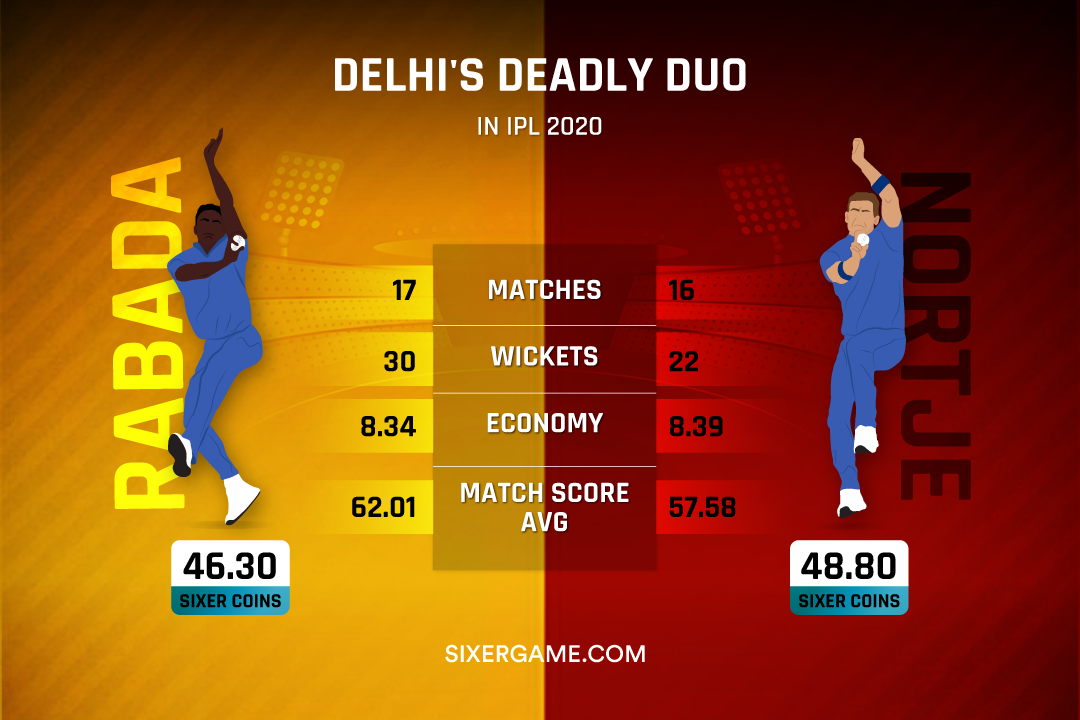 The Delhi Capitals are back in action today as they take on Sunrisers Hyderabad at the Dubai International Stadium. They return to the UAE, having had a brilliant IPL 2020 campaign, although they did end up losing the final to the Mumbai Indians.

They were one of the teams to beat in the previous edition in the UAE and this has been the case this season as well. Although they had to make do without the services of Shreyas Iyer, Delhi Capitals coped well to win six out of their first eight games so far.

While Delhi Capitals have the luxury of benching Steve Smith and Ajinkya Rahane on the batting front, their true strength lies in their bowling attack. Even though the Capitals boasts of a decent spin attack, the duo of Kagiso Rabada and Anrich Nortje is the one to watch out for in this potent Delhi attack. Why so? Here's some much-needed insight to kickstart your day in the Sixer Market!

Nortje and Rabada Accounted for 52 Wickets in IPL 2020!

Kagiso Rabada and Anrich Nortje were the talk of the town the last time the IPL was held in the UAE, and rightly so. They were crucial to Delhi's run to the Final, although they couldn't get Delhi over the line.

Kagiso Rabada, who has been sensational for Delhi in the last few seasons, was at his best in the UAE. He ended the season with 30 wickets, a match score average of 62.01 and the Purple Cap to his credit.

On the other hand, Anrich Nortje, who came in as a replacement for Chris Woakes, had a brilliant debut campaign with the Capitals. His express pace and innate ability to nail the yorker served Delhi well as he finished with 22 wickets and a match score average of 57.58 to his name.

Only Bumrah and Boult picked more wickets as a duo than Nortje and Rabada. While Nortje bowled a couple in the powerplay overs, Rabada sustained the pressure with his aggressive bowling ability in the middle overs. The death overs were where both of them nailed their skills to perfection and killed quite a few games for Delhi!

Although their recent form isn't too great with price decreases of over 5% in the last four games, Rabada and Nortje did what they could on tough Sri Lankan pitches which were more conducive to spin. Needless to say, they should enjoy the conditions in Dubai, a venue where both Rabada and Nortje has already enjoyed some success.

If not for Rabada or Nortje, who are priced at 46.30 Sixer Coins and 48.80 Sixer Coins respectively, there are a number of options available for this game. You could opt for a batter (David Warner, Shikhar Dhawan, Kane Williamson) or perhaps spin the Market into your favour with Rashid Khan! Who are you backing in the Market?