Amid Personnel Concerns for the Strikers, Can Rashid Turn the Tide in their Favour? 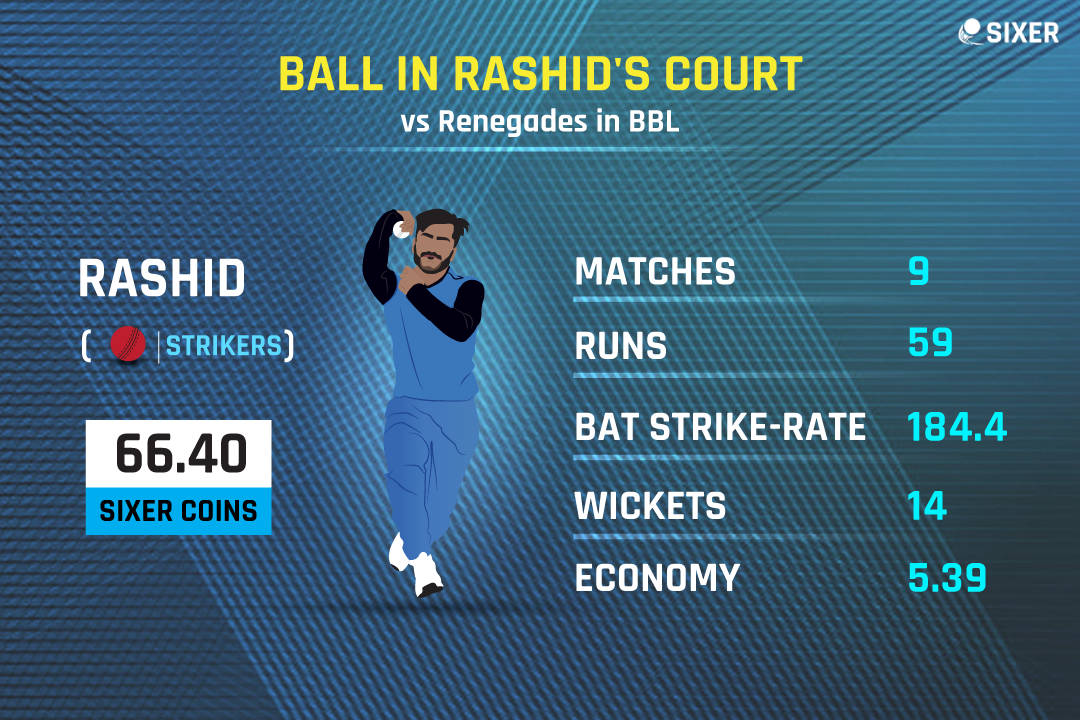 The Melbourne Renegades' young brigade was upto the task in their first BBL encounter, beating the Adelaide Strikers in a thriller. Youngsters Mackenzie Harvey, Zahir Khan and Will Sutherland excelled at the Docklands despite the Strikers baring a more stronger look on paper.

However, the Strikers have a golden opportunity to avenge their loss as they host the Renegades at the Adelaide Oval on Thursday. But they will have to make do without Matt Renshaw and Aussie internationals Travis Head and Alex Carey.

This in turn shifts the spotlight onto Afghan leggie Rashid Khan, who is one of the premier bowlers in T20 cricket at the moment. His record speaks for itself and is one of the more consistent performers in the cricketing sphere. Incidentally, Rashid has a decent record against the Renegades, which should come into play while you pick your players in the Sixer Market! So without further ado, here's some much-needed insight on Rashid and how he could play a role in today's game!

The answer to the aforementioned is a bit complicated. Now, Rashid does have a brilliant record against the Renegades but not many teams can boast of a superior record while playing Rashid, can they? CSK fans can hold their chins up high though.

Now Rashid's performances against the Renegades does deserve a look. He has picked 14 wickets in 9 BBL games and has also always picked a wicket whenever he plays them. In fact, Rashid has never picked more than two wickets against them but covers this minor drawback with an economy of 5.39! So the previous game in which Rashid conceded 30 can be classified as an anomaly.

In addition to his bowling exploits, Rashid has done his bit with the bat against the Renegades too. He has scored 59 runs at a noteworthy strike-rate of 184.4, one of the main reasons why he is often promoted up the order by the Strikers. He has inflicted some damage upon the Renegades in the past but it isn't as straightforward as it may seem!

The Match-Up Battle - Can Rashid Overcome the Threat of Nabi?

Having stated Rashid's greatness against the Renegades, the Melbourne-based franchise bares a new look this season. They have James Seymour alongside Mohammad Nabi in the middle-order, both of whom are good players of spin. Although Rashid has played a lot with Nabi, the veteran batter always seems to dominate this match-up.

62 runs in 36 balls is a great feat for any batter against Rashid, which is why Nabi holds the edge going into this game. Although two wickets should provide some solace for the leggie, the fact is that he will be keen to get one over his Afghan teammate.

In addition to Nabi, Harper and Fraser-McGurk are also decent options against spin bowling. But with even the best in the business struggling against Rashid in the past, it will be a battle to keep an eye out for at the Adelaide Oval. Can Rashid lift the Strikers to a win? Only time will tell!