Are Kuldeep and Chahal in Last Chance Saloon Territory In SL? 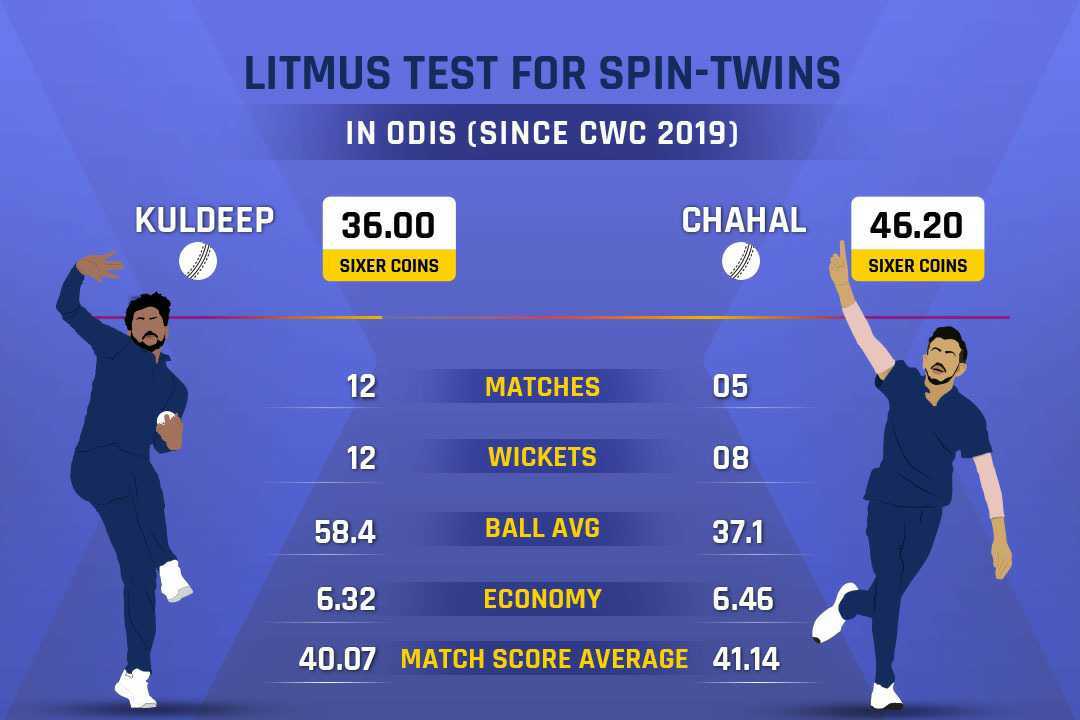 The 2019 ICC World Cup had a profound effect on Indian cricket. Who can forget the infamous semi-final loss that India suffered at the hands of New Zealand? However, there was a long-term effect which has rocked the Indian set-up till date.

Heading into the 2019 World Cup, India were touted by many as the favourites and for good measure. They had dominated in the lead-up to the tournament with their preferred spinners, Kuldeep Yadav and Yuzvendra Chahal starring in the middle overs.

However, Kuldeep and Chahal haven't had the best of times with teams finally getting the better of the spin-duo. They are now fighting for their places with the Sri Lanka tour coming as a blessing in disguise.

Despite Varun Chakravarty and Rahul Chahar in the reckoning, Chahal and Kuldeep are likely to be given the preference. However, can they make it count is a different question altogether. Before answering it, a look into their performances since the 2019 WC is in order. Without further ado, here's your daily dose of Sixer Insight!

Testing Times for Kuldeep and Chahal - Match Score Average of Less Than 50 in ODI since WC 2019!

Yuzvendra Chahal, Virat Kohli first-choice spinner for RCB and India, was a revelation in his early years. Capable of deceiving batsmen with clever variations, Chahal earned his place in the Indian side after the 2017 ICC Champions Trophy.

While he performed decently in the 2019 World Cup, Chahal's productivity has fallen. He has only played in five games, picking eight wickets at an average of 37.1. However, he conceded nearly 6.5 runs per over while accruing a match score average of 41.14 in this time frame.

On the other hand, Kuldeep Yadav has played a touch more frequently in this time frame. He has picked twelve wickets in twelve games at an average of 58.4. While his economy of 6.32 is less than Chahal's, his match score average reads a disappointing 40.07.

One of the major reasons for their success was their confidence in tandem. They fed off each other, something that Kohli relied on upon in the middle overs. However, a loss of confidence for Kuldeep, courtesy of a woeful 2019 IPL season started the downfall.

In addition, the emergence of Ravindra Jadeja the Allrounder also forced Team India to drop one of the two spinners. This brought about a phase of inconsistency in both their games with opposition batsmen also taking more chances against them whenever they play.

However, they wouldn't have to worry about Ravindra Jadeja as they enter the Sri Lanka series as the more experienced spinners in the Indian roster. They are likely to get the nod ahead of Chahar and Varun, although both of them should get some game time regardless of whether they are the first choice.

Both of them have a decent record against Sri Lanka and will be banking on themselves to come good once again. But can they stamp their authority on this tour? If you think they can, the Sixer Market is the place to be!