BBL Preview Part 1: Can the Sixers Complete A Three-Peat Amid Stern Competition? 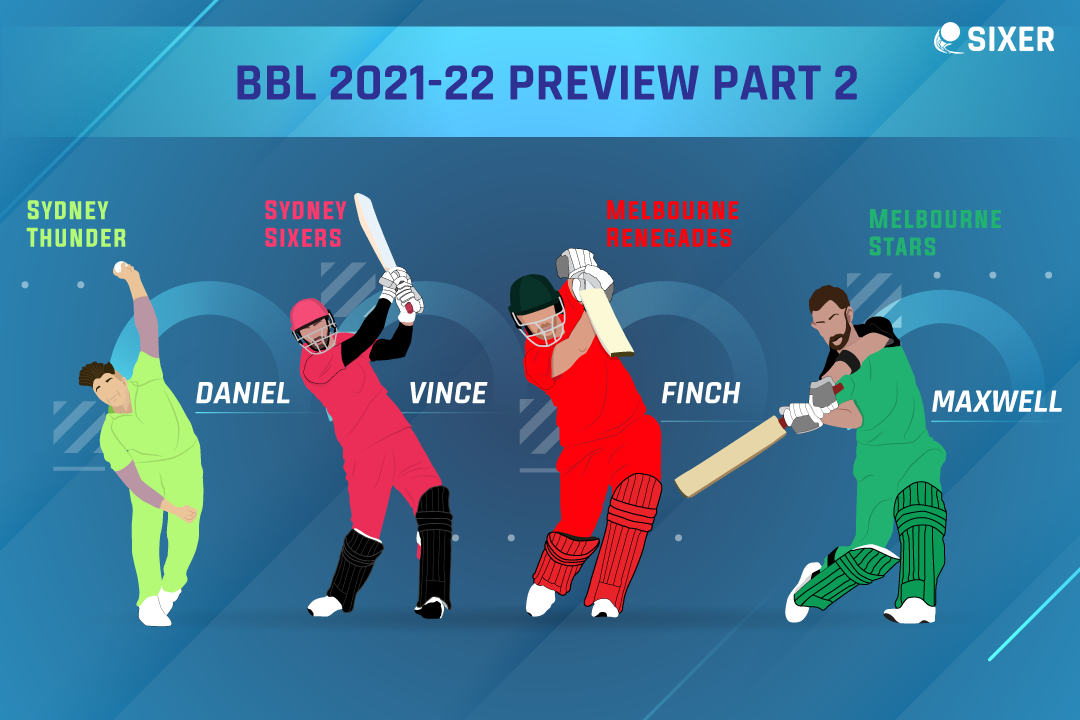 BBL 2021-22 is all set to kick-off at the SCG as defending champions Sydney Sixers take on Melbourne Stars. There's a lot in store for the Sixer fantasy shareholders in terms of opportunities and entertainment in the Sixer Market. But for those who may not be at terms with the BBL and the build-up towards the tournament, a preview is the need of the hour. So without further ado, here is some Sixer Insight on four of the strongest teams in the BBL - Sydney Thunder, Sydney Sixers, Melbourne Renegades and Melbourne Stars. Here. We. Go!

The Sixers walk into this tournament as one of the strongest teams given a good mix of youth and experience they possess. They are the reigning champions for a reason with their overseas imports also likely to feature heavily this season. Their batting unit might be the most resourceful one with Josh Philippe being one to watch out for in their side. However, their bowling attack will hold all the aces if they are to make a deep run in the BBL yet again. With a couple of talented youngsters in the reserves as well, the Sixers are in prime position to go the distance.

In a side that features household names in Daniel Christian, Josh Philippe and Sean Abbott, Daniel Hughes' efforts have gone unnoticed to an extent in the last few years. The Sixers' vice-captain is a technically sound batter who can up the ante when needed to, which adds balance and solidity to the batting unit. Capable of batting at the top of the order as well, Hughes has the powerplay game to excel against the new-ball. Priced at 41.70 Sixer Coins per Share, Daniel Hughes' stocks are already one of the most popular fantasy stocks. Given his returns for the Sixers last season, he is surely one to watch out for in this BBL season.

The Melbourne Stars are perhaps the BBL version of the Royal Challengers Bangalore. They have blown hot and cold in the BBL over the years with the trio of Marcus Stoinis, Glenn Maxwell and Adam Zampa holding fort with their performances. But they tend to underperform in the backend of the tournament with inexperience haunting them in recent years. They have rung in a few changes ahead of this season with Joe Clarke and Qais Ahmad taking up the overseas spots. With a seemingly balanced side in store, Stars will fancy their chances of going all the way this time around.

Apart from Clarke and Qais, the Stars have also signed Beau Webster, who made move from the Marvel Stadium to the iconic MCG for the season. Webster, who had a stellar 2019-20 season, couldn't live up to expectations last time around. He has a lanky right-hand batter who can hold the middle-order with his consistent performances. Not to mention, he is a resourceful bowling option, who can bowl both medium-pace and off-spin, a skill that might be Melbourne Stars' go-to option alongside Adam Zampa's leg-spin. Expected to bat at number six for the Stars, a lot will depend on how Webster performs in his all-rounder role as Glenn Maxwell and co eye a maiden BBL trophy.

Former BBL champions Sydney Thunder is an intriguing prospect in the competition. Sure, they have Alex Hales and Daniel Sams, two of the best in the league. But the rest of the side reminds you of Moneyball, where each player has a specific role to execute. The beauty of the Thunder set-up is the faith they have in their players, which is perhaps one reason why Callum Ferguson was released ahead of the season. The onus will fall on uncapped players such as Matt Gilkes and Alex Ross while Chris Green leads the troops in Usman Khawaja's absence. In addition, they avail the services of Billings and Mahmood, two very accomplished T20 cricketers who offer skill-sets that are hard to find. But can they pack a punch in the playoffs, if they qualify? Only time will tell.

The Sydney Thunder released Callum Ferguson, who was in fact their captain last season. While this might have come as a surprise to many, the Thunder might have already had a backup in Oliver Davies. The explosive batter is one of the most highly rated youngsters in the Australian circuit, playing for the U-19 team as well in the past. He played a few games in the previous season, even scoring a fifty for the Thunder. He is adept at playing both pace and spin and should be given a longer run this time around.

The Renegades have underwhelmed since winning the tournament in 2018-19. Going into this tournament, they have seemingly put their faith in youngsters such as Mac Harvey and Jake Fraser-McGurk. In addition, they have brought in Nic Maddinson from the Stars, who will also captain the side this season.  A lot will depend on their star players Aaron Finch, Kane Richardson and Mohammad Nabi to deliver the goods if they are to go far in this tournament. With their young brigade doing well in the domestic competitions, a lot is expected of this youthful Renegades set-up.

Will Sutherland has been a curious case for the Renegades. He has been earmarked by the Renegades set-up as one to watch out for in the last few years but hasn't been able to replicate his domestic form into the BBL. But with decent experience under his belt, Sutherland could be in for a breakout season with the Renegades this time around. Sutherland is a handy death bowler who can also pack a punch with the bat, adding value to the Renegades set-up. But can he add more value to his fantasy stocks? That's a question that will need answering.