BBL Preview Part 2: Are the Hurricanes, Scorchers Dark Horses To Go All the Way in BBL 2021-22? 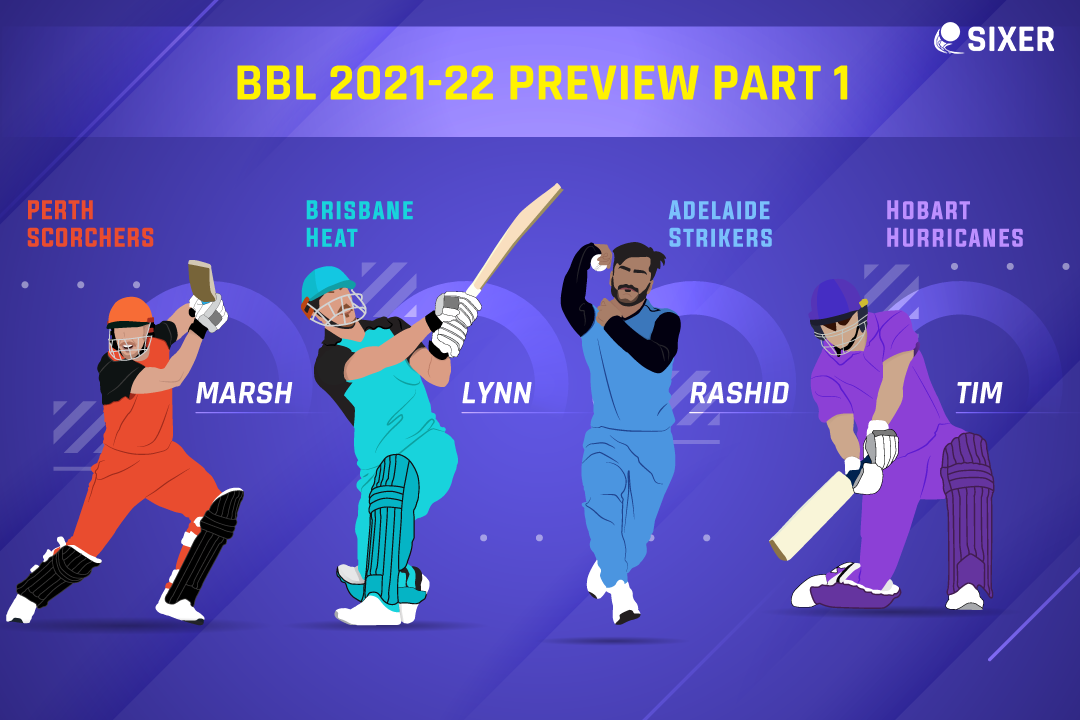 The BBL is up and running with the Sydney Sixers beginning their campaign with a brilliant win over the Melbourne Stars. However, we are just ONE game into the season. There's a lot to look forward to in terms of players and team set-ups, something we take up on our end to help you get a better understanding. As part of the BBL previews, here is some much-needed insight on the remaining BBL teams - Hobart Hurricanes, Perth Scorchers, Adelaide Strikers and Brisbane Heat. So without further ado, let's jump into the thick of things!

Brisbane Heat had a big run in the playoffs last season, riding on the fortunes of Marnus Labuschagne and Mark Steketee. However, both of them aren't expected to feature in all of their games, which may test their roster. Fortunately, they have made a few key changes to their roster, bringing in Ben Duckett and Tom Abell, both of whom impressed in the T20 Blast and the Hundred. In addition, their young brigade comprising of Xavier Bartlett and James Bazley has experience under their belts. With everything seemingly set in place, the Heat could be a darkhorse to go all the way.

Speaking of dark horses, Jimmy Peirson, the new Brisbane Heat captain, is one of the most underrated players in the BBL. The veteran keeper is not known for massive sixes but is capable of keeping the scoreboard ticking and upping the ante when required. He can be likened to Dinesh Karthik, who relies on picking the gaps rather than brute force. Expected to take up the floater's role for the Heat, Peirson at 40.10 Sixer Coins could well be a steal in the Sixer Market.

The Adelaide Strikers are in for a turbulent season with player availabilities being a concern. Alex Carey and Travis Head are set to feature for Australia in the Ashes, which may leave them a touch light on batting resources. However, the Strikers have a couple of talented players in Matt Short and young overseas signing George Garton to cover up for the Aussie duo. But their main strength lies within in their bowling attack with Rashid Khan set to be available for the entire BBL season. With Peter Siddle and Wes Agar also having decent BBL seasons last time around, the Strikers cannot be taken lightly.

Matt Short is in for a longer run in the Adelaide Strikers set-up with Alex Carey and Travis Head likely to be away for the league phase with the Australian Test side. The lanky Victorian has been a consistent performer across the other domestic competitions, even proving his worth with the ball. He is expected to take up a top-order role and could be the find of the season if the Strikers can back him with the same faith that his domestic side Victoria employs. Can Short finally breakout in the BBL? Only time will tell!

Perth Scorchers have been one of the most successful franchises in the BBL with multiple championships to their names. But like the Strikers, they are also riddle with personnel concerns. Josh Inglis and Jhye Richardson are set to feature in the Australian Test side with Cameron Green also not likely to be available. The onus falls on captain Ashton Turner, who is due for a big season for the Scorchers. They have a couple of world-class talents to fall back on in the likes of Colin Munro and Mitchell Marsh, meaning the Scorchers are still one of the teams to keep tabs on in the BBL this season.

Ashton Turner comes into this season with the captaincy arm-band and also a point to prove with the bat in hand. Once viewed as the next big thing in Australian cricket, Turner's misfortune with injuries and lack of a sustained run in any team he plays for has hindered his reputation. However, Turner still remains one of the cleanest strikers of the cricket ball in the Australian domestic circuit. With Inglis leaving a void in the middle-order, Turner could be deployed in a floater's role in the first half of the BBL, making him a good addition to your portfolio in the Sixer platform.

Last but not least in our preview series are the Hobart Hurricanes, who might be the consensus favourite to win it all. Their batting unit is arguably the best in the competition alongside that of the Sixers. In D'Arcy Short, Matt Wade and Ben McDermott, they have a proven trio which can win games singlehandedly. The emergence of Tim David bodes well for them while the additions of Harry Brook and Jordan Thompson only adds to their case as the hot favourites. With a bowling attack that boasts of Nathan Ellis, Riley Meredith and Sandeep Lamichhane, the sky is the limit for the Hurricanes!

Although he really isn't an unknown entity by any means, Ben McDermott's performances haven't stolen the limelight courtesy of the emergence of Tim David and Nathan Ellis and also the pyrotechnics of Short and Wade at the top of the order. McDermott is adept at playing both pace and spin and can hit a long ball as well. With some experience and good form coming into this tournament, McDermott could be in for a sensational season with the Hurricanes and you wouldn't want to miss out on him if he does!