Back With A Bang! Can Banton Make A Case for the England T20I Side? 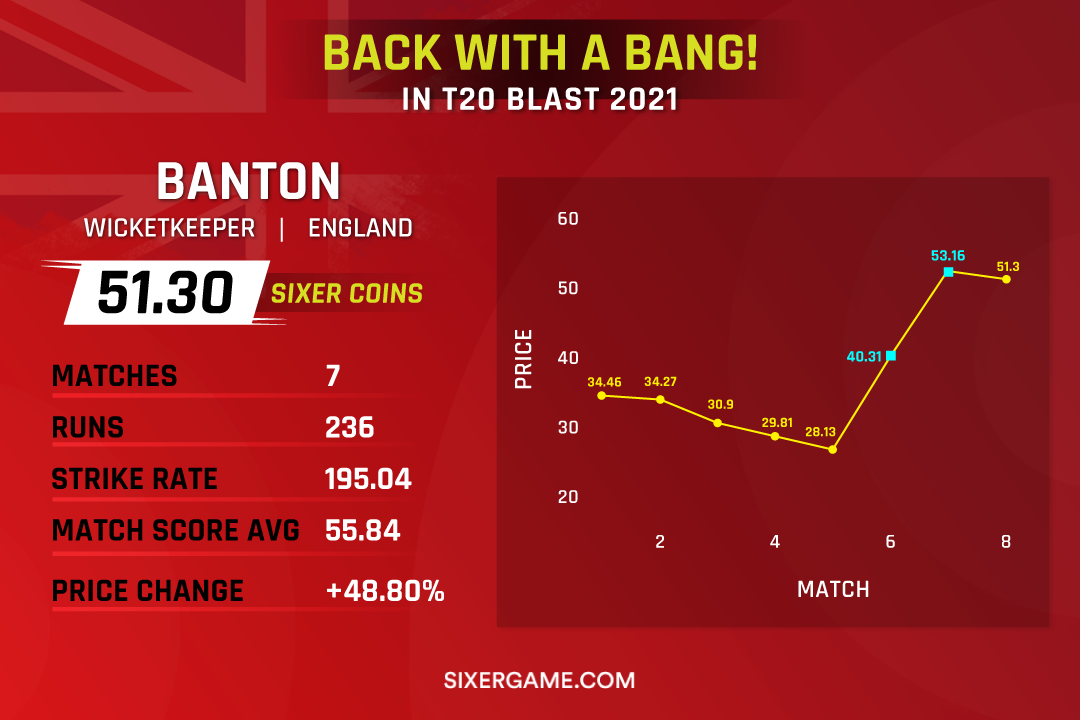 Not many can boast of what Tom Banton has achieved at the tender age of 22. Banton has already featured in various franchise leagues such as the IPL and PSL, along with international caps in both white-ball formats.

However, the last year or so hasn't been quite fruitful for the Somerset batsman. He struggled to get going in his only IPL season to date and was dropped from the English squad as well.

In addition, Tom Banton endured a tough County campaign which saw him being ousted from the playing 11 courtesy of the emergence of Ben Green and Will Smeed. This woeful form was clearly evident in his confidence as he struggled in the initial phases of the T20 Blast 2021 as well.

However, Banton has answered his critics and doubters emphatically with a couple of eye-catching performances for Somerset. This has led to his inclusion in the English set-up, completing a remarkable turnaround for the youngster.

But the job is only half done for Banton. A return to the national set-up isn't the end goal. A couple of years ago, Banton would have eyes a spot in the 2021 ICC World Cup squad, which might seem a step too far at the moment. But by the look of things, it isn't impossible. To understand Banton's recent surge in form, a deeper insight is in order!

Tom Banton's rise in English cricket is astonishing, but before we get into the thick of things, an insight into what a player he is in terms of style and performance.

Banton is a highly skilled wicket-keeper batsman who is equally adept against spin and pace. He relies on his timing and range and is likened by many to Kevin Pietersen. He is a brilliant puller, a characteristic that holds him in high regard in overseas conditions.

However, Banton had a poor County Championship campaign heading into this year's T20 Blast. Although he came up with a couple of eye-catching performances early on, Banton's price never went up past the 30 Sixer Coins mark.

In the last few weeks, Banton has upped his game with Somerset down in the race for a knockout spot. Alongside Devon Conway, whose inclusion has reinvigorated the side, Banton has regained some of the fearlessness he was so loved for early on in his career.

Although his match score might just read 55, Banton's impact is undeniable. As far as the England side is concerned, the backup wicketkeeper spot is up for grabs. While Sam Billings is the hot favourite, Banton's fearlessness and form make him a tailor-made replacement to both Bairstow and Buttler. Not to mention, he could well be the focal point of their batting unit going forward.

There's a lot of value in Banton being given the nod for the World Cup, but performances do matter. But if he continues his form, there's no telling how high Banton can soar in the world of cricket!