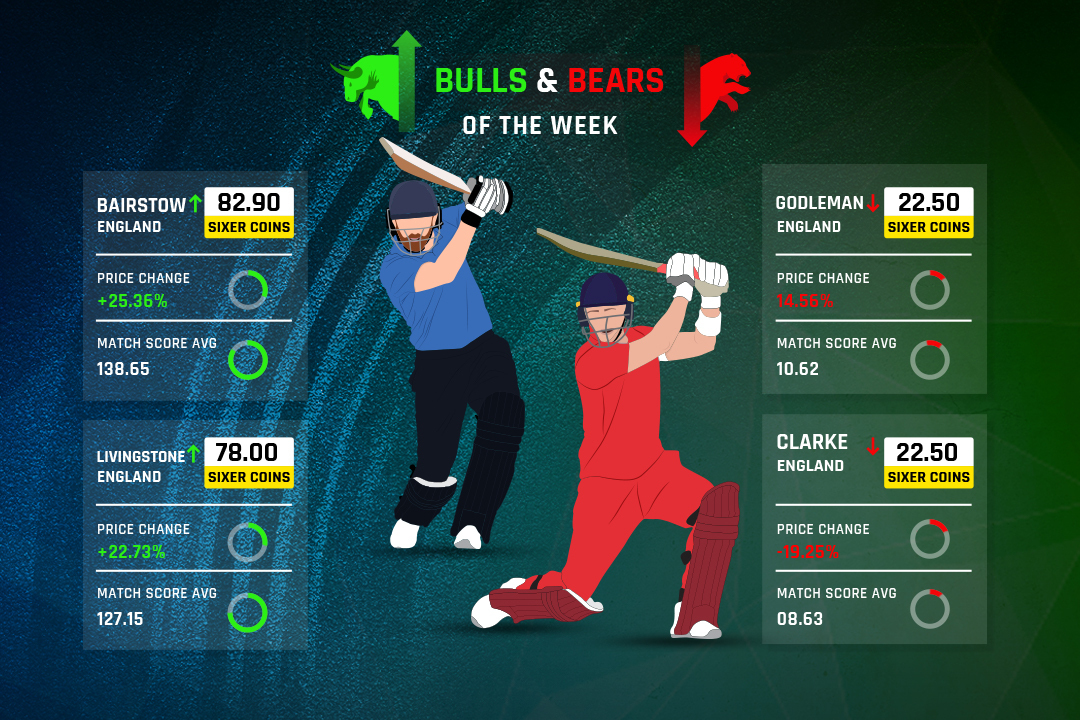 Another entertaining week of T20 Blast cricket passes by with Sixer fantasy shareholders making full use of the opportunities on offer. Not to mention, the WTC Final is also underway, with the likes of Ajinkya Rahane and Kyle Jamieson already making an impact.

However, only a few stand out with consistent performances in the Sixer Market, earning them the tag of a Bull. Well, to every yin, there is a yang, and likewise, there are Bears as well. So, walking along the same lines, here are the Bulls & Bears of the Week in the Sixer Market!

Jonny Bairstow is one of the feared openers in world cricket, and we saw exactly why he is regarded that in the past week or so. Opening the batting for Yorkshire, Bairstow was at his supreme best. In two games, Bairstow saw a whopping price increase of 25.36%! He scored as many as 194 runs in two games with a match score average of nearly 139 to show for his efforts.

Bairstow even scored a hundred in the process while battling a minor injury, something he will look to manage ahead of the Sri Lanka T20Is. While Bairstow has topped the Sixer Market with his price reading 82.90 Sixer Coins, there is still some room for an increment given his recent burst in form. If he were to sustain this form, we could see another massive increase in Bairstow's fantasy value on Sixer!

From one end of the Sixer Market to the other, we have Billy Godleman, who makes the cut as a Bear this week. Despite all the talent he possesses, Godleman has had a woeful T20 Blast campaign so far with Derbyshire.

In the last week, Godleman has managed just 11 runs, with his price dropping by 14.56%. He doesn't have luck on his side with the experienced batsman unable to get going in the powerplay phase. However, given his experience, it may just be a better of a few shots before he gets going. With his price reading a miserable-yet-attractive price of 22.50 Sixer Coins, Godleman presents an excellent long-term opportunity in the Market!

Although Liam Livingstone hasn't been at his free-flowing best, he has managed 110 runs in the past week with a couple of wickets to show for his efforts as well. As a result, Livingstone is now one of the highest valued players in the Sixer Market at 78.00 Sixer Coins per Share!

With a match score average of 128 and a price increase in excess of 20%, Livingstone makes the cut as a Bull this week. He was instrumental in the Lancashire batting unit, although he is now in line to play Sri Lanka later this month. If his Lancashire exploits are any indication of things to come, you better not miss out on Livingstone in the Sixer Market!

Not long ago, Joe Clarke slammed a whirlwind hundred whilst registering a 150 match score in the T20 Blast. However, he makes this list as a Bear, courtesy of a 19.25% decrease in fantasy stock price.

He couldn't muster a sizeable score with a sorry match score average of 8.63. As a result, his price is now down to 43.20 Sixer Coins per Share, which opens up an opportunity for a trade. He plays a few matches at Trent Bridge, where he should enjoy the conditions as an opening batsman. With Clarke facing his former team Worcestershire today in the T20 Blast, he could well be a great addition ahead of today's marquee clash!