Bulls & Bears of the Week: Brook up by 37% as Azam, Hazratullah Falter 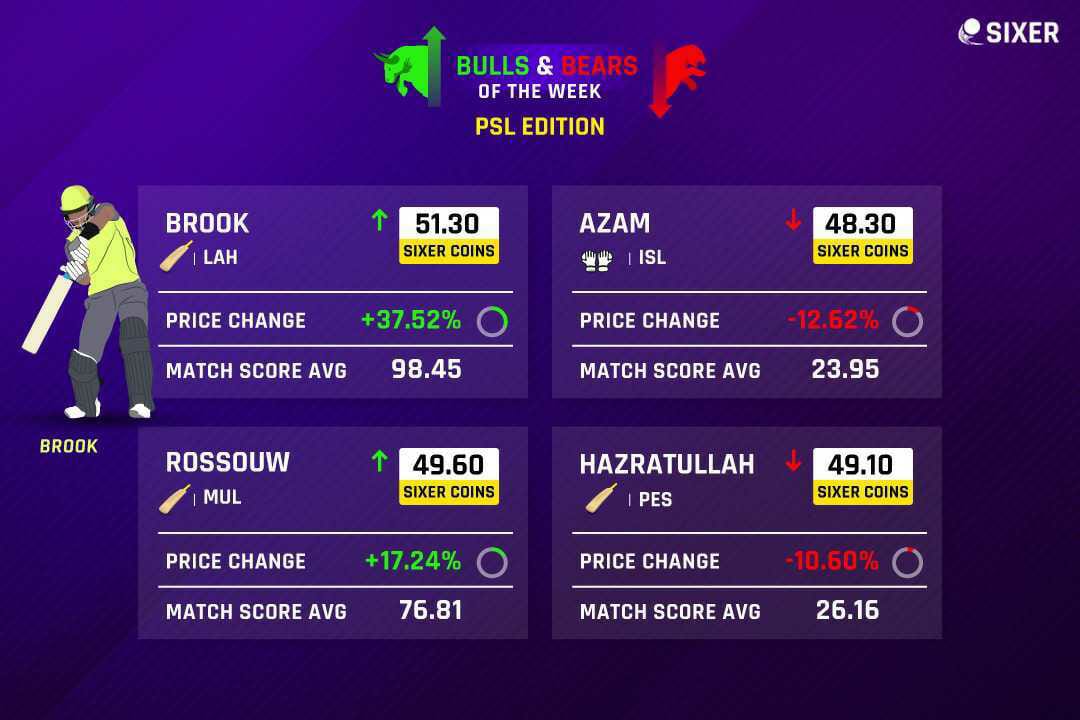 The PSL playoffs are here with Multan Sultans and Lahore Qalandars battling it out in the Qualifier today. However, the league phase did provide a lot of opportunities and entertainment over the last week or so. With an eye on the playoffs and possibly the Australian tour of Pakistan, here are the Bulls and Bears of the Week.

Harry Brook is the undoubted Bull of the Week and for good reason. While Brook has blown hot and cold in the PSL this season, he saved his best for Islamabad United. Brook scored a scintillating ton to resurrect a Lahore Qalandars win over the Islamabad United. As a result, his price went up by nearly 38% with a match score average of 98.45. Despite the whopping increase, Brook's fantasy shares are still worth less than 50 Sixer Coins per Share, which leaves a lot of room for another big increase. Will he be able to sustain his newfound form? That is a question that will need answering soon.

Another foreign player in this list is Hazratullah Zazai, who hasn't had the best of PSL seasons this time around. One of the standout players in 2021, Zazai has been overshadowed by Mohammad Haris at the top of the order. Zazai hasn't been able to get going in the powerplay phase with a match score average of just 26.16 to show for his efforts. Although his price has dropped by 10%, Zazai has the ability to win games single-handedly. With the knockout phase being a good enough stage for one, all eyes will be on Zazai when Islamabad faces off against Peshawar tomorrow.

Moving on, we have Rilee Rossouw, who is set for action today in the Qualifier. But Rossouw comes into this week on the back of a stunning performance against Quetta Gladiators, scoring one of the fastest fifties of the season. Rossouw registered a match score average of 76.81, resulting in a whopping 17.24% increase despite not turning out to bat in the subsequent fixture. Given the form that he is in at the moment and Maqsood's availability up in the air, Rossouw will be one of Multan's go-to players once again in the Qualifier and hopefully the final too.

Last but not least is Azam Khan, who will walk into the knockout phase as one of the Bears of the week. Although Azam had a good outing at number four a week ago, his form hasn't been great in his last two games. His fantasy price is down by 12.62% and his match score average reads 23.95. The Islamabad wicketkeeper will be keen to getting back into runscoring form and given his knack for taking on the spinners, Azam at 48.30 Sixer Coins isn't a bad option at all in the Sixer Market!