Bulls & Bears of the Week: Bumrah Bounces Back into the Gains As Short Drops by 17%! 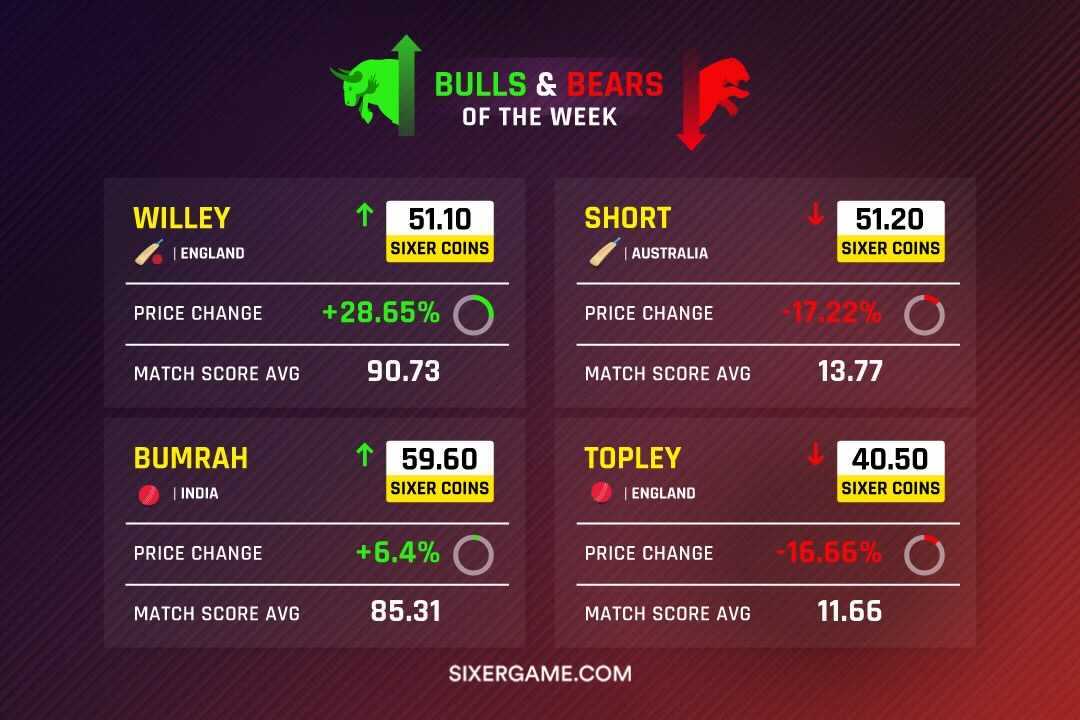 Jasprit Bumrah silenced his critics with an emphatic performance against England in the first Test to stand out as the Bull in this week's Sixer Market! Who else made the cut as the Bulls and the Bears this week? Lets find out!

What a week it was in the Sixer Market and, of course in the world of cricket! We had an action-packed week filled with the Hundred action and the India vs England Test series. However, only a few make the cut as the Bull and, unfortunately, a Bear in this week's edition! So without further ado, here are your Bulls and Bears of the Week!

Jasprit Bumrah's form ahead of the first Test was always a concern. Especially after a no-show in the WTC Final. However, Bumrah silenced his critics with an emphatic performance worth a match score of 85.31! He registered the highest match score for an Indian during the week, seeing his price increase by 6.1%!

Heading into the second Test, Bumrah's stocks are sure to be a popular selection in the Sixer Market for obvious reasons. He is one of the best bowlers in the world and has regained his form at the time of need. Adding in the bowler-friendly conditions at Lord's, surely Bumrah is worth the hype at 59.60 Sixer Coins per Share!

Reece Topley has seen a rise in opportunities since added a extra bit of pace in the last few years. However, Topley has had a lackluster week in the Hundred and consequently in the Sixer Market as well. Topley couldn't pick a wicket in either of the two games he played in, causing his price to drop by 16.66%.

His match score average read just 11.66 with his economy on the higher side as well. However, Topley has the skill-set and the advantage of being a tall left-armer that ideally plays into his hands. With the Oval Invincibles eyeing a place in the last four, Topley and his incisive swing bowling is definitely one to watch out for in the coming games.

The Nothern Superchargers didn't have the best of starts to their Hundred campaign. However, David Willey has been in integral to their change in fortunes in the last week or so. David Willey has turned up with both bat and ball since taking over from Ben Stokes with a match score average and price increase of 90.73 and 28.75% respectively.

He has been severe against the spinners and effective with the new ball, something that has served the Northern Superchargers well. With pitches helping his skill-set to a certain degree, he is sure to be a popular option in the Sixer Market!

Last but not least is unfortunately our second Bear of the week, D'Arcy Short. After a scintillating start to his Hundred stint, Short has seen in a 17.22% decrease in his fantasy price over the last week or so. Short has only managed a match score average of 13.77, which is well under-par compared his fellow openers in the Hundred.

However, Short provides a decent opportunity in the short run. The Aussie is quite capable of taking the attack to the opposition and is a force to reckon with the ball as well. With Trent Rockets likely to make the playoffs, Short is definitely one to keep tabs on going forward in the Sixer Market!