Bulls & Bears of the Week: Clarke Turns Bull With 60% Increase! 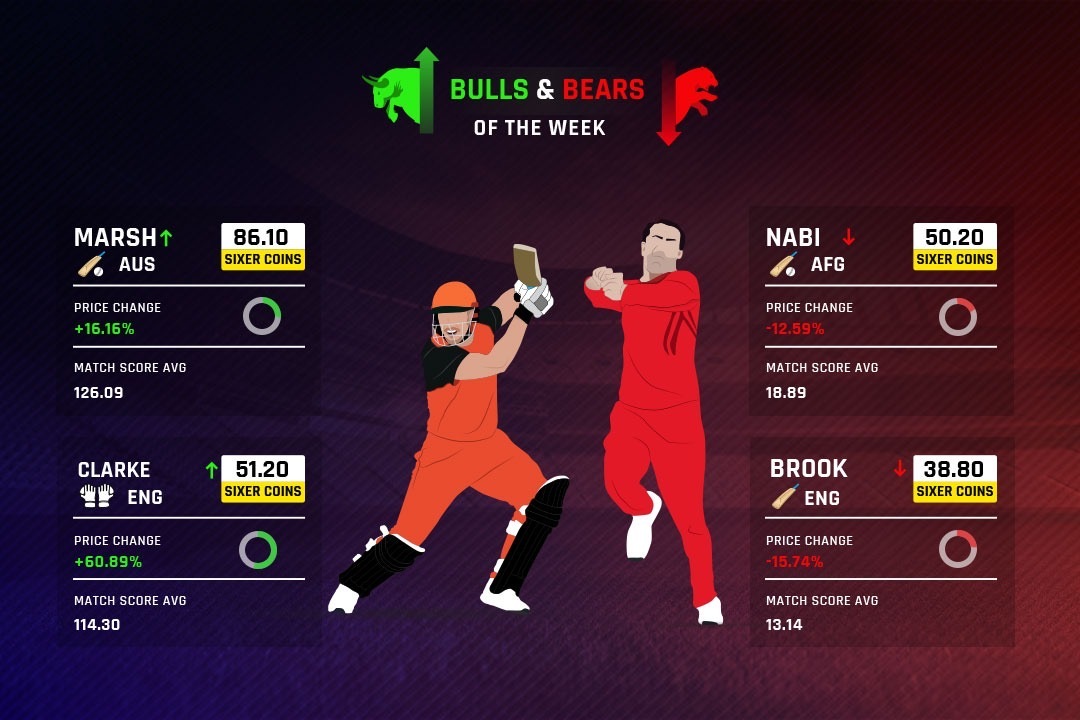 The penultimate week of the year saw some fantasy stocks soar in the Sixer Market. With two double-headers in the BBL over the weekend, the Sixer community relished the opportunity on offer. While a few players stood out with absurd numbers, there were a couple who couldn't really fire with the bat or ball in hand. So without further ado, here are your Bulls and Bears for the Week!

Mitchell Marsh makes the cut as a Bull for the second week in a row and for good reason. The star all-rounder has been in imperious form as he topped the Sixer Market with a fantasy price of 86.10 Sixer Coins. To give you more context on his dominance, the second-highest among Sixer fantasy stocks is that of Wanindu Hasaranga's, priced at 81.50 Sixer Coins!

Marsh turned in two man-of-the-match performances over the week with a match score average of 126.09 to show for his efforts. His exploits have spurred the Scorchers to an unbeaten start after six games already. However, they face a stern test in the form of the Sydney Thunder today. But with Marsh being in sublime form, he is surely one to keep tabs on in the Sixer Market!

Mohammad Nabi is one of the premier allrounders in T20 cricket, having played in every franchise leagues across the globe. However, his experience couldn't help him during the week as his fantasy shares dipped by nearly 13% in the Market.

The Renegades were unable to get the better of the Scorchers on both occasions with Nabi's lackluster finishing with the bat denting their chances of a second win of the season. As a result, he could only muster a match score average of 18.89, something he will be keen to rectify in the upcoming matches.

Mohammad Nabi would only need to look as far as cross-town rival Joe Clarke for inspiration! Having made the list as a Bear on not one but two occasions already during the BBL, Clarke silenced his critics and repaid the faith in him with two brilliant knocks.

While his fifty against the Hurricanes wasn't fluent, Clarke was able to get himself into run-scoring form. He saved the best for the Brisbane Heat as he smashed his way to a player-of-the-match award courtesy of a swashbuckling fifty. His match score average of 114.30 during the week was second to that of Marsh and Ben McDermott but his price change of +60.89% was the highest by a long way! With there being some room for an increase still, Clarke might be in for a big season with the Stars!

Harry Brook, who was recruited by the Hobart Hurricanes after stunning Hundred and T20 Blast campaigns, hasn't really lived upto the expectations so far. Brook has found it tough going Down Under with his fantasy price dropping down to 38.80 Sixer Coins per Share.

Brook's fantasy shares dropped by 15.74% in value courtesy of a match score average of 13.14 over the week. However, it must be said that Brook has had to bat lower down the order than usual, a position which may need some time to get used to. There is some concern over his position in the side but given his ability against both pace and spin, Brook is certainly a good prospect for both England and Hobart Hurricanes in the coming weeks!