Bulls & Bears of the Week: Gaikwad Stuns Mumbai as Billings, Lewis Falter in the Market! 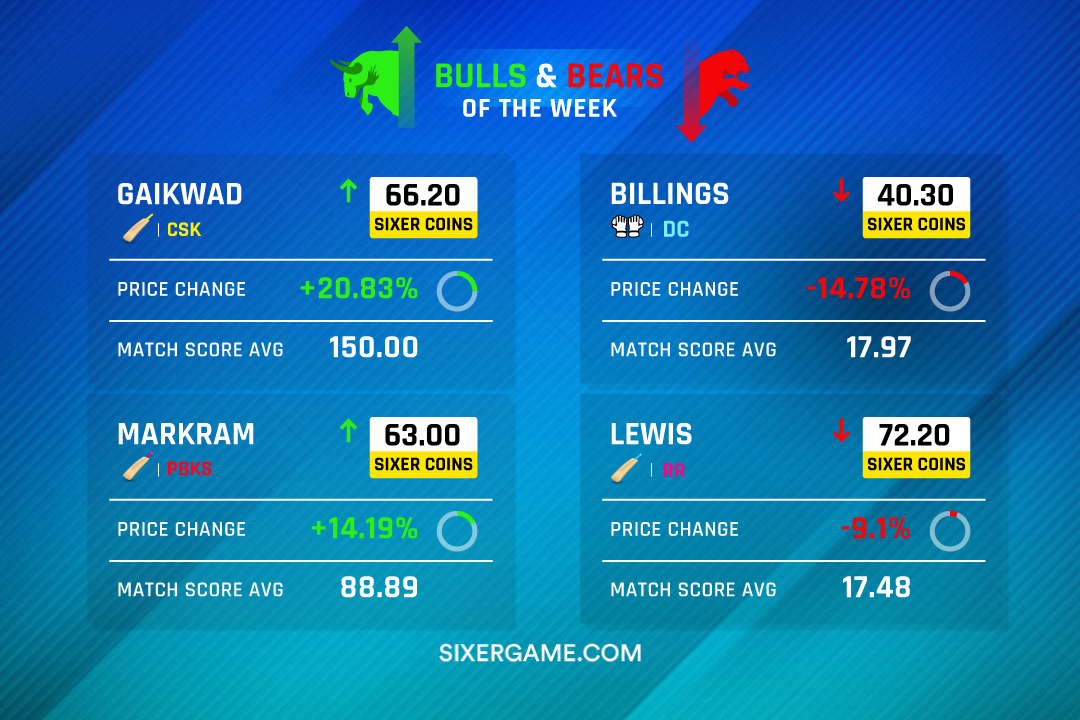 The IPL is underway, and we've already seen a couple of noteworthy performances fitting the occasion. However, it isn't just about the IPL. We had our fair share of cricket during the last week or so, and with the IPL just getting started, we are in for a treat in the Market. To understand the Sixer Market a touch better, here are your Bulls and Bears of the Week, going into today's round of fixtures!

IPL 2021 second-leg didn't start according to plan for the Chennai Super Kings as Mumbai Indians' new bowlers wreaked havoc in the powerplay overs. However, CSK had a saviour in Ruturaj Gaikwad, who played perhaps the knock of the tournament at the top of the order.

Gaikwad held one end up as he ensured CSK recovered from a dismal position to a match-winning scenario with a 58-ball 88. His blitzkrieg against Bumrah and Boult in the final few overs was a sigh of relief for CSK, who was down for the count early in the innings.

Gaikwad's brilliance ensured that his fantasy shareholders got a 20.83% bump in their investment, courtesy of a perfect match score of 150. This has taken his fantasy price to 66.20 Sixer Coins, which still has some room for improvement. With Gaikwad's form in the UAE being exemplary, he is surely one to watch out for in the Sixer Market!

The weekend had the T20 Blast 2021 Final's Day, which saw Kent beat Hampshire in the final. Although Kent captain Sam Billings led his side admirably, he couldn't fire with the bat in the middle-order.

In two outings on Saturday, Billings could only muster a match score average of 17.97 as he failed to sustain his attacking instincts in the middle overs for Kent. This resulted in a 14.78% decrease in his fantasy price, which currently reads 40.30 Sixer Coins per Share!

Although Sam Billings has seen a hefty loss in his fantasy price, he does feature in the IPL and the subsequent ICC T20 World Cup 2021, providing more opportunities for his existing and future fantasy shareholders to make good use of the opportunity in the Market. Given the talent that he possesses, Billings might not be a bad option at 40.30 Sixer Coins!

Speaking of talented players, Aiden Markram makes the cut as our second Bull of the Week! The South African batting all-rounder had an excellent week for the national side. A major part of South Africa's win against Sri Lanka in the T20I series, Markram came up with three consecutive match scores of 50 or more.

Markram registered a match score average of 88.89 against Sri Lanka, with his handy off-spin being a major asset. This resulted in his fantasy shareholders benefitting by 14.19% and taking his fantasy price to 63.00 Sixer Coins per Share!

In addition, Markram also earned his first IPL contract with the Punjab Kings, possibly as a back-up to the openers and Chris Gayle in the top-order. With the UAE pitches also being a touch on the slower side, Markram's all-round ability could be critical if he gets a chance to play in the playing 11. Only time will tell!

Last but not least is Evin Lewis, who unfortunately makes the cut this week as a Bear! Although Evin Lewis topped the run-scoring charts in the CPL, he didn't have the best of outings in the CPL Final.

He could only get a match score of 17.48 in the Final as the Patriots overcame this hiccup to clinch their first CPL trophy. This resulted in a price change of 9.1%, a significant decrease for a player of his quality. However, his price still reads 72.20 Sixer Coins, signifying the form that Lewis is in at the moment.

It is this form that has earned him a Rajasthan Royals call-up for the ongoing IPL. With Jos Buttler not being available for the second half, there is a void at the top of the order alongside Yashasvi Jaiswal. With Lewis' prior experience in the IPL and his form coming into this tournament, the southpaw could be in for a big game today as the Rajasthan Royals face Punjab Kings in Dubai!