Bulls & Bears of the Week: Gayle Storm Hits The Market With 22% Increase! 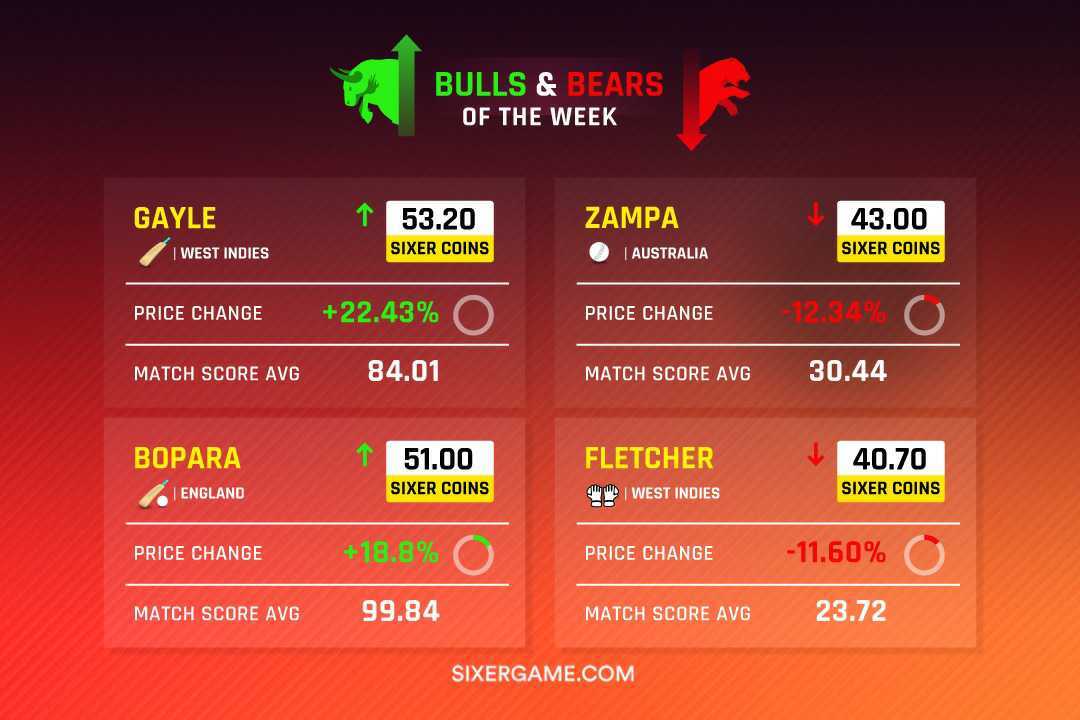 An action-packed week of cricket came to an end with the West Indies completing a series win against a depleted Australia side. In addition, multiple series in the international circuit with Ireland impressing against South Africa as well.

The Sixer Market provided numerous opportunities to earn big bucks, although with the likes of Saqib Mahmood and Shadab Khan handing out nice profits. However, only a few make the cut this week as the Bull and unfortunately a Bear. Without further ado, here are your Bulls and Bears of the Week!

Who else but Chris Gayle to kickstart this week's edition of the Bulls and Bears! Chris Gayle, who walked into the third T20I amid a poor run of form, had a lot of questions to answer regarding his place in the side.

With the likes of Hetmyer and Pooran available to take up the number three slot, Gayle had to come up with a big knock sooner rather than later. That is exactly what he did as he scored a brilliant 67 off just 38 balls. This helped him gain 22.43% over the week with a match score average of 84.01.

On the back of this knock, Gayle might have just sealed his place in the starting eleven. However, there's still a long way to go for Gayle as far as the T20 World Cup is concerned. But if he were to continue his new found form, his fantasy shareholders are in for a treat.

Sticking with the Windies, while Chris Gayle starred with the bat, Andre Fletcher didn't have the best times this week. Coming in for Evin Lewis, Andre Fletcher failed to capitalise on his opportunities.

Fletcher couldn't manage many runs with a match score average of 23.72. As a result, his price dipped by 11.60% to 40.70 Sixer Coins per Share. Generally an attacking batsman, Fletcher has been undone by quality swing bowling on both occasions. However, Fletcher has the experience to flip the script, and if he does, he could well make the cut as a Bull next time around.

Moving over to the T20 Blast, Ravi Bopara is having a brilliant season with Sussex. He came up with yet another telling performance in the previous round of fixtures. Against a decent Essex side, Bopara came up trumps with a fifty off just 37 balls.

This helped his price rise by 18.80% courtesy of a match score of 99.84. However, this hasn't come as a surprise to many, given his recent form in the T20 Blast. Batting in the top order, Bopara has made full use of his opportunity and has shown why he so highly rated in this format. At 51 Sixer Coins per Share, Bopara's fantasy stocks ought to be in high demand this week, with the T20 Blast league phase coming to an end! Watch out!

Last but not least is Adam Zampa, who makes the cut as Bear this week. Australia's premier leg-spinner, Zampa was expected to be their main bowler against the Windies. However, things haven't gone according to plan for the leggie.

Zampa has gone wicketless in this series with a match score average of just 30.44. He has seen a price drop of 12.34% with his price reading 43.00 Sixer Coins per Share. He has been undone by the left-handers available at West Indies' disposal with Chris Gayle and Shimron Hetmyer impressing against him.

However, Zampa is too good a bowler to be kept down for too long. Blessed with a good cricketing brain and a handy googly, Zampa will be key for the Australians in the ODIs, due to start early next week. With Zampa available for a 28-Match Low, he could be a great addition to your Sixer portfolio in the coming days.