The CPL League phase concluded with defending champions Trinbago Knight Riders and Guyana Amazon Warriors sealing a spot in the semi-finals. With two triple-headers in the CPL being sandwiched by a bunch of County Championship and international games, the Sixer Market was buzzing with trades all through the week. As is the case with other weeks, we had a few players stand up with noteworthy performances and some who couldn't quite grind it out on the field. Without further ado, here are your Bulls and Bears of the Week to get yourself going for the week ahead of the all-important IPL!

Chris Green didn't have the best of starts to his CPL 2021 campaign, picking only one wicket in the first seven games. However, Green has seen a resurgence in his form over the last week or so, with a match score average of 79.57 to show for his efforts.

Although the pitch did suit his off-spin, Green had to bowl the tough overs in the powerplay overs, something that he did well for the Jamaica Tallawahs. As a result, his price increased by a whopping 28.19%, taking his fantasy price to 63.00 Sixer Coins!

Green couldn't take the Tallawahs to the knockout phase but did his fantasy shareholders a world of good in the Sixer Market! With form on his side and the confidence of a fairly decent CPL campaign under his belt, Green could be a viable addition to your portfolio come the BBL or any other franchise league he may feature in 2021.

Moving on to our first Bear of the Week, we have Mushfiqur Rahim, who recently made his comeback from injury. A diminutive batsman who can score big runs in the middle order, Rahim couldn't come up with the goods against New Zealand's potent spin attack in the recently-concluded T20I series.

Rahim could only manage a match score average of 11.13, resulting in a price drop of nearly 17%. Although his price has dropped to 42.30 Sixer Coins per Share, Rahim provides value for money given his experience and skill. And with the ICC T20 World Cup fast approaching, Rahim might be a handy option to have in your portfolio.

Speaking about handy options for the ICC T20 World Cup 2021, Glenn Phillips has had a breakout season this year. The Kiwi, who has played in the T20 Blast, the Hundred and the ongoing CPL, has been consistent performer in franchise cricket for quite some time, and he showed exactly that in the last week or so.

Phillips registered a match score average of 61.20, including a match score of 131, courtesy of a blistering fifty in Barbados Royals' final CPL league match. This helped his price up by 17%, which should come as a boost to fantasy shareholders holding him for the longer run.

With Phillips set to play for the Rajasthan Royals and also feature for New Zealand in the World Cup, fantasy shareholders would be licking their lips over the prospect of him hitting big sixes in the UAE. But can he make an immediate impact for RR in the IPL? Only time will tell!

Last but not least is Rassie van der Dussen, who makes the cut as a Bear this week. The veteran top-order batsman couldn't get many runs, partly due to the exploits of top-order batsmen such as Reeza Hendricks, Aiden Markram and Quinton de Kock!

Dussen could only get a match score average of 14.41, resulting in a price drop of 14.68%. This has further pushed his price down to 35.50 Sixer Coins, a 15-game low for the South African! Like Rahim, Dussen also provides value for money with his busy style of batting. With the UAE conditions favouring middle-order batsmen, picking up Dussen before the WC frenzy kicks in might not be a bad idea. With Dussen set to feature against SL in the 3rd T20I, now might just be the right time as well! 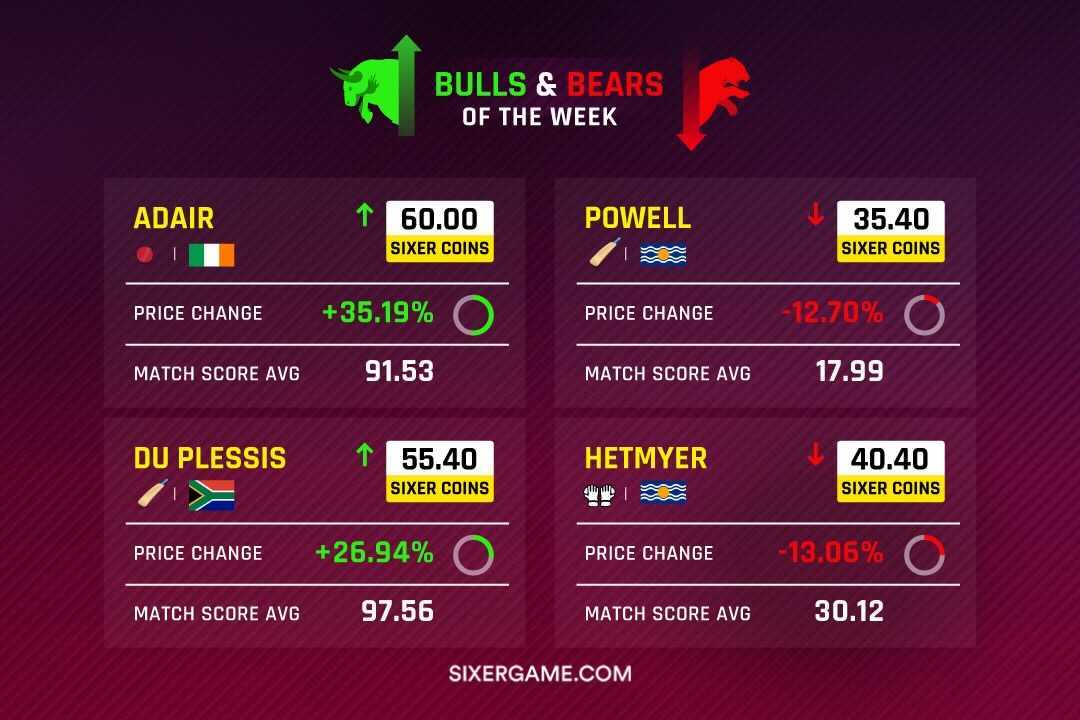