Bulls & Bears of the Week: Hafeez Stars With 40% Increase as du Plessis Starts Slow On Return 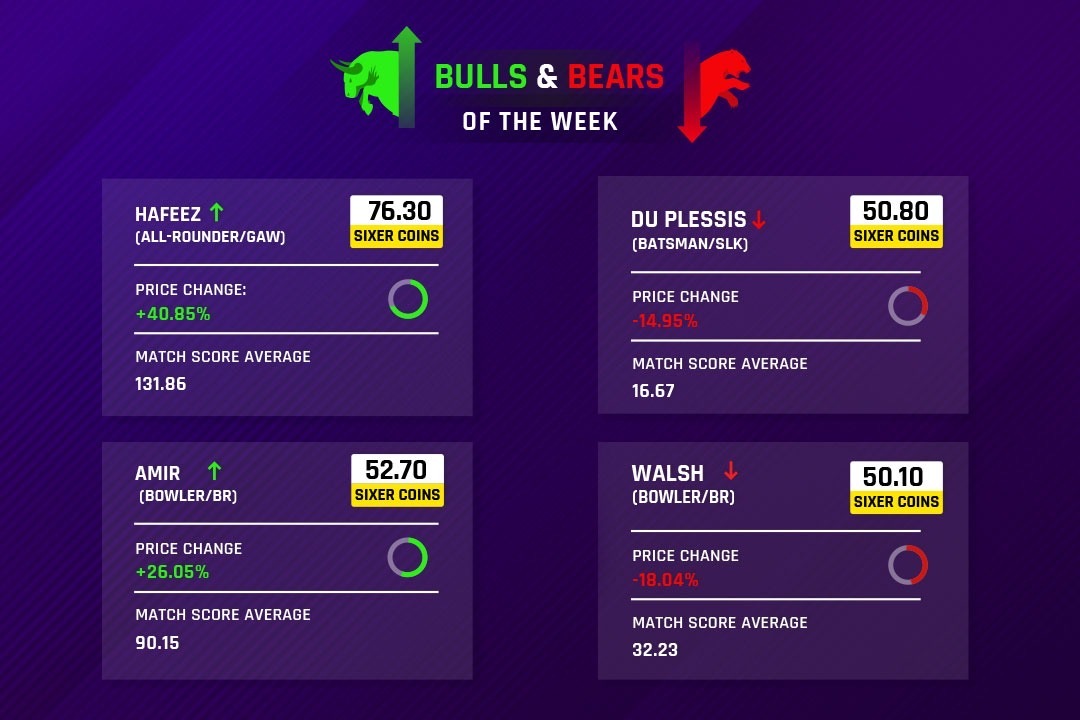 The Caribbean Premier League is now up and running and so are fantasy stocks in the Market! The Saint Lucia Kings have started off with three wins while defending champions Trinbago Knight Riders try to wrestle back some consistency as we enter Week 2 of the CPL. To get you back in the game after a day's break in the CPL, here are your Bulls and Bears of the Week!

First up is Mohd Hafeez, whose recruitment was met with some scrutiny. However, Hafeez has answered his critics with aplomb. Over the week, Hafeez achieved a match score average of 131.86 courtesy of two brilliant batting performances. His fifty against the Patriots was his first in a long time although it might not be his last in this year's CPL.

His price increased by a whopping 40.85%, taking it to 76.30 Sixer Coins per Share! Although this is slightly on the higher side, Hafeez's price still has some way to go in the Market. With the pitches getting slower, Hafeez's off-spin will also be key for Guyana, making for a good addition in the Sixer Market!

However, Faf's return didn't go according to plan. He could only muster a match score average of 16.67 with his price dropping by 14.95%. Although his price has dipped, Faf du Plessis provides a solid option for any team he plays in with his attacking batting. Although the nature of the pitches are an issue, Faf's ability to play spin holds him in good stead ahead of their next fixture against Trinbago Knight Riders.

Another player who will be in action today is Mohammad Amir as he and the Barbados Royals face Jamaica Tallawahs. The Royals come into this game on the back of a win, courtesy of Mohammad Amir and his brilliant bowling. The Pakistan pacer, who has been woeful in recent months, has regained some of the zip and incision that put him apart from his peers.

Mohammad Amir had two brilliant performances during the week with five wickets to his name. He achieved a match score average of 90.15, the highest for a bowler in the CPL so far. His price also saw a boost of about 26%, taking it to 52.70 Sixer Coins per Share! With the ball doing a bit in the early stages, Mohammad Amir is surely one to watch out for in the Sixer Market!

While Amir has starred with the ball for the Royals, this hasn't been the case for Hayden Walsh Jr. The leggie, who came into this tournament on the back of some good form, has been lacklustre so far. He hasn't been able to pick wickets, which has been a reason for Royals' struggles in the middle overs.

With a match score average of 32.33, Hayden Walsh has seen a price drop of 18.04%, a hefty loss for his fantasy shareholders. However, he and his fantasy stocks provide value at 50.10 Sixer Coins per Share. As previously mentioned, the pitches are likely to get slower as the tournament progresses. This should play into Walsh's hands, earmarking him as one for the longer run.