Bulls & Bears of the Week: Hatzoglou Takes Off In the Market as Tye, Abbott Falter 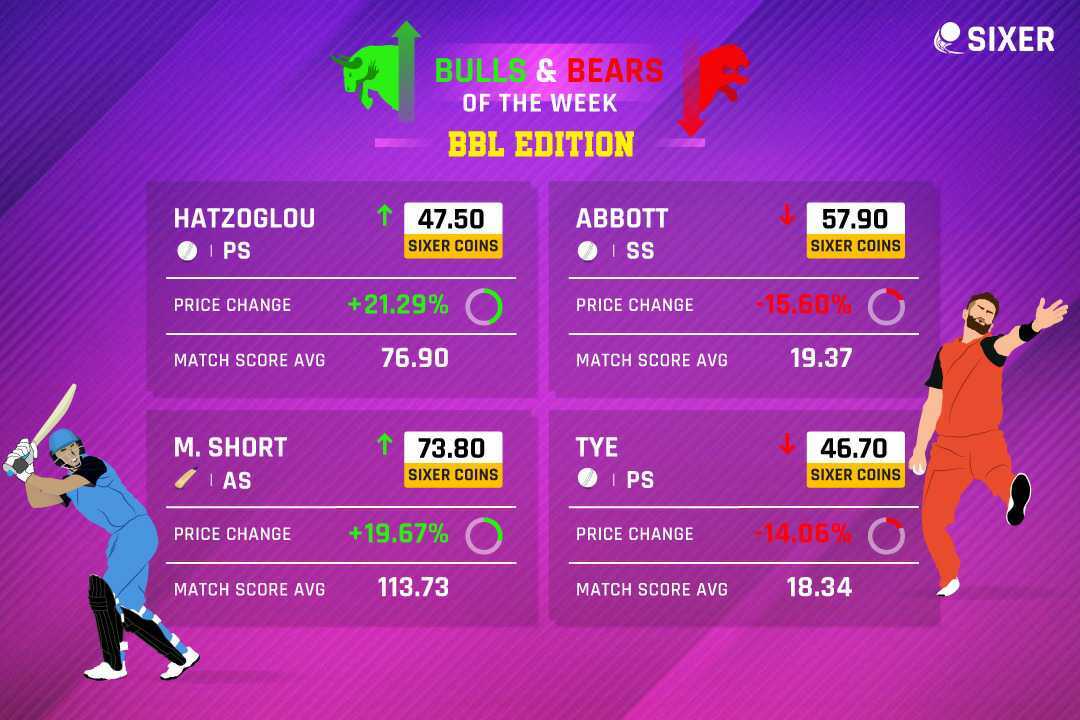 It's down to the last three games of the BBL league phase with fantasy shareholders reaping the rewards of their knowledge so far. But the job isn't done just yet. With the BBL playoffs on the horizon, the need for fantasy stocks is at an all-time high. Walking along the same lines, here are the Bulls and Bears of the previous week, to give you a headstart in the Sixer Market!

Peter Hatzoglou is a surprise name in the Bulls and Bears edition this week but there isn't anything surprising about his performances. The proactive leggie has been brilliant for the Scorchers across the season but over the last week, he has taken it up a notch.

Hatzoglou has seen his fantasy price increase by a massive 21.29% across the week. Although his match score average of around 77 doesn't really stand out, his effectiveness on pace-friendly tracks stands out. However, the job isn't done. Hatzoglou will be key in the BBL Finals with his leg-spin bound to have a say at some point over the next week or so!

While Hatzoglou has been balling out in Perth Scorchers colours, the same cannot be said about Andrew Tye. The star pacer, who wore the Golden Cap for the most wickets for over a month, has tailed off in the last week or so.

Tye's fantasy price has dropped down by 18% courtesy of a match score average of 18.34. The veteran has often erred in his line and failed to nail the yorkers in the death overs, something that wasn't seen so often in the early part of the tournament. With his experience bound to come into play in the BBL Finals, Tye at 57.90 Sixer Coins could be a fine addition to your fantasy portfolio.

Speaking of fine additions, Matt Short has been a revelation in the BBL this season with his performances over the last week only adding value to his case. The Adelaide Strikers all-rounder came up trumps with both bat and ball, helping his side in sealing a top-five spot.

As a result of his all-round performances, Matt Short averaged a match score of 113.73 over the last week, resulting in a price increase of 19.67%. Although Short didn't feature in the Adelaide Strikers' last league game, he is expected to return for the BBL finals and should be one of the most sought-after players in the Sixer Market!

Last but not least is Sean Abbott, who makes the cut as a Bear this time around. The Sixers bowler had a brilliant first half in the BBL, even turning out a performance for the ages against Brisbane Heat not too long ago. But this hasn't been the case over the last few days for the big Aussie pacer.

Abbott has only managed a match score average of 19.37 which has in turn resulted in a near 17% decrease in his fantasy price. He hasn't been able to pick as many wickets as he would have loved to. But like Tye, the other Bear on the list, Abbott is a multiple-time BBL champ and given his experience, he is surely one to watch out for!

With a few days left for the IPL, here's some much-needed insight to get yourself up to speed in the Sixer Market....