Bulls & Bears of the Week: Malik continues to defy age as Haider Drops by 12% 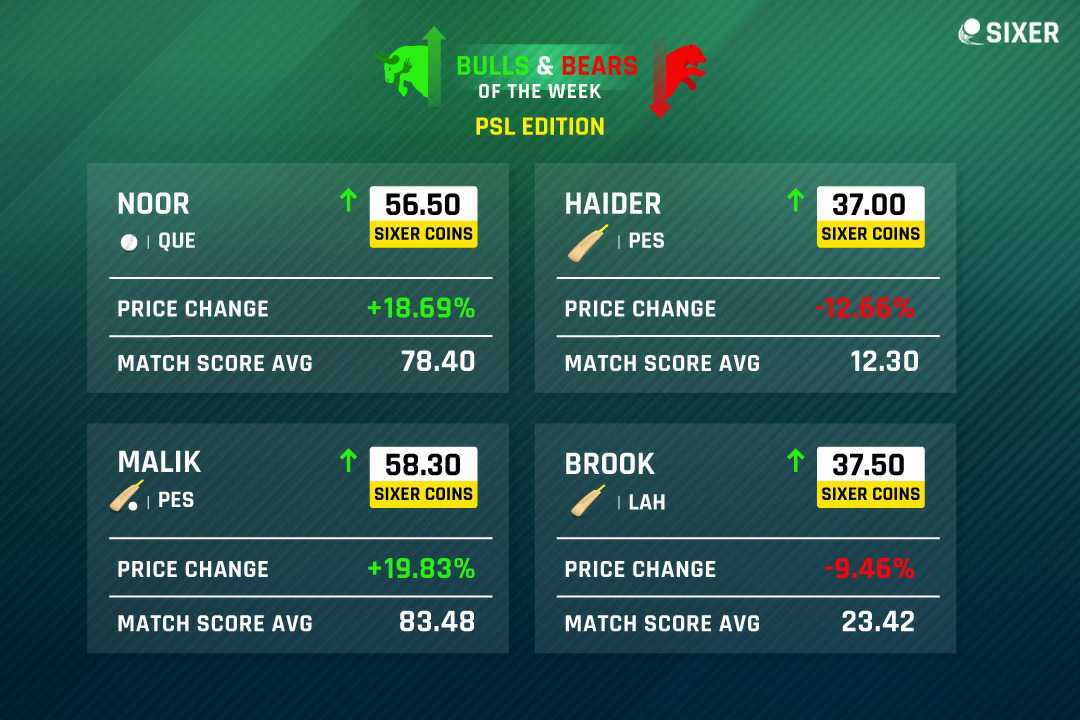 PSL action moved from Karachi to Lahore during the week although the action didn't stop enthralling fans around the world. Opportunities in the Sixer Market were still available with some players standing out with massive increases. As is the case every week, we have for you, the Bulls and Bears of the Week! Without further ado, here are the players that have made the cut this week.

Age is just a number and Shoaib Malik is hell-bent on proving the same. The veteran batter is on a roll in this year's PSL with his numbers speaking for himself. Malik was able to chip in with both bat and ball during the week, resulting in a match score average of 83.43. He saw his price increase by a whopping 19.83%, which given the arrival of Liam Livingstone in the Peshawar side, is noteworthy. With his price still at 58.30 Sixer Coins, surely Malik is bound to be a popular selection in the Sixer Market!

From one Zalmi to another, Haider Ali didn't have the best of weeks on the field. Although he did bat at the top of the order in one of the games, Haider just hasn't fired for Peshawar this season. He even came out to bat at number seven in his previous game with Livingstone and Malik being promoted ahead of him. With a price decrease of 12.66% during the week, Haider's fantasy shares are available for 37 Sixer Coins, which isn't a bad option at all. But will Haider regain his confidence and form? That is a question whose answer can earn you a fortune.

A surprise entrant, by all means, Noor Ahmad makes the cut as the second Bull of the Week. The Afghan leggie, who recently earned an IPL contract too, has been on a roll on the field. Noor picked up three wickets in two games, filling in the void left behind by Mohammad Nawaz's injury. He registered a match score average of 78.40 with a price increase of 18.69%. Like Haider, his fantasy shares that are priced at 56.50 Sixer Coins, aren't a bad choice at all. And with pitches likely to get slower through the competition, Noor could be the cherry on the top of your portfolio!

Last but not least is Harry Brook, who didn't have much to do during the week. With Fakhar Zaman and Kamran Ghulam impressing with the bat, Brook wasn't required as much with the bat in hand. But the Englishman has had a good PSL campaign so far, scoring runs down the order. Although Zaman and co have done well in the top-order, Brook could be in high demand given his price and utility in the backend of the innings. But will be able to live up to the hype? Only time will tell!