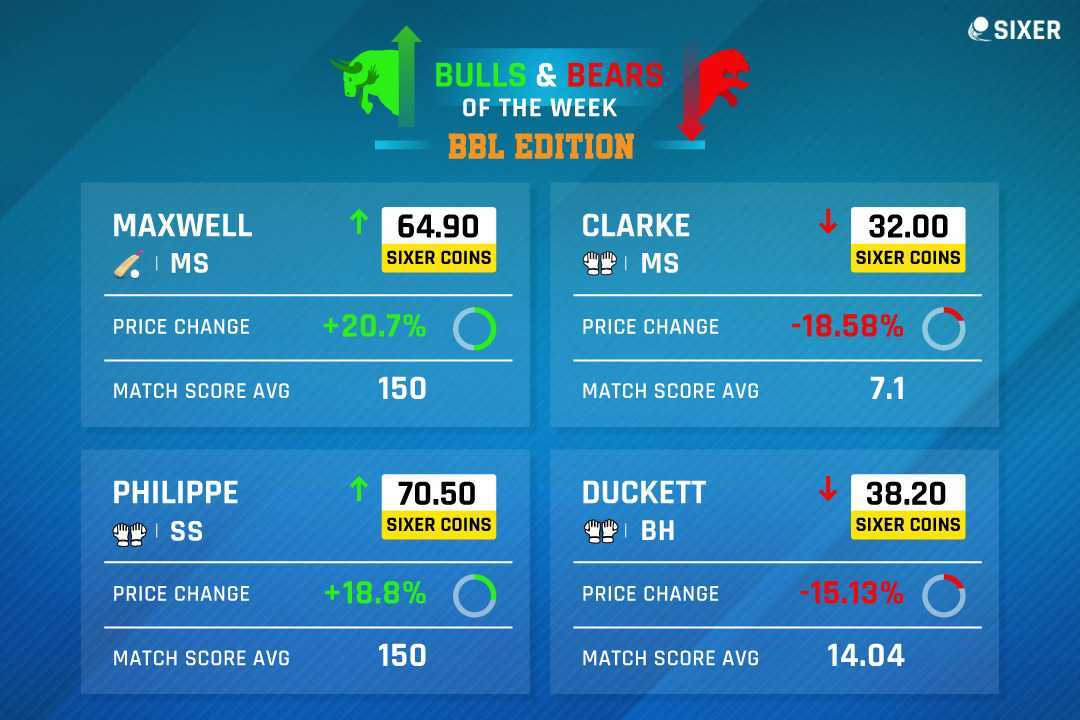 The Sixer Market saw its fair share of entertainment despite the BBL going on a hiatus for a few days. But even in the handful of matches that took place, Sixer fantasy users were bang on the money with some of their trades. But the question as to how and on which players they made their profits is something we will take you through. So without further ado, here are your Bulls and Bears of the Week!

Glenn Maxwell didn't have the best of starts to his BBL campaign but when the Sixers came around to the MCG, he was hell-bent on proving a point with the bat. Maxwell scored his first BBL ton, notching up 103 runs in just 57 balls. He cleared the boundary on 15 occasions, three of them being massive hits over the boundary line.

As a result of his monumental knock, Maxwell secured a near 21% increase in his fantasy price, courtesy of a 150 match score. The Stars captain chipped in with the ball as well but wasn't able to get his side over the line. However, his fantasy shareholders wouldn't mind as long as Maxwell sustains his newfound form with the bat in hand!

While one Star stole the show with a century, there was another Stars player in Joe Clarke, who had a forgetful day in the office. Joe Clarke, who also made the cut for the wrong reason last week in our Bulls and Bears edition, couldn't do any better this time around.

Clarke failed to get off the mark yet again as he could only muster a match score average of 7.1. This has hit Clarke's fantasy price hard with his shares available for a mere 32 Sixer Coins. Although poor form continues to trouble him, Clarke is a fine player who should come good if given a longer run. Will the Stars oblige is the real question!

Now we did mention that the Stars couldn't get over the line against the Sixers despite Glenn Maxwell's perfect match score of 150! That was because the Sixers had Josh Philippe come up with a similarly brilliant knock that earned him a perfect match score. Unlike Maxwell though, Philippe was left stranded at 99*.

But this didn't negate his impact on the game as he earned a man-of-the-match award and a fantasy price increase of 18%. This knock, however, is just a mere extension of his rapid start to the BBL season. His fantasy price is up by over 30% in the BBL already and if he were to continue the same form, there's no telling how high his fantasy stock price could rise upto!

While Aussies continue to rise in the Sixer Market, it hasn't been the best of weeks for fantasy shareholders of English players at all - be it Ashes players or BBL players! Ben Duckett makes the cut as the second Bear of the Week after a lackluster outing at the Gabba against the Sydney Thunder.

Duckett couldn't get into double figures as the Heat were blown away by a Saqib Mahmood-led Thunder onslaught with the ball. As a result, Duckett's fantasy price is down to 38.20 Sixer Coins, which may open a fair few opportunities for potential trades. Given Duckett's knack of scoring runs in this format, surely he is one to watch out for in the Market, right?