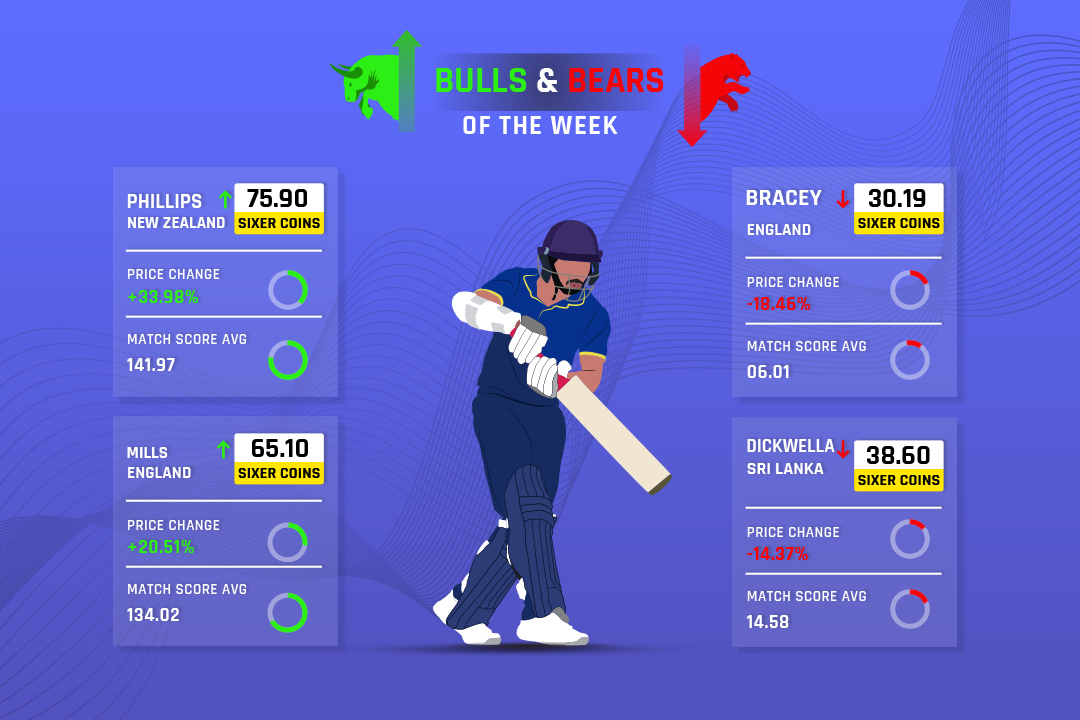 The Sixer Market saw its fair share of ups and downs over the past week. While the Pakistan Super League came to an end, action in England, including the T20 Blast, WTC Final and the T20I series between England and Sri Lanka, didn't disappoint.

As is the norm in an ever-changing market, we have a new player atop the Sixer valuation charts with a select few also starring for their respective teams. Similarly, there were a few who underwhelmed during the week. Without further ado, here are the Bulls & Bears of the Week!

Yes! Kiwi batsman Glenn Phillips is the new leader in the Sixer Market, seeing a 33.98% increase over the last week. Playing for Gloucestershire, Phillips led them to comfortable wins at the expense of Sussex and Glamorgan.

This was always on the cards for Phillips, who is one of New Zealand's brightest prospects in the limited-overs formats. With his price trading at an all-time high of 75.90 Sixer Coins, Phillips has already gone some way in delivering on his potential!

Sticking with Gloucestershire, James Bracey couldn't deliver on his potential this week, seeing his price drop by a whopping 19%! Returning from international duty, Bracey couldn't get going at all, with a paltry match score average of 6.01.

Although Bracey is playing in the top-order, he has failed to grab the initiative so far, resulting in his price reading 30.90 Sixer Coins! As Phillips continues to plunder runs in the middle order, Bracey could well use the opportunity to get himself in.

While he is viewed as a red-ball specialist, Bracey is much more than that. Blessed with a good technique and an eye for a boundary, Bracey will be itching to overturn his form soon and could well turn up in next week's edition as a Bull!

There were some rumours floating around over Tymal Mills' inclusion in the white-ball formats. Even Eoin Morgan acknowledged Mills and his viability. With everything being said and done, Mills went a step further as he registered the highest match score in the T20 Blast for a bowler!

Mills was at his supreme best against Gloucestershire with a match score of 134 and figures of 3 for 20. He even scored some runs with the bat, which added to his stock price of 65.20 Sixer Coins per Share! His price has seen an increase of nearly 21%, again the highest for any bowler in this T20 Blast this season.

Capable of bowling at over 150 kmph and able to outfox batsmen with his clever back-of-the-hand slower balls, Mills is the complete package. The prospect of him, Jordan and Archer replicating their Sussex fortunes with England is mouthwatering, but only time will tell if Mills can make a successful comeback.

It's been a tough week for Niroshan Dickwella. For starters, Dickwella wasn't in the SL playing 11 in the first game and had to wait an extra day to make his first appearance.

However, Dickwella couldn't get going in the next two games as he could only muster a match score average of nearly 14. His price also dropped by 14% during the week, causing his price to fall to 38.60 Sixer Coins per Share!

But Dickwella's week went from bad to worse when he was sent back to Sri Lanka owing to a bubble breach, along with Avishka Fernando and Danushka Gunathilaka. For all fantasy shareholders of Dickwella, they might have to wait sometime for Dickwella to get back into action, but it could be worth the wait given his enormous talent and potential.