Bulls & Bears of the Week: Rahul Soars by 18% as Mustafizur Fizzles Down in the Market 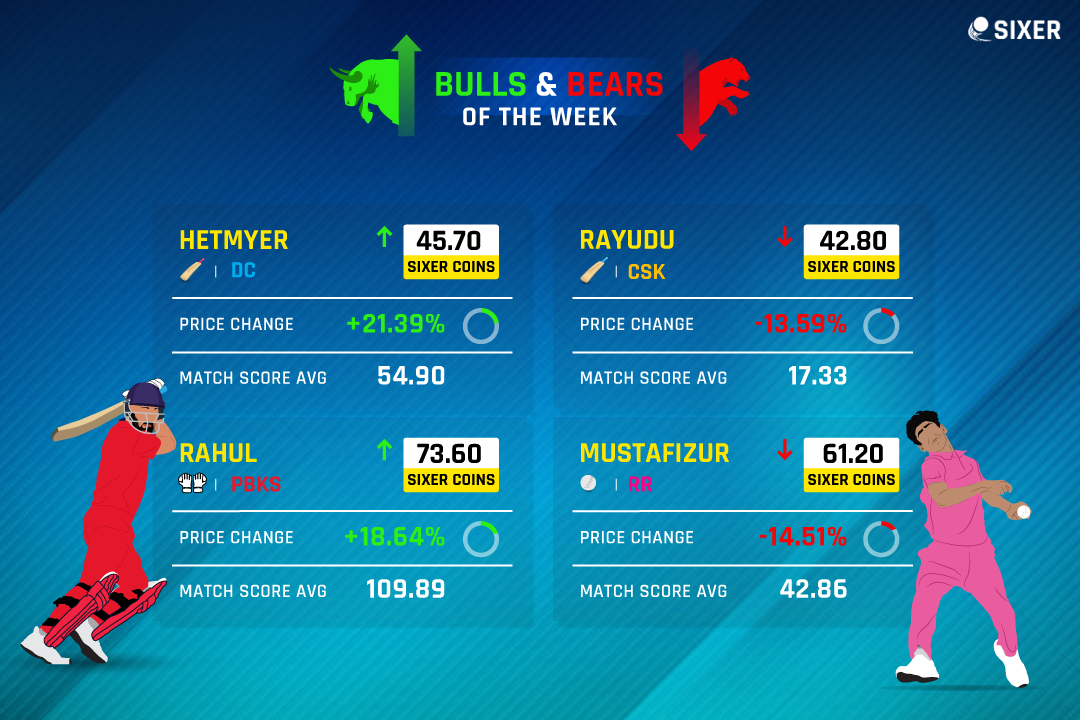 The T20 season continues giving out opportunities in the Sixer Market! As the IPL league phase came to an end, the IPL playoffs, along with the fast-approaching ICC T20 World Cup 2021, also adding another dimension to the Market!

Lokesh Rahul didn't have the ideal UAE leg leading up to the final week. The Punjab Kings captain was often subdued in his approach at the top of the order, although with good reason. But in the final week, Rahul came up with two brilliant fifties, one of them being a sensational knock against the Chennai Super Kings.

His blitzkrieg against Chennai Super Kings earned him a perfect match score of 150, helping his price up by 18.64% for the week. Although Punjab couldn't qualify for the playoffs, Rahul hitting peak form only bodes well for India, who may prefer KL Rahul over Ishan Kishan and possibly Kohli to partner Rohit at the top of the order.

Moving on to the Bears, Ambati Rayudu didn't have the best of the weeks with a match score average of 17.33. His price went down by 13.59%, one of the steepest declines in the Sixer Market. While Rayudu came up with a good knock against Delhi Capitals, his week spiralled from that point.

He couldn't get going against both the Punjab Kings and Delhi Capitals, this time in the Qualifier 1. He was undone by Chris Jordan against Punjab although the designated finisher couldn't get CSK out of a hole against Delhi. Despite the decline in his fantasy price, Rayudu has been one of the more effective batters in the death overs, making him a handy pick in the IPL Final at just 42.80 Sixer Coins per Share!

One batter who had a great outing in the Qualifier was Shimron Hetmyer, who also made it as a Bull last week. Hetmyer has been in fine form for Delhi Capitals this season, and it showed in the last week or so. Despite the likes of Shaw and Pant impressing in patches, Hetmyer showcased his class in his last few games.

Hetmyer accumulated a match score average of 54.90 despite batting lower down the order, earning him a price increase of 21.39%! The southpaw finished well against the likes of CSK and RCB, which holds him in good stead. With Hetmyer likely to take up a middle-order role for West Indies in the T20 World Cup, he is surely one to watch out for in the Sixer Market at 45.70 Sixer Coins per Share!

Last but not least is Mustafizur Rahman, who ends up as Bear this week. While Mustafizur's variations were earmarked to wreak havoc in the latter half of the UAE leg, he couldn't really get going with a price decrease of 14.51% courtesy of a match score average of 42.86.

Mustafizur didn't pick many wickets in his last few games with his cutters not doing justice on sluggish UAE wickets. The left-arm did show glimpses of his ability, which may have a big impact in the upcoming ICC T20 World Cup 2021. Can he hit back in the Sixer Market? Only time will tell!