Bulls & Bears of the Week: Short Goes Long as Conway Stock Drops by 11%! 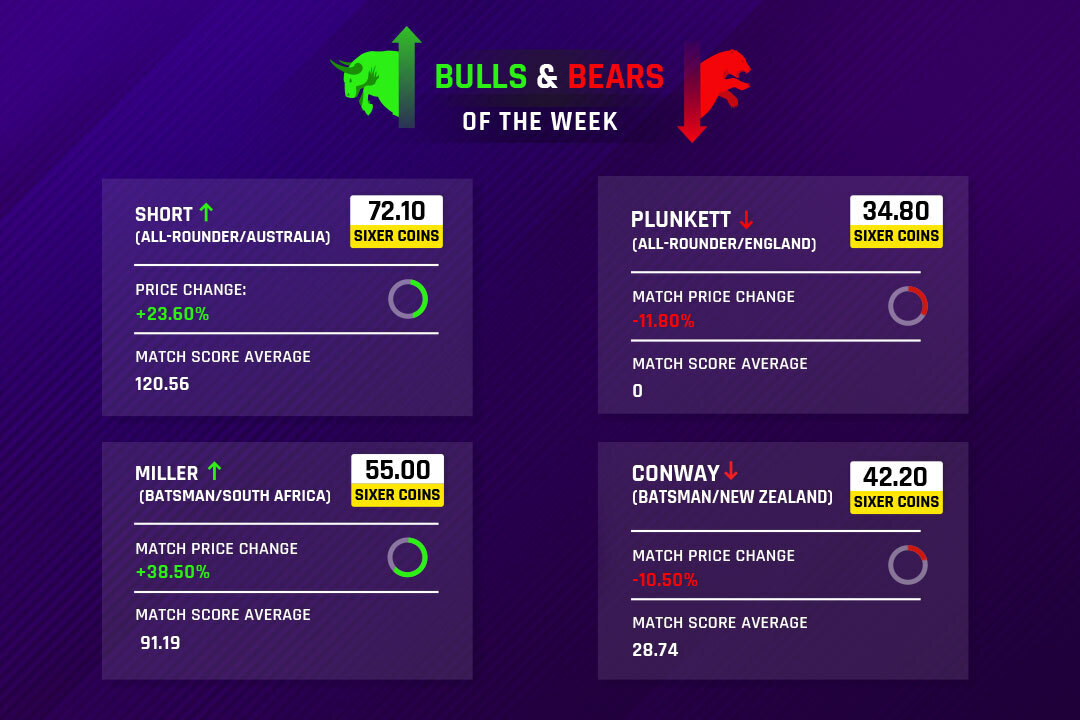 Another entertaining week goes by us, but this one had something that no other week in the Sixer Market or cricket had - the Hundred! Yes, the Hundred finally kickstarted a plethora of cricketing action, which included India vs Sri Lanka ODIs and T20Is and the Royal London One Day Cup as well. With some of the biggest names in world cricket in action, it was indeed a brilliant week to be a cricket lover.

However, only the best of the best can survive in the Sixer Market, and as usual, we've handpicked the best and the not-so-good performers over the week. Without further ado, here are your Bulls and Bears of the Week!

The Hundred has seen its fair share of action already, but the star of the tournament so far is arguably D'Arcy Short. Turning up for the Trent Rockets, Short was unstoppable on his debut as he smashed a 41-ball 51! Although he lost Alex Hales early in the run chase, he aced the threat of the Southern Brave bowling attack with relative ease. However, this was merely a glimpse of what Short managed in his final T20 Blast game with Hampshire, for whom he registered a match score of 150.

The southpaw oversaw a massive increase of 23.60% during the week, courtesy of a match score average of 120.56. With the pitches in England slowing down due to the amount of cricket being played, D'Arcy Short could well be a regular in our weekly editions of the Bulls and the Bears!

While one southpaw went the distance, it wasn't the best of weeks for Devon Conway. The Kiwi, who has been the star of the summer so far, failed in both his games during the week. While he was undone by David Payne in his final T20 Blast match for Somerset, Conway couldn't get going in his first Hundred game against the Trent Rockets. He could only manage 18 runs off 21 balls, a kind of knock that isn't Conway-esque.

As a result, Conway's price has dipped by 11%, with a match score average of 28.74, not doing his talent any justice. However, this opens up a fine opportunity for Sixer fantasy shareholders to buy into Conway's fantasy shares, which are now available for a 5-Match low of 53.90 Sixer Coins per Share! Can he get going against the Welsh Fire today? Only time will tell!

While we wait for a verdict on Devon Conway, David Miller grabbed the initiative over the week as he makes the cut as a Bull this week. The southpaw starred for the South Africans as they completed a white-wash over the Irish in the T20I series.

Miller's stock price increased by a whopping 38.50%, with his match score average of 91.19 being just the tip of the iceberg. His sensational knock in the second T20I, in which he took South Africa from the jaws of defeat to the doorstep of victory, showed us why he is one of the most dangerous players in this format. With the T20 World Cup on the horizon, he is surely one to keep an eye out for in the coming weeks.

Last but not least is Liam Plunkett, who featured in a game of cricket for the first time this summer. The 2019 World Cup-winning all-rounder didn't have the best of games as he managed a match score of ZERO! Yes, you read that right. The veteran couldn't hold his own against the mighty Harry Brook, who has arguably been the best batsman in this tournament so far. As a result of Brook's blitzkrieg, Plunkett's price plunged by 11.80%.

Although Liam Plunkett didn't have the best of outings, he is still a brilliant white-ball bowler. Capable of bowling the hard lengths and nailing the yorker at will, Plunkett was a crucial asset in England's white-ball set-up not too long ago. With Welsh Fire set to play a couple of home games in the next week or so, expect Plunkett to roar back with an imperative performance on the field and in the Sixer Market!