Bulls & Bears of the Week: Short Goes Long in the Market as Green, Clarke Falter 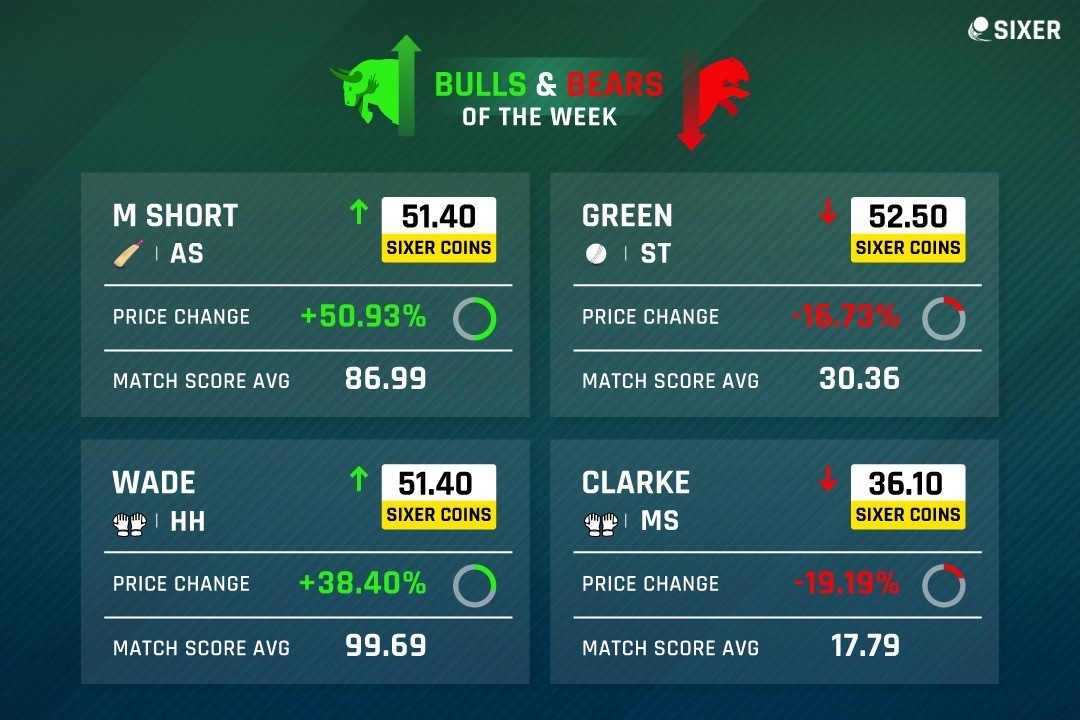 The Big Bash League has been enthralling Sixer fantasy users for the last week or so, providing entertainment and openings for potential trades in the Sixer Market. The action is just expected to grow in leaps and bounds with the 2nd Ashes Test also coming into the fray later this week. But with the BBL going strong, we cast an eye towards the best performers and a couple of not so great performers in the BBL so far. So without further ado, here are your Bulls and Bears of the Week - BBL Edition!

The Adelaide Strikers suffered a blow with Alex Carey's national call-up, leaving a spot open at the top of the order. However, they don't have much to ponder upon on that front with Matt Short silencing his critics with consistent performances so far.

The lanky top-order batter has been Adelaide Strikers' best batter with over 140 runs to his name in three games. He has also chipped with the ball, picking one wicket. As a result, Short has seen his price increase by 50.93%. While his match score average reads 86.99, the Strikers will be hoping for Short to continue his fine form at the top of the order while the duo of Jake Weatherald and Rashid Khan find their footing in this season's BBL!

Chris Green makes the cut as a Bear in our first BBL 2021-22 edition of the Bulls and Bears! Green, who is the stand-in Thunder captain for the season, hasn't been able to star with the ball like he usually does. Although Green isn't known for his wicket-taking ability, economy, which is usually his USP, has been a let down so far.

As a result of Green struggling in the middle overs, he has seen his fantasy price drop down to 52.50 Sixer Coins, a near 17% decline in BBL 2021-22. But Green is a vastly experienced campaigner whose rough patch of form cannot overshadow his potential. With pitches likely to get slower as the tournament progresses, perhaps the best of Green is still to come.

Matthew Wade is having a career year in T20 cricket and it just keeps getting better for the Aussie international. The southpaw, who is expected to feature for the Hurricanes for the whole season, couldn't get going in his first game against the Sixers. However, Wade unleashed upon the Sixers a couple of days later, scoring the fourth fastest fifty in BBL history.

Wade smashed the likes of Tom Curran and Chris Jordan to all parts of the ground en route to a 46-ball 93. As a result of his exploits in his first two BBL 2021-22 games, Wade's price has skyrocketed by 38.40% with a perfect match score to go hand-in-hand. But again, Wade has been doing this for a few seasons now in the purple of Hobart. With the Scorchers in line to stop the southpaw, all eyes will be on Matt Wade at the Bellerive Oval today!

Last but not least, as always, is the second Bear of the Week, who happens to be young Englishman, Joe Clarke. The wicketkeeper batter was earmarked by many as one to watch out for in the BBL given his exploits in the Hundred and the T20 Blast. However, in three BBL games so far, Clarke hasn't managed many runs.

His match score average reads 17.79, resulting in a price decrease of 19.19%. However, his potential is immense, especially in the shortest format. He was even retained by the Karachi Kings for the next PSL, which should hold him in good stead going forward. With his fantasy stocks trading at 36.10 Sixer Coins, Joe Clarke could be a popular selection in the Sixer Market over the next week!