Bulls & Bears of the Week: Stirling Stars on the Big Stage as Bedingham Stock Drops by 17% 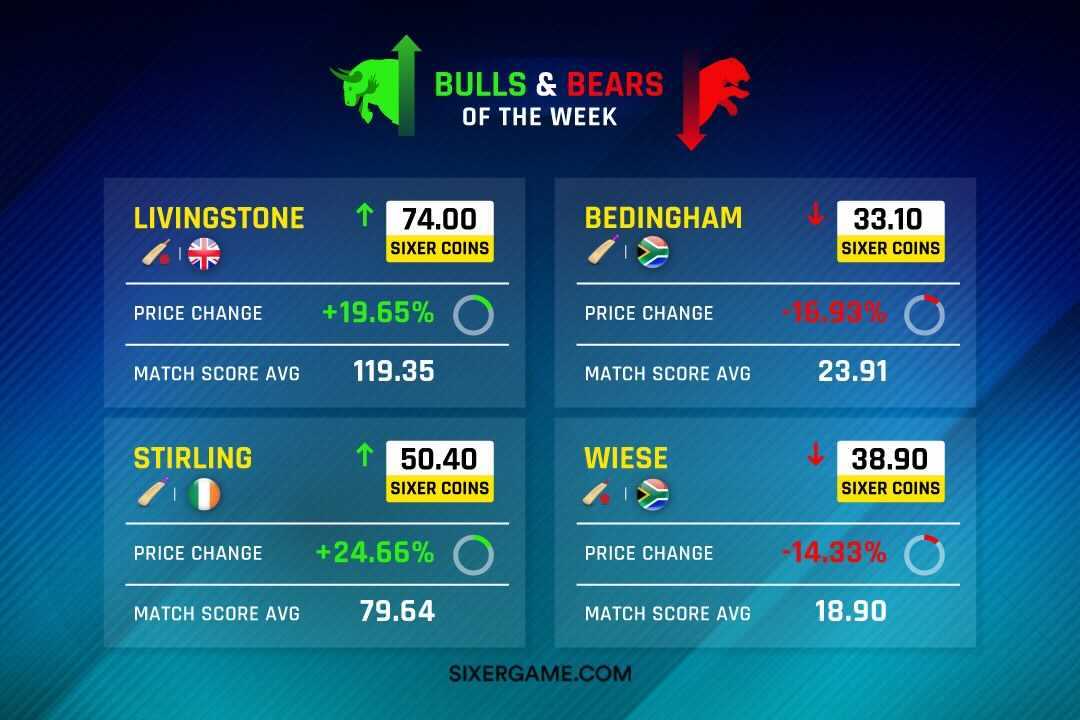 The Hundred, unfortunately for the Sixer Market enthusiasts, came to a close as the Southern Brave clinched a stunning win against the Birmingham Phoenix. As the Hundred came to an end, so did the week and that only means one thing - the Bulls and Bears of the Week! So without further ado, here's some much-needed insight to get you up and running in the Sixer Market!

The English summer has genuinely belonged to Liam Livingstone, who has established himself as a force to reckon with in the shorter formats. However, Livingstone upped his game in the Hundred over the last week or so to cement his standing as a certified Bull of the Sixer Market!

Livingstone registered one of two perfect match score of 150 in the final round of fixtures in the Hundred, smashing a whirlwind 92 against a shell shocked Northern Superchargers side. He followed it up with another explosive knock in the final as well. However, he couldn't take his side to the trophy. Nevertheless, his fantasy shareholders saw him register a match score average of 119.35, resulting in a massive increase of 19.65%!

Although Livingstone is at an all-time high at the moment, his fantasy stocks, priced at 74.00 Sixer Coins per Share, are still one of the most sought-after ones in the Sixer Market! With the IPL fast approaching, Livingstone could well break the shackles yet again and top the Sixer Market in the near future!

However, he had a chance at redemption with the Birmingham Phoenix as he replaced Finn Allen at the top of the order. But it was just more of the same for Bedingham, who couldn't make much of his unique opportunity in the Hundred. As a result, he could only manage a match score average of 23.91, resulting in a price decline of 16.93%!

But this shouldn't be the last time we see David Bedingham in the Sixer Market or the English summer. There's still some cricket left to be played, and with his fantasy stocks trading at a paltry 33.10 Sixer Coins per Share, Bedingham is surely one to keep tabs on in the Market!

Cometh the Hour, Cometh the Man, and it was Paul Stirling, who inked his name into the Southern Brave folklore with a man of the match performance in the Final. In the lead-up to the knockouts, Stirling didn't get many runs under his belt, with a few fans even calling for Devon Conway to be reinstated back into the batting unit.

However, Stirling has other ideas. The burly opener announced himself in the tournament with two brilliant knocks against Birmingham Phoenix and Trent Rockets to lead Southern Brave to the championship. His exploits earned him and his fantasy shareholders a 26% increase courtesy of a match score average of 79.64.

A 26% increase may seem a lot in the Sixer Market, but Stirling is just getting started. With the Zimbabweans set to take on Ireland later this month, Paul Stirling will look to sustain his newfound form and do his stock price a world of good again. If he does succeed, his current fantasy stock price of 50.40 Sixer Coins per Share may well be a bargain!

Last but not least, our final Bear of the Week is South Africa-born Namibian all-rounder David Wiese. The lanky all-rounder, who was brought in by London Spirit as a replacement for Mohd Nabi, couldn't do justice to his talent with a couple of lacklustre performances in the Hundred.

Wiese couldn't do much with bat or ball as he only managed a match score average of 18.90. Although his price drop of 14.33% hasn't really put a big hole in the pocket, Wiese's recent form is a slight concern. Again, Wiese has the experience to overturn his fortunes.

Blessed with variations and explosiveness, Wiese is the kind of player you would want to have in your side, providing balance and depth. But can he deliver when it matters for Sussex and potentially Namibia in the upcoming ICC T20 World Cup 2021? Only time will tell!