Bulls & Bears of the Week: Tough Week for Malan As The Hundred Looms Large! 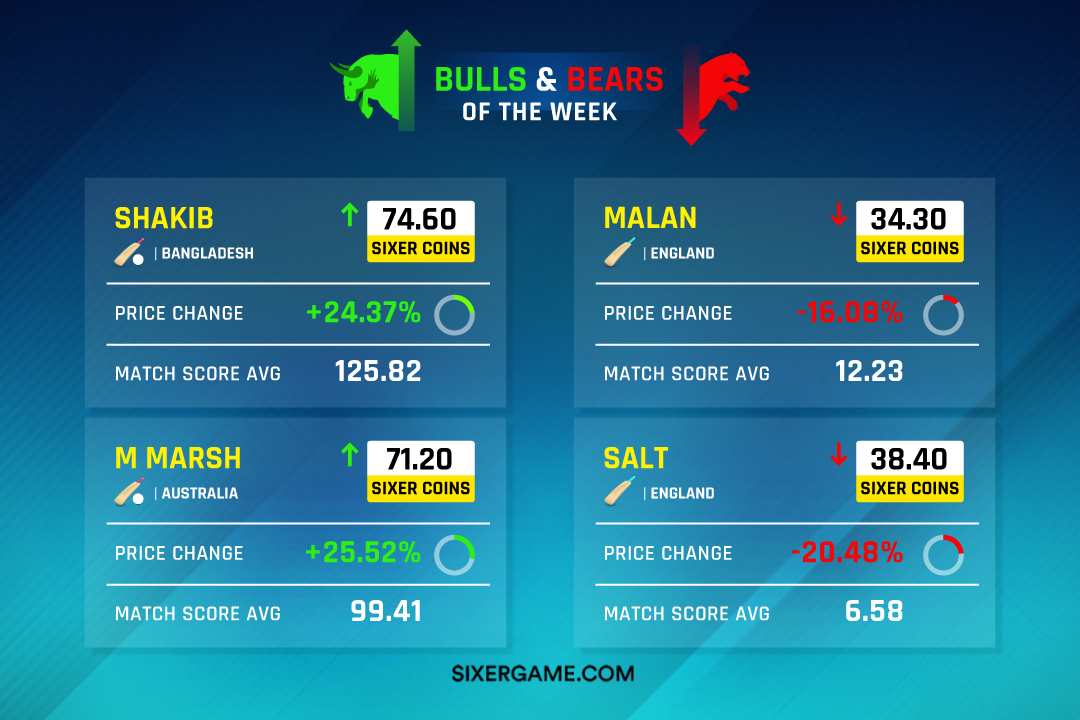 Cricket fans had another ball in the Sixer Market, which saw a lot of action unfurl. Right from the West Indies to England and Sri Lanka, players from all over the world turned up for some cricket. There was quite some demand for a lot of players, but only a few make the cut as the Bulls and, unfortunately, Bears of the Week. Without further ado, here's some much-needed insight to kickstart your day!

First up is Shakib Al Hasan, who overcame his shortcomings in the Test format with a sensational showing in the ongoing ODI series against Zimbabwe. In two games, Shakib has starred with both bat and ball, including a match-winning 96* in the second ODI!

Shakib has seen his price risen by 24.37%, courtesy of a match score average of 125.82, the highest in the last week or so for any player in the Sixer Market! Although he couldn't come up trumps with the bat in the first game, the left-arm spinner was sensational with the ball, giving the ball a fair rip. With Zimbabwe set to face the wrath of Shakib, the Bangladesh all-rounder could be in for a Sixer Market-topping phase in the next week or so!

While one southpaw led his nation to a big one in a chase, another southpaw in Dawid Malan had a week to forget. The former number one ranked T20I batsman Malan couldn't buy a run as his price dropped a whopping 16%. He hasn't hit a boundary in three outings against Pakistan, who have had no trouble in getting the better of him.

A match score average of 12.23 is dismal for a player of Malan's talents. His price reads 34.30 Sixer Coins, which might be quite low for him, although it just opens an opportunity for a trade. While Malan might sit the next T20I out, he is surely in for a busy phase with the Hundred. Can he make it big in cricket's newest format? Only time will tell!

What time has already told us is how good a player Mitchell Marsh is, both with bat and ball. Although he has grossly underperformed, Marsh was easily the best player in the Australian camp in the T20I series. While his colleagues failed to strike a chord with consistency, Mitchell Marsh didn't follow suit.

Mitchell Marsh was Australia's top run-scorer in the series with a match score average of 99.41. He even had a 150 match score in the fourth T20I, the only match Australia won in the T20I series. Even his bowling came along well, which only bodes well for him and his fantasy shareholders ahead of the ODI series. Against a youthful West Indies side and with Aaron Finch injured, Marsh could be in for another big week in the Sixer Market.

Last but not least is this week's second Bear, Philip Salt. Like his national teammate Dawid Malan, Salt had a dismal week with Sussex. In two games, Phil Salt could only manage a match score average of 6.58. Although Sussex managed to win one of the two games, they weren't helped by Salt's ultra-attacking approach going wrong.

Salt, in the mould of a Brendon McCullum or a Prithvi Shaw, looks to attack the bowlers from ball one. Sometimes it comes off; sometimes it doesn't. However, Salt is too good a player to be kept down for long. With the Hundred coming up, Phil Salt could be in for a big tournament. If you think so, 38.40 Sixer Coins is all it's going to take to add him to your portfolio!