Bulls & Bears of the Week: Vilas Stars With 23% as Qais, Payne Falter in the Sixer Market! 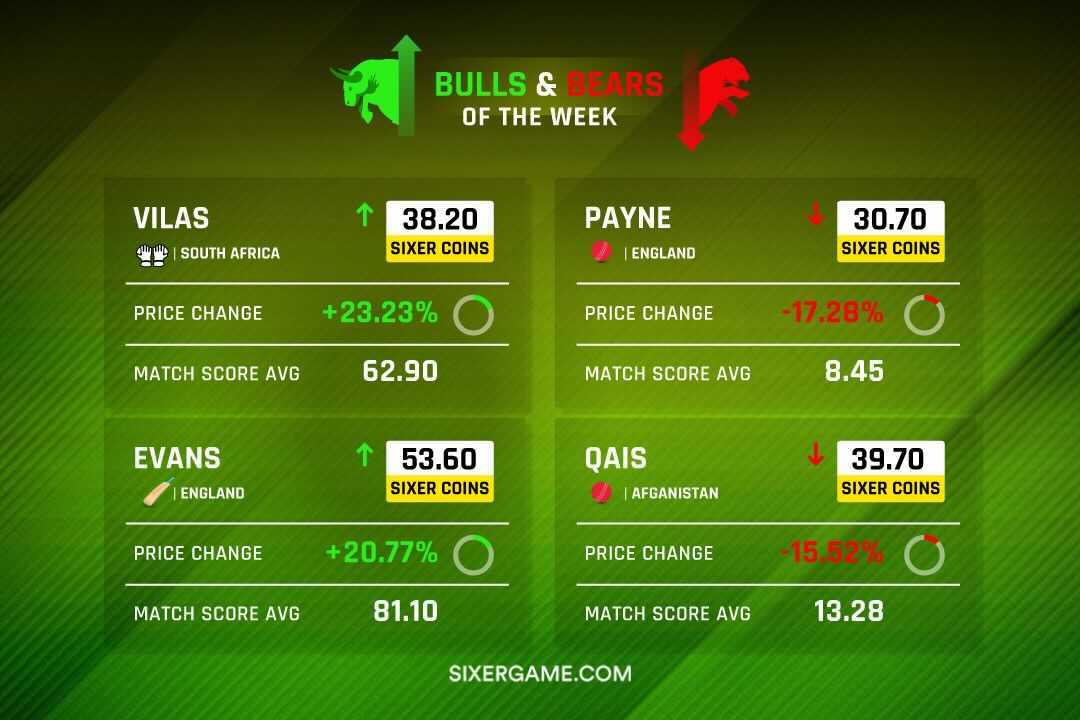 Another action-packed week goes by in the Sixer Market with the Hundred entering the business end. While the Birmingham Phoenix, Trent Rockets and Southern Brave have already sealed their places in the last three, there's obviously a lot in store for the players.

Fantasy shareholders enjoyed a fruitful week in the Sixer Market with quite a few opportunities popping up. While the likes of Mohammed Siraj and Will Jacks starred with ball and bat respectively, there were others who outshined them in the Sixer Market. Without further ado, here are your Bulls and Bears of the Week!

Vilas was at his best in the last week or so with a match score average of 62.90! Although it may not seem like a big number, Vilas held the fort in the middle-order with his counterattacking knocks. His price increased by 23.23%, by far the most significant increase over the last week.

Now although the Northern Superchargers have only one game remaining in the Hundred, Vilas is set to feature in the County Championship and in the T20 Blast later in the month, meaning opportunities aren't an issue for the veteran. Having said that, the demand for Vilas' stock at 38.20 Sixer Coins is something to watch out for! If you think he can make it big, the Sixer Market is the place to be at 2:00 PM and 7:00 PM IST daily!

Next up is our first Bear of the Week, Gloucestershire and Welsh Fire bowler David Payne. David Payne is a lanky left-armer who can swing the ball at a decent pace. He recently made his international debut as well although this week hasn't been the best one for him in the Sixer Market!

Like the Welsh Fire, David Payne put in two lacklustre performances with a match score average of 8.45. This resulted in a price drop of 17.28% with his stock now reading 30.70 Sixer Coins per Share! He wasn't able to buy a wicket in the two games he played during the week, leaving fantasy shareholders undone.

However, this isn't the end of the world for David Payne. Like Vilas, Payne is also set to play in the County Championship and in the T20 Blast knockouts. He will be keen to get the better of opposition batsmen and look to make amends for a disappointing Hundred campaign, which comes to an end this Wednesday.

While David Payne had a woeful week in the Sixer Market, that wasn't the case with Laurie Evans. The Oval Invincibles batter has often batted lower down the order, a position that he isn't accustomed to batting at. However, Evans' class and talent outshined the challenges over the week.

Laurie Evans smashed a whirlwind fifty against the Manchester Originals, earning him a match score in excess of 100. Over the week, Evans averaged a match score of 81.10 with a price increase of 20.77% to show for his efforts. Although he couldn't come up trumps in the Oval Invincibles' do-or-die game against Southern Brave, Laurie Evans did no harm to his stock price, earning the Bull tag for this week.

Last but not least is Qais Ahmad, who makes the cut as a Bear. Having made a brilliant start to the Hundred, Ahmad's form has tailed off, resulting in the Welsh Fire' poor run in the last few weeks.

Ahmad could only muster a match score average of 13.28 with the opposition figuring him out or actually playing him out in the middle overs. The nature of the pitches hasn't helped as well with Qais' price dropping by 15.52% over the week. At 39.70 Sixer Coins per Share, Qais Ahmad provides value for money. With a decent Hundred campaign under his belt, Qais could be one to watch out for in this year's T20 calendar.