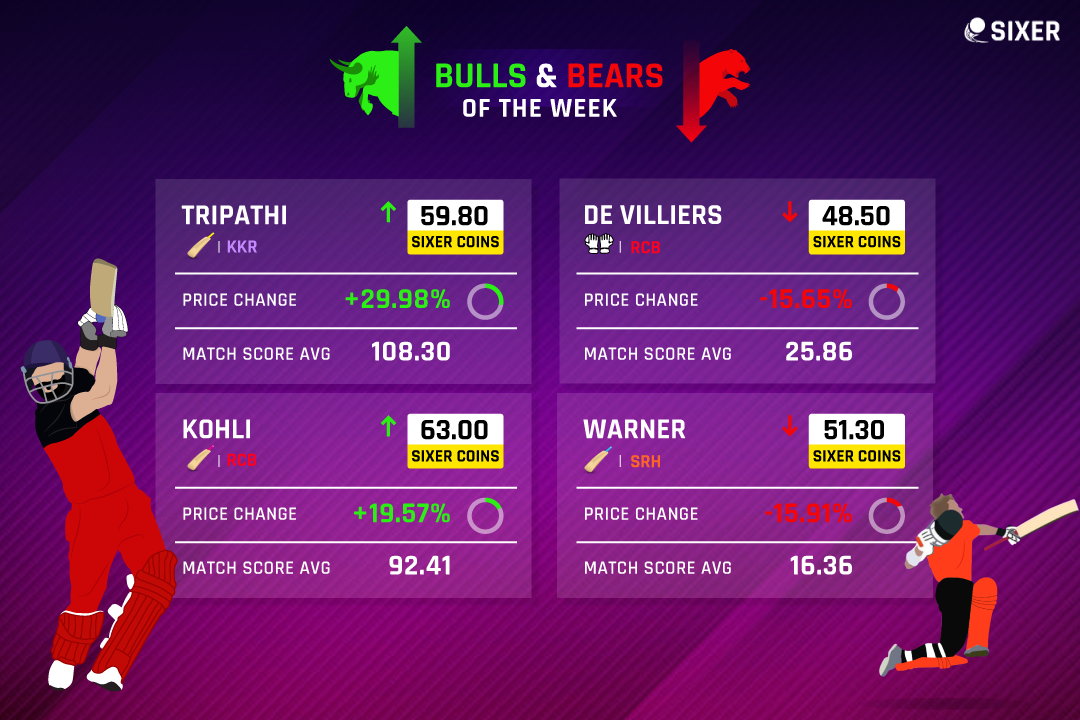 The IPL is back, and so is the frenzy around IPL fantasy stocks in the Sixer Market! Over the course of the week, several players staked a claim at being the Bull of the Sixer Market. However, only a few make the cut as the Bull and unfortunately the Bear of the Market. Without further ado, here are the Bulls and Bears of the Week!

Virat Kohli is undoubtedly one of the best batters on the planet and he just showed us why with a couple of handy knocks against Mumbai Indians and Chennai Super Kings, two of the most feared and successful franchises in IPL history.

Kohli came up with two near-100 match scores with one of them resulting in a win for RCB. As a result, Virat's price zoomed up by 19.5% with a match score average of 92.41 to show for his efforts. However, Virat is just starting with his rich vein of form. With RCB likely to qualify for the final four and with the World Cup also fast approaching, Virat at 63.00 Sixer Coins might not be a bad option by any means!

Synonyms with freakish batting and RCB itself, AB de Villiers hasn't had the best of starts to his UAE leg in IPL 2021. Arguably RCB's best player last season, de Villiers hasn't been able to replicate the same form this time around.

de Villiers' price went down by 15% with a match score average of 25.86 doing his fantasy stock price no good. A major part of it can be attributed to him batting lower down the order as a finisher and the fact that Virat Kohli and Glenn Maxwell's exploits haven't left room or time for AB de Villiers to showcase his capabilities. At 48.50 Sixer Coins per Share, AB is at a 5-Match Low and given the kind of player he is, perhaps it is time to add him up into your Favourites list.

Rahul Tripathi makes the cut as the second Bull of the Week and rightly so. Tripathi has been Kolkata's go-to man in the top-order with a couple of scintillating knocks against the likes of Chennai and Mumbai. Tripathi's fearless approach and the fact that Kolkata has a long line-up of hitters to follow has served him and his fantasy shareholders well.

Tripathi has seen a price increase of 29.98% in his last two games, the highest in the Sixer Market during the week. This was largely to due to his match score average of 108.30, again the highest during the week. With Tripathi facing the Delhi Capitals today, potential fantasy shareholders would ideally be keeping an eye on him. Can Tripathi fire against Rabada and Nortje? Only time will tell!

David Warner was an untouchable as far as the Sunrisers Hyderabad roster was concerned. Not many would have imagined Warner not captaining the side at the start of the season, let alone being dropped altogether. But that's what cricket throws at us mere cricket fans.

Warner didn't have the best of times last week with a match score average of nearly 16, resulting in a price drop of 15%. In fact, Warner hasn't been able to get going at the top of the order like he usually does. This has forced SRH's hand into dropping and replacing him with Jason Roy, who scored a fifty on SRH debut.

However, this isn't the end of David Warner. Like all great cricketers do over the course of their careers, Warner is in the midst of a poor run of form. A bit of time away from the game could help for Warner but being the player he is, Warner could be back among the runs as soon as the ICC T20 World Cup! If you think he can reinstate his credentials as one of the best in the business, the Sixer Market is the place to be in, come the T20 World Cup!