Bulls & Bears of the Week: Zaman Up by 68% as Clarke, Gregory Falter 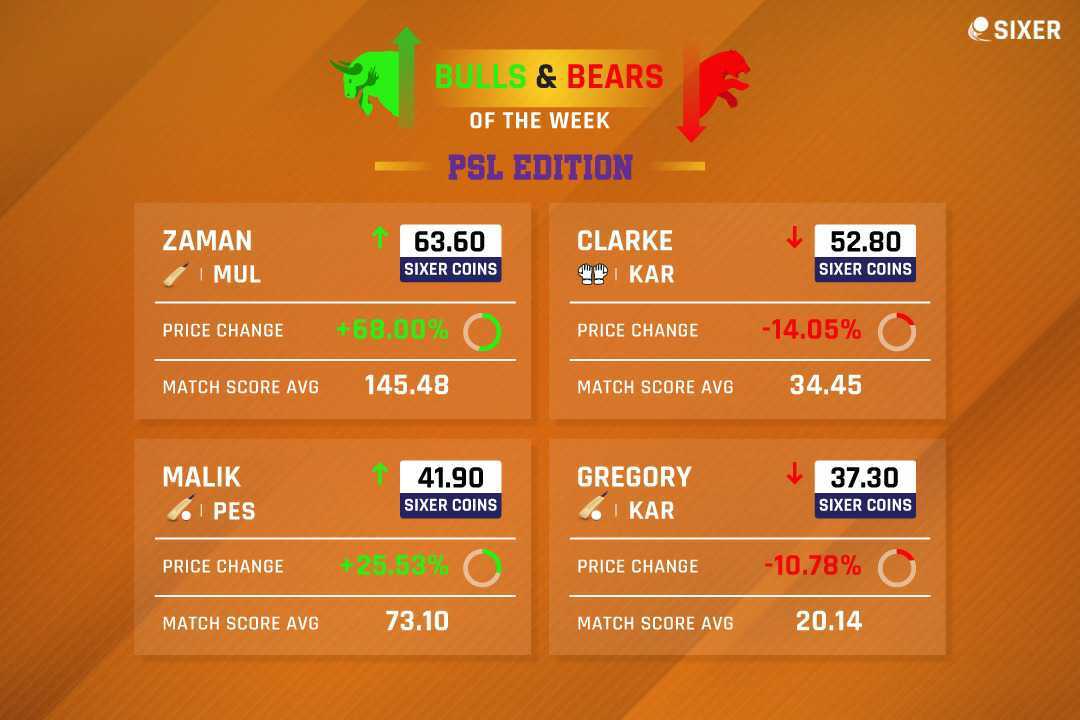 The PSL is up and running with the Multan Sultans continuing from where they ended the previous season - a handful of wins. However, it hasn't been just about the Sultans. A couple of individuals have come up with impactful performances, seeing their fantasy stock valuation rise over the last week or so. For every yin, there is a yang and similarly, there are those who haven't started the season like they would have liked to.

So without further ado, here are your PSL Bulls and Bears of the Week! Here. We. Go!

Fakhar Zaman has been the standout player in the PSL so far and for good reason. In his first two games for the Qalandars this season, Zaman has accumulated 182 runs at a brilliant strike rate of 191.58. He averaged a match score of nearly 146, resulting in a massive increase of 68% in the Sixer Market! With over two-thirds of the tournament still to come, Zaman is one to watch out for in the Market!

While the Qalandars and Sultans have impressed in PSL 2022, it has been a woeful start for the Karachi Kings, who have lost all of their three games so far. Their lead pace-bowling all-rounder hasn't fired with bat and ball with his match score average reading 20.14. His price has dropped by 10.78% in the last week or so, which might be a good option for fantasy shareholders on the lookout for viable fantasy stocks. With his experience bound to serve him well, Gregory could be in high demand over the next few weeks.

Over to the Bulls, Shoaib Malik is still going strong for the Peshawar Zalmi with his price increasing up a massive 25.53%. The veteran allrounder was able to score handy runs in both Zalmi matches, resulting in a match score average of 73.10. Although Malik has been batting at number four, Haider's poor form and the impending arrival of Liam Livingstone could see him play a more prominent role, perhaps at number three. But for now, Malik seems to be doing just fine, both on the field and in the Sixer Market!

Last but not least is Joe Clarke, who is the second Kings import to make the cut as a Bull this week. Clarke, who came into the PSL on the back of a stunning BBL season, couldn't get going in any of his three games so far. He could only average a match score of 34.45 with a strike-rate well below the 130 mark. As a result, his price has dropped to 52.80 Sixer Coins, a 14.05% drop-off since the PSL. However, Clarke has the skill to excel against both pace and spin and given the batting-friendly conditions in Karachi, Clarke could be in for a big couple of weeks in the PSL!