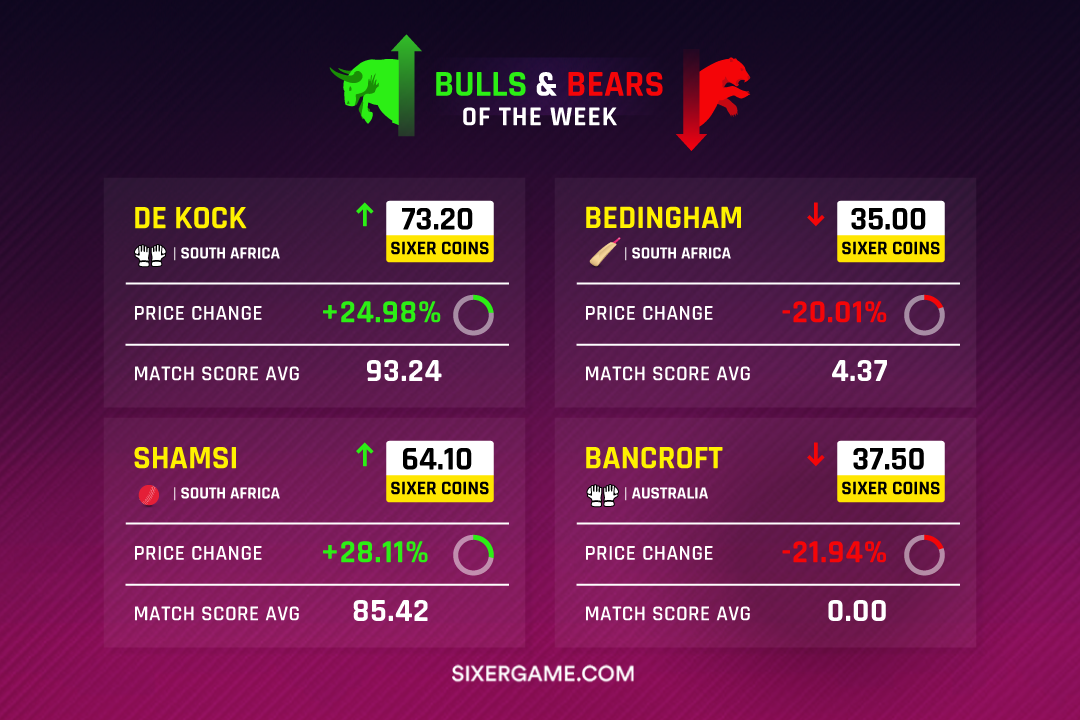 What a week it was in the Sixer Market! Countless T20 games taking place all over the world opened up numerous opportunities for Sixer fantasy shareholders to build their portfolios in the right direction.

T20 stars such as Chris Gayle and Ben Stokes featured during the week, but only a few make the cut in this week's Bulls and Bears! Without any further delay, here are your Bulls and Bears of the Week to kickstart your day in the Sixer Market!

Who else but de Kock! The South African had a brilliant tour of the West Indies and was at his supreme best against West Indies in the T20I series. De Kock scored 255 runs at a strike-rate of 141 with a match score average of 93.24.

The southpaw consistently delivered at the top of the order despite the shortcomings of Temba Bavuma in the middle overs. His knock in the last two games was crucial to his stock price, which has risen by 24.98% this series.

de Kock is among the highest valued fantasy stocks, and rightly so. His form and skill make him one of the best in the business, and with a series against Ireland on the horizon, de Kock could be quite popular in the coming weeks.

While one wicketkeeper had a great time in West Indies, another had a torrid time in the T20 Blast! David Bedingham, who hit the headlines in the County Championship earlier in the year as a Bull, makes the cut this week as a Bear.

Despite being promoted to the top of the order, David Bedingham couldn't get going in both these games during the week. He could only muster a match score average of 4.37, leading to a 20% decrease in fantasy stock price. Bedingham struggled against the new ball, which could well be a chink in his armour.

Despite the decline, Bedingham's fantasy shareholders should be happy with the resumption of the County Championship. He is the highest run-scorer this year, at the time of writing, and if he were to get close to the form he showed in April and May, his fantasy shareholders are in for an exciting time.

Back to the South African National side, if Quinton de Kock led the way with the bat, Shamsi was the man with the ball. In fact, he even managed to outshine de Kock in the series with the man of the series award to his name.

Shamsi starred in each and every game against the Windies with a match score average of 85.42. His price increase of 28.11 saw his price jump to an all-time high of 64.10 Sixer Coins per Share!

Ranked number one in the T20I format, Shamsi is slowly becoming South Africa's go-to bowler in the format. The Chinaman has struck a chord with consistency, which holds him in high regard. If he were to continue this form, Shamsi could see himself make the cut as a Bull more often.

Last but not least is Cameron Bancroft, who makes the cut as the second Bear this week. Durham wasn't in their elements during the week, and to some degree, Cameron Bancroft was responsible for it.

Playing in the middle-order, Bancroft managed two-match scores of zero, resulting in a 21.94% decrease in fantasy price. His price now reads a 28-match low of 37.50 Sixer Coins, although not everything is dull at the moment.

Bancroft, like Bedingham, will relish a return to the County Championship as Durham face Warwickshire this week. His rock-solid technique should serve him well, as fantasy shareholders will look to nab him up as the game progresses. But can he make amends for his no-show in the T20 Blast? Only time will tell!