Bulls of the Market: Azam Continues Fine Form as Zampa, Boult Hold their Own With the Ball! 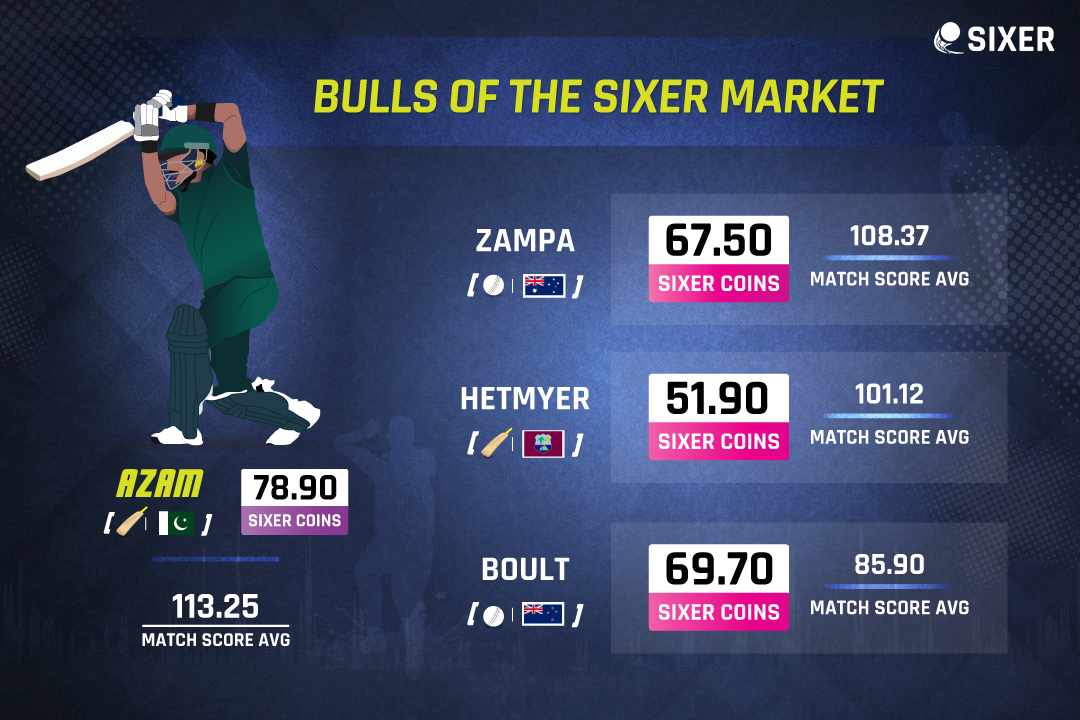 The Super 12 phase of the Men's T20 World Cup 2021 has concluded with Pakistan, England, Australia and New Zealand in the mix to go the distance. With only a handful of matches left to be played, the competition for fantasy stocks is at an all-time high. So to get you underway for the week ahead, here are the Bulls of the Sixer Market over the last week or so!

Babar Azam is undoubtedly the player of the week, with the Pakistan captain scoring three fifties on the trot. He averaged a match score of 113.25 during the week, with his fifty against Scotland being the pick of the lot. His ability to set himself up for a big score and then make one makes him truly special as he currently tops the runscorers charts with 264 runs in five matches.

While Azam has already seen a price increase of nearly 20% in this T20 World Cup, the Pakistan captain will be looking to sustain his form against Australia, against whom Pakistan will play in the second semi-final. With his price trading near his all-time high, Azam is undoubtedly one to watch out for in the knockout phase!

Although West Indies couldn't defend their crown this time around, Shimron Hetmyer had a memorable week on a personal note. The southpaw scored an impressive fifty against Sri Lanka albeit in a losing cause. But his fantasy shareholders didn't lose much at all.

Hetmyer saw a price increase of around 25% courtesy of a match score average of 101.12. He was able to take on both the spinners and pacers in the middle overs, a role he is now accustomed to after fruitful stints with the Delhi Capitals. Trading at 51.90 Sixer Coins, Shimron Hetmyer is due to play in quite a few franchise leagues and for the national side as well. And if he can keep up this form, the sky is the limit for Hettie!

Moving on to the bowlers, there were two bowlers who picked 11 wickets in the Super 12 phase - Trent Boult and Adam Zampa. No pacer could pick more wickets or average a better match score than Trent Boult, who picked at least two wickets in all his games during the past week or so.

His match score average of 85.90 was the best among the Kiwi lot, even winning him a man-of-the-match award against Afghanistan in what was a virtual quarterfinal. Apart from his obvious talent with the new ball, Boult has improved his death-bowling skills as well, serving New Zealand well. But can he continue his form and lead the Kiwis to yet another ICC Final?

On to the other highest wicket-taker in the Super 12 phase, Adam Zampa was Australia's go-to bowler in the middle overs. His fifer against Bangladesh earned him a perfect match score of 150, the only such instance for a bowler in this T20 World Cup. His loopy leg-breaks have served Australia well, who haven't been convincing in this tournament with the ball.

However, Zampa's fortunes have ensured Australia another semi-final berth. But against a strong and unbeaten Pakistan outfit, they will need their premier spinner to come up with the goods. Against some of the best players of spin in Azam and Zaman, Zampa is surely one to keep tabs on in the Sixer Market!