Can New Zealand Get Past the Duo of Mustafizur and Shakib? 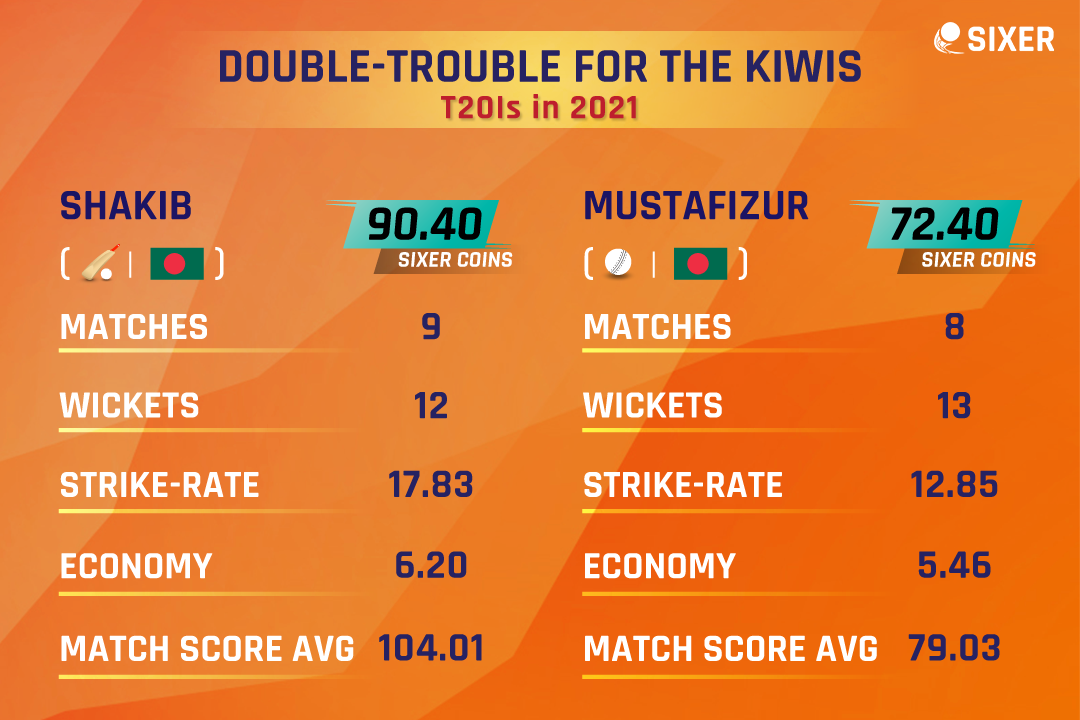 Bangladesh, in their own backyard, have been sensational! After thumping Australia by a big margin, they were back at it as they beat New Zealand by seven wickets in the first T20I! However, that barely tells the whole story.

New Zealand was completely outplayed by the Bangladesh bowlers, who bundled them out for a paltry score of 60! The likes of Tom Latham and Tom Blundell failed to get going as the spinners wreaked havoc at the Shere Bangla National Stadium!

Now the Kiwis are a tough nut to crack. Although they have brought a second-string side to the subcontinent, New Zealand have enough talent in their roster to flip the script in the space of just two days. But they are in for another spin-fest with Bangladesh heading into this game as the clear favourites.

Key to Bangladesh's fortunes in 2021 have been Shakib Al Hasan and Mustafizur Rahman. The duo has come up trumps with the ball in almost every game with Shakib even currently topping the Sixer Market w.r.t price! To get a better idea of how both of them have gone about their work in the T20I format in 2021, here's your dose of Sixer Insight!

Mustafizur Rahman had lost some of the zip in 2019-20, something he was famous for in the early stages of his career. People were beginning to line him up and Mustafizur's effectiveness was being questioned. However, the left-armer has bounced back in emphatic fashion to silence his critics.

Fiz has been the star pacer for Bangladesh with 13 wickets in eight games at an economy of just 5.46. He bowls predominantly in the death overs, which makes his economy all the more better. With a match score average of 79.03, Fiz has already handed his fantasy shareholders a nice profit. His cutters are beginning to grip and yorkers are getting the best of some of the world's best, something you wouldn't want to miss out on in the Sixer Market!

Speaking of someone you wouldn't want to miss out on, Shakib Al Hasan has been on a roll in the T20I format. He has been churning out 100+ match scores for fun with a match score average of 104.01 in nine games in 2021! He has picked up 12 wickets in the process with a strike-rate of 17.83 to show for his efforts.

He has been their go-to bowler in the middle overs although his batting is what has propelled his fantasy share price to 90.20 Sixer Coins, the highest valued stock in the Sixer Market! He even put in a man-of-the-match performance in the first T20I, which makes him all the more dangerous ahead of this game!

With both Fiz and Shakib firing on all cylinders, the Kiwis haven't got much room for error. The only glaring opportunity they have is in the powerplay overs, where both Mustafizur and Shakib haven't been used too often. With Finn Allen likely to slot back into the playing 11, the powerplay phase could be crucial in the context of this game.

Nevertheless, cracking day beckons with New Zealand-Bangladesh and of course India-England also competing at the Kia Oval. With the likes of Shakib Al Hasan and Virat Kohli in decent form, surely you would have one eye on the upcoming IPL as well!