Can Renegades' Young Brigade Finally Deliver in the BBL? 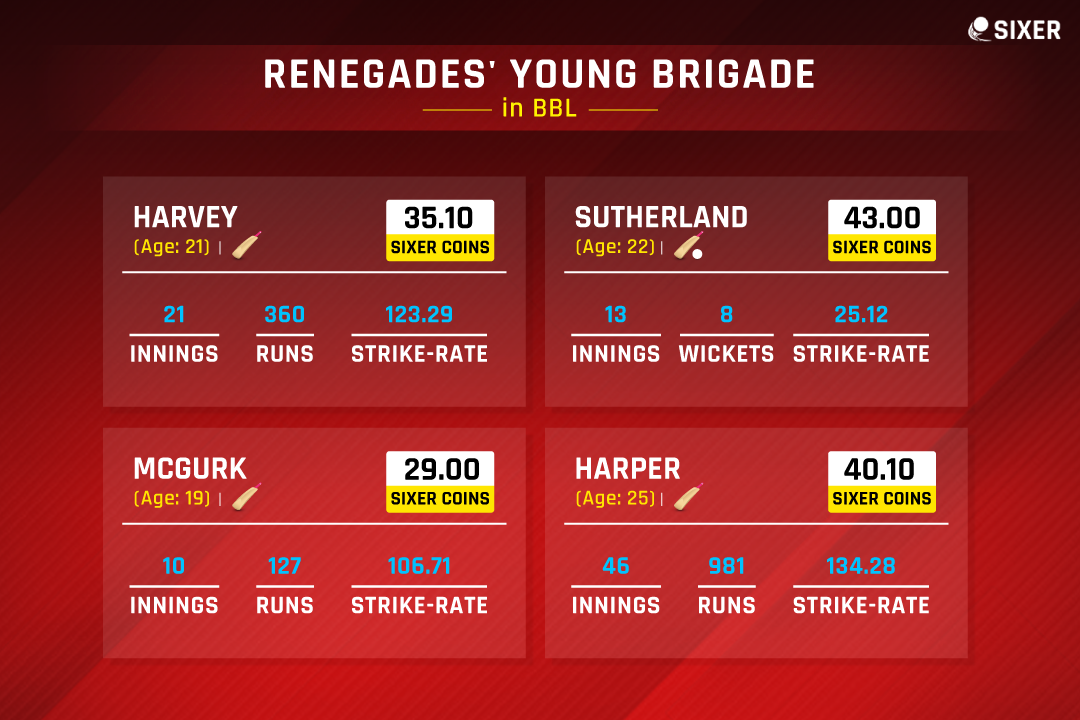 The BBL action is taking over the Sixer Market with fantasy player stocks getting sold out in the blink of an eye. While the first two matches have provided ample opportunities and entertainment, the action now moves over to the Docklands Stadium where the Melbourne Renegades take on the Adelaide Strikers. The Strikers boasts of a supremely talented bowling attack featuring Rashid Khan, Peter Siddle and Wes Agar. They will be keen to get the better of the Renegades.

The Renegades are at the crossroads ahead of this tournament. After their sensational BBL win in 2018-19, the Renegades have finished at the bottom of the table in the following seasons. Despite Shaun Marsh being signed by the Renegades, they haven't really lived up to expectations. This has forced them to undertake a bigger project, one that envisions the best youngsters in Victorian cricket leading the charge for the Renegades in the BBL.

Over the last few seasons, Victoria has dominated the domestic circuit and have been unearthing new stars consistently, some of them who have already made an impact in the BBL too. The Renegades have also flirted with the idea of embracing their young brigade but have often been caught with no real intentions at the crossroads. They find themselves in a similar position but this time, the scenario and the setting is not the same as 2019-20 or 2020-21!

A couple of promising youngsters have already donned the red of the Renegades at the Docklands Stadium in the BBL. But they haven't been given a sustained run in the playing 11, something that could change this season. With a heap of youngsters itching to make an impact and breakout in the BBL, here are four such players who could be in for a big season with the Melbourne Renegades.

Mackenzie Harvey was part of the 2018-19 Melbourne Renegades squad that went all the way. In fact, he even played in the final, scoring 14 off 16 balls. With a promising start to his BBL career, Harvey was earmarked by many to have a breakout season in the following year but that didn't come to fruition.

However, Harvey has been doing well in the domestic competitions, racking up runs like a veteran. The southpaw is leg-side dominant although his off-side play has also improved over the last few months. In addition, Harvey is a gun fielder with Aaron Finch even calling him one of the best fielders in the world - a big compliment from a guy who has played with Glenn Maxwell, AB de Villiers, Kieron Pollard to name a few.

With Shaun Marsh not likely to play before Christmas, Harvey will get a longer run, perhaps in the top-order. With the hunger to succeed in the BBL, all eyes will be on Harvey when he takes to the field this season.

Another member of the 2018-19 Renegades side, Sam Harper was a revelation back then. Likened to Steve Smith owing to his unorthodox style of batting, Harper has been one of the Renegades' best batters in the last few seasons. The wicketkeeper batter relies on innovation and timing to get his runs, an art that has wowed many.

Despite all the promise he has shown in the last few seasons, Harper will be expected to take up a more prominent role this season. With the experience of a couple of BBL seasons under his belt, Harper will want to add consistency to his game, something that has been missing throughout his career. But can he take the big jump and etch his name alongside Josh Inglis and Josh Philippe as the best wicketkeeper batters in Australia? Only time will tell!

On to the bowling department, we have Will Sutherland, who is regarded by many as the best young prospect in Victorian cricket. He has been a mainstay in Victoria's set-up for a few years now but hasn't translated his form into the Big Bash.

Sutherland is a skilful bowler who can make good use of the new ball and nail the yorkers in the death overs as well. He has a good frame, which enables him to extract any extra bounce on offer. In addition, Sutherland is a decent option with the bat too, making him the perfect addition to any team or portfolio for that matter.

Sutherland has been given a few chances in the past but poor performances have led to him being dropped. But this time around, Sutherland's form leading up to the BBL season should give him the nod over Jack Prestwidge, who is a promising young all-rounder himself. Priced at 43.00 Sixer Coins per Share, Sutherland's fantasy shares are in demand and given his skill-set, you may have to act fast to get the best out of him.

Last but not least, we have Jake Fraser-McGurk, who is earmarked by many as Australia's answer to MS Dhoni in terms of a finisher. A big claim, yes but for those who have seen JFMG bat, you would be excited too.

The young right-hand batter can bat anywhere in the top-six, like MS Dhoni. He has an unorthodox technique and relies on his hand-eye coordination and fast hands to do his bidding, like MS Dhoni. Also, he has a knack for coming up clutch, as seen in the U-19 World Cup a few years ago where he scored 118 runs in four matches.

He had a decent run with the Renegades last season despite not being able to score freely as he usually does. It would be interesting to see as to how the Renegades use Fraser-McGurk but the fact remains that he is one of the brightest prospects in Australian cricket. And to get his fantasy stocks for a mere 29.00 Sixer Coins at the start of the season is just the icing on the cake.