Can Salt and Banton Get Back Into the Gains in the T20 Blast? 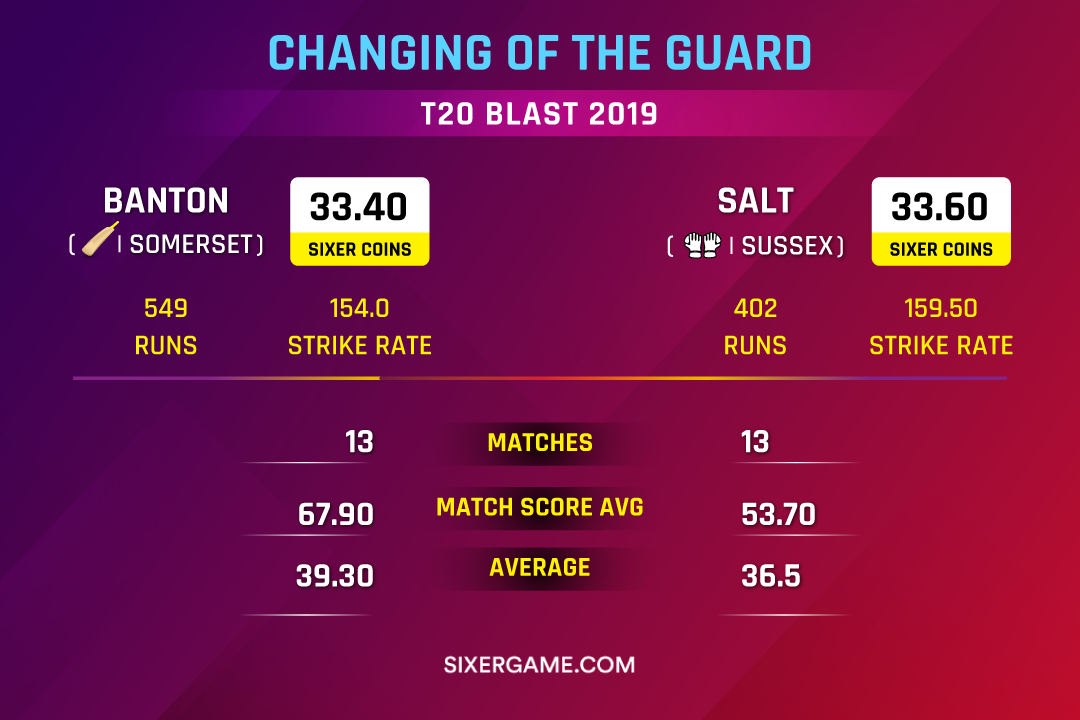 The long-awaited T20 Blast is back with action kickstarting from Wednesday. The first few rounds of fixtures feature global superstars Ben Stokes and Jos Buttler turning out for the respective county sides (Durham and Lancashire).

The T20 Blast will also be home to several overseas stars looking to add to their case of an inclusion in their respective country's T20 World Cup squads. From youngsters such as Finn Allen to proven T20 superstars Lockie Ferguson and Glenn Phillips, the T20 Blast is filled with talent and opportunities.

Like overseas stars, English domestic stars will also be vying for a spot in the English T20 Squad in the build-up to the World Cup later this year. Two such individuals who were earmarked for a breakout season this time around were Sussex's Phil Salt and Somerset's Tom Banton!

Both of them are supremely talented, with their records speaking for themselves. However, their recent dip in form has seen their stock price take a tumble in the Market. Ahead of the T20 Blast openers, a deeper insight into what the duo can do is in order. Here's your latest dose of Sixer Insight ahead of the all-important T20 Blast 2021!

Can Fit-Again Salt Replicate his 2019 Numbers for Under-Fire Sussex?

Phil Salt wasn't available for Sussex in the County Championship due to a freak accident. While Sussex had to hand debuts to youngsters Orr and Ibrahim, they sorely missed Phil Salt at the top of the order.

However, Salt is expected to feature for the Sharks in the T20 Blast, recovering from a foot fracture. His addition adds a different dimension to the Sussex batting unit. Although his recent form in the BBL and the PSL wasn't great, the T20 Blast is a beast that Salt has already tamed in the past.

Salt was one of the top openers in the 2019 edition, with 402 runs in 13 games. What stands out is the consistency and the rate at which he brought up those runs (Average 36.5 and strike rate nearly 160). He managed a match score average of 53.70, the highest among Sussex players after David Wiese.

Salt is particularly tough on the pacers, with his gameplay against spinners also improving off late. If he is able to replicate his 2019 numbers, indeed, Sussex will harbour hopes of a trophy this season. But for Salt, a late call-up to the T20 squad would be all.

Can Banton Overcome his County Woes in his Preferred Format?

As previously discussed, Tom Banton is also another exciting young talent who is definitely in England's long-term plans in white-ball cricket. However, his inability to translate his white-ball form into the red-ball format has come back to haunt him.

Banton's price has dropped to an all-time low of 33.40 Sixer Coins per Share, courtesy of some lacklustre performances for Somerset. Having started the season as the first-choice opener, Banton was dropped after a few rounds of poor form.

Although he did return back as a lower-order batsman a fortnight ago, Banton's hopes of an England call-up have clearly taken a hit. But like Salt, he is a proven performer in the T20 Blast. In his only full season for Somerset in the Blast, Banton starred alongside Babar Azam at the top of the order.

Banton ranked among the best openers with 549 runs and a strike rate I'm excess of 150. He also had a century to his show for his efforts, which attracted many suitors from other franchise leagues. It was this kind of form that caught the eye of fans, who immediately likened Banton to Kevin Pietersen.

While Banton's recent form isn't the best metric to go by due to his struggles in the longest format, he is more than a viable option in the shortest format. With the former KKR opener bound to return to his preferred opening slot for Somerset, it may only be a matter of a few crisp flicks or drives before he regains his mojo and launches a bid for an England call-up!