Can Wasim and Hasan Find Form in Shadab's Absence in PSL 2022? 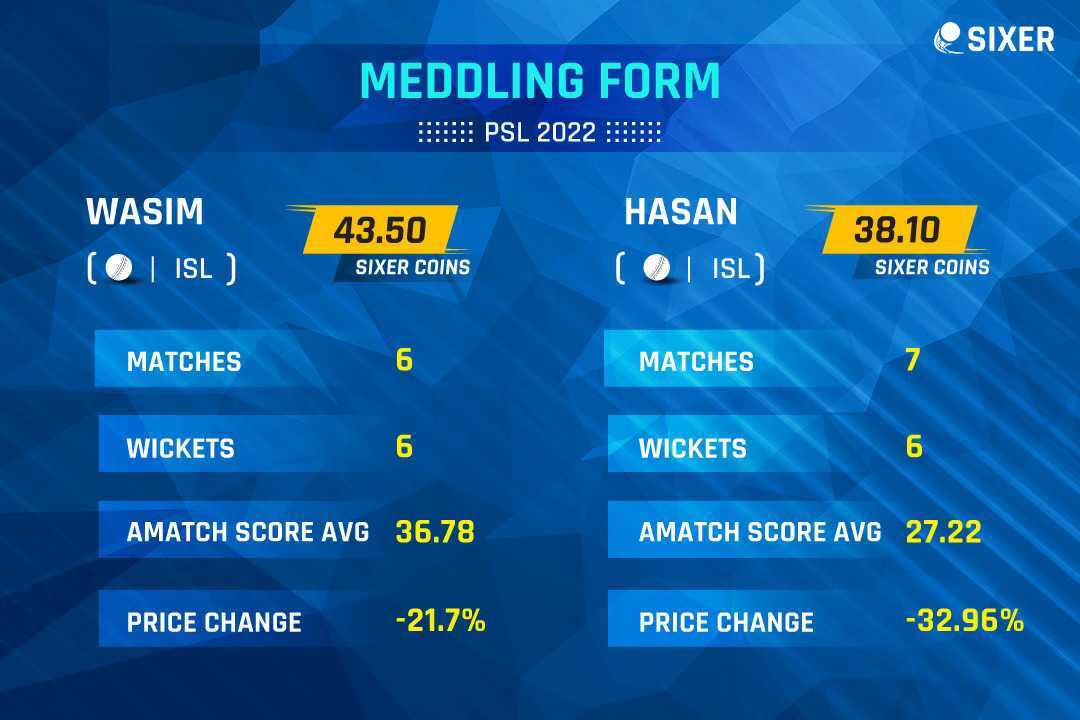 The PSL league phase has already served up its fair share of entertainment. With only a handful of matches left and possibly two places up for grabs in the playoffs, it is do-or-die time for a few teams, including Peshawar Zalmi and Islamabad United, who are set to face off at the Gaddafi Stadium today.

While Peshawar Zalmi has been brilliant in the last few games with Liam Livingstone's arrival revitalizing their fortunes, Islamabad is in some trouble in terms of personnel. Shadab Khan, the unanimous MVP of PSL 2022 so far, isn't available for this game and so isn't Zeeshan Zameer. And with Alex Hales also leaving the bubble due to fatigue, Islamabad is short of options.

But again, Islamabad United have a strong roster to fall back on with their existing options being brilliant on paper. But it has been on the field that some of them have underwhelmed. The onus will be on Hasan Ali and Mohammad Wasim to deliver the goods in the absence of Shadab Khan. But their form is a concern. To get a better understanding of their form and Islamabad's bowling concerns, here's some much-needed insight to get yourself going in the Sixer Market!

High time for a return to form for Hasan and Wasim?

Hasan Ali and Mohammad Wasim were part of Pakistan's T20 World Cup 2021 squad and are likely to make the cut for the next one later this year too. However, their PSL form this season has left a lot of room for improvement.

First up is Mohammad Wasim, the young bowling allrounder, who relies on variations and back-of-a-length deliveries to do his bidding. But this season, Wasim has only picked 6 wickets in 6 games with a match score average of 36.78. As a result, his price has decreased by 21.7%.

As for Hasan Ali, it's even worse. The premier pacer is down by nearly 33% in the Sixer Market with only six wickets to show for his efforts across seven games. His match score average reads a paltry 27.22 and has failed to hold his own in the death overs.

While both Hasan and Wasim were impressing in their first seasons with Islamabad last year, they relied on a very specific plan and strategy. Hasan was asked to destroy oppositions with the new ball while Wasim was the enforcer in the middle. But this time around, Hasan and Wasim have been used across different phases, which has impacted their performances.

Part of this can be attributed to Shadab Khan's success in the middle-overs. The Islamabad captain has brought himself on every time he needed a wicket and did it with aplomb. You don't pick 17 wickets in 6 games without any talent. But with Shadab out injured, the onus now falls on Hasan and Wasim, who could be recalled back into the side for Zeeshan Zameer, who injured himself in the previous game.

While Faheem Ashraf is expected to continue with the new ball, Hasan's overs in the powerplay will be crucial against the likes of Haris and Zazai. But it is in the middle-overs where Islamabad need to deliver and make up for Shadab. Wasim, along with his variations, could be an answer unless Islamabad looks elsewhere.

But on paper, this is the perfect opportunity for both Hasan and Wasim to deliver the goods. With a place in the final four on offer, Islamabad will be desperate to have their big guns back in form. But can they deliver against Peshawar Zalmi today? Only time will tell.