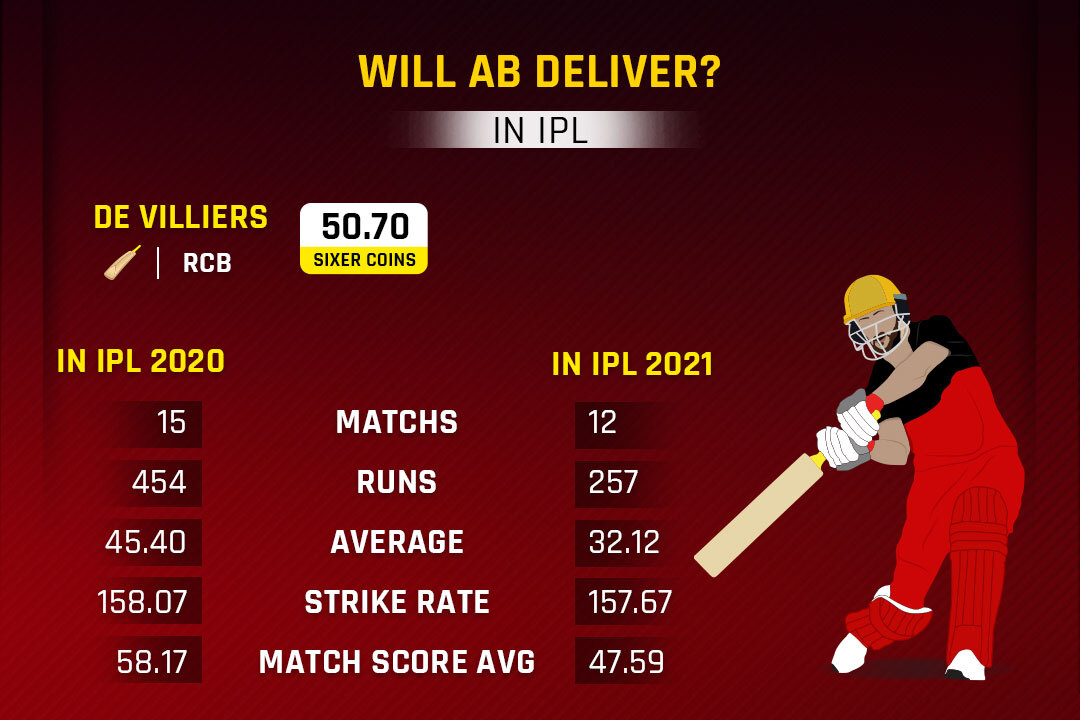 Alas, Royal Challengers Bangalore supporters! Throw away your calculators as, for once, you wouldn't need them in the fag end of the tournament. On the back of three consecutive wins, RCB has already confirmed its place in the knockout phase, although they do have a chance at sealing a top-two finish as well.

Unlike yesteryears, RCB has a nice balance and can rely on their bowling and not just AB de Villiers to get them out of tricky situations. Speaking of AB, he has taken upon a new role in the RCB batting unit, that of a finisher.

Like Maxwell, AB has been used as a floater, although he hasn't achieved the same level of success. In fact, AB de Villiers has seen a price drop of nearly 20% in the UAE leg so far, something that not many would have foreseen. To get a better understanding of how AB's season has gone by, here's some much-needed insight to get yourself going in the Sixer Market!

A Big One Around the Corner for AB?

To fully get the hang of AB de Villiers' perceived decline in IPL 2021, one needs to understand his IPL 2020 exploits and role in general. Just to make things clear, AB de Villiers is a once-in-a-lifetime sort of player who excels against pace, not so much against spinners but is effective.

AB de Villiers was mostly used in a top-order role by RCB in the last few years, taking on both the pacers and spinners at the time of need. However, this wasn't a foolproof idea as AB de Villiers' relative struggles against spin was being exploited by oppositions.

AB de Villiers has been accounted for multiple times by the likes of Shreyas Gopal and Krunal Pandya in recent years. However, this hasn't really dented his match-winning ability with the South African scoring 454 runs at an average of 45.40 and a match score average of 58.17.

With Glenn Maxwell, who is one of the Bulls of the Week at the time of writing, in terrific form, AB hasn't been required to do much with the bat. But when called upon to do so, AB has rarely disappointed.

Who can forget his stunning knocks against Mumbai and Kolkata early in the tournament? Or even his blitzkrieg against Delhi Capitals, which earned him a 50+ match score. But this can't hide the fact that AB is due for a big knock in the UAE this season. Given how he went about things last year at the same venues, you wouldn't want to write him off just yet.