It's here! The Hundred is set to kickstart a new era in world cricket. A brainchild of the English Cricket Board, the Hundred has some exciting changes such as 5-ball overs and bowlers bowling two overs in succession, adding another layer of intrigue to the game we love so much!

However, like the T20 format in its nascent stage, there were a few players who were earmarked to make a significant impact in the format. Trailblazers such as Brendon McCullum and Chris Gayle were some of those to be highlighted once the format was announced. Walking along the same lines, here are four players who could have a profound effect on the inaugural edition of the Hundred!

When you think of the shorter formats, you think of openers giving their teams fast starts at the top of the order. With the Hundred being a shorter version of the T20 format, a player of Tom Banton's calibre and talents should take to the format like a fish to water.

A lanky wicket-keeper batsman who has all the shots in the book, Banton is earmarked by many for international success. Likened to Kevin Pietersen due to a very similar trigger movement, Banton has turned a few heads in world cricket, earning multiple franchise league contracts in the process.

Leading up to the Hundred, Banton had a fruitful T20 Blast campaign, in which he scored over 300 runs at a match score average of 55.84. His stock price saw a rampant increase of 74%, which should throw light on his recent form. If he were to replicate the same for the Welsh Fire in the Hundred, his fantasy shareholders are in for another profitable period in the Sixer Market!

If you are an avid cricket fan, surely you have come across the brilliance of Liam Livingstone. The Lancs all-rounder smashed the cricket ball to all parts as he led England to a series win over Pakistan. However, the all-rounder is merely translating his domestic form and potential to the international scene.

Liam Livingstone is one of the hardest hitters of the cricket ball and has played in almost every franchise league in the world. Apart from being a swashbuckling opener, Livingstone can also hold his own with the ball, bowling off-spin to left-handers and leg-spin to right-handers.

His recent form is as good as any in world cricket. Not too long ago, Livingstone smashed the fastest T20I hundred for an Englishman at Trent Bridge and followed it up with brisk knocks against Pakistan. His T20 Blast match score average of 108.37 is top-notch with his price increasing by 15% in the last few games. His resourcefulness suiting the format and the fact that he is available for the entirety of the tournament makes him a viable prospect in this format.

Who else but Sam Curran? Arguably one of the best young talents of this generation, Sam Curran is slowly coming into his own in all formats. Having first made his name in the Test series against India in 2018, Curran has come a long way since then.

He is now a crucial part of England's set-up across all formats and is one of the most sought-after players in franchise league cricket. A genuine fast bowling all-rounder is a rare breed, but a left-arm quick who can whack the ball a mile in Curran will always hog the limelight for his talent and skill-set.

Capable of swinging the new ball and holding his own in the death, Curran's bowling ability is slowly catching up with his batting prowess, which has already vowed fans all over the world. In three T20 Blast matches this year, Curran starred with a match score average of 108.37, showing his ability in the shorter format. Priced at 70.20 Sixer Coins per Share, Sam Curran is one of the most valuable stocks in the Market. With a busy summer ahead for the allrounder, Curran could well be on his way to the top of the mountain or, in short - the Bull of the Sixer Market!

In order to top the Sixer Market, Sam Curran will have to overcome the Manchester Originals, who are the early favourites to win it all in the Hundred. One of the major reasons is their bowling attack, which features a forgotten entity - Steven Finn!

The tall and lanky pacer who starred for England in the first half of the previous decade has fallen out of favour with the national selectors. Once infamous for frequently knocking the stumps in his follow-through, Finn has improved his white-ball skills over the last few years.

This year in the T20 Blast, Finn picked 19 wickets in 13 games, although his match score average reads a paltry 41.51. His new-ball bowling skills have ruled the roost for Middlesex, a skill that could well be used in the Hundred as well. His knack for wickets is well-known, and given his international experience, Finn is definitely a force to reckon with in this new format! 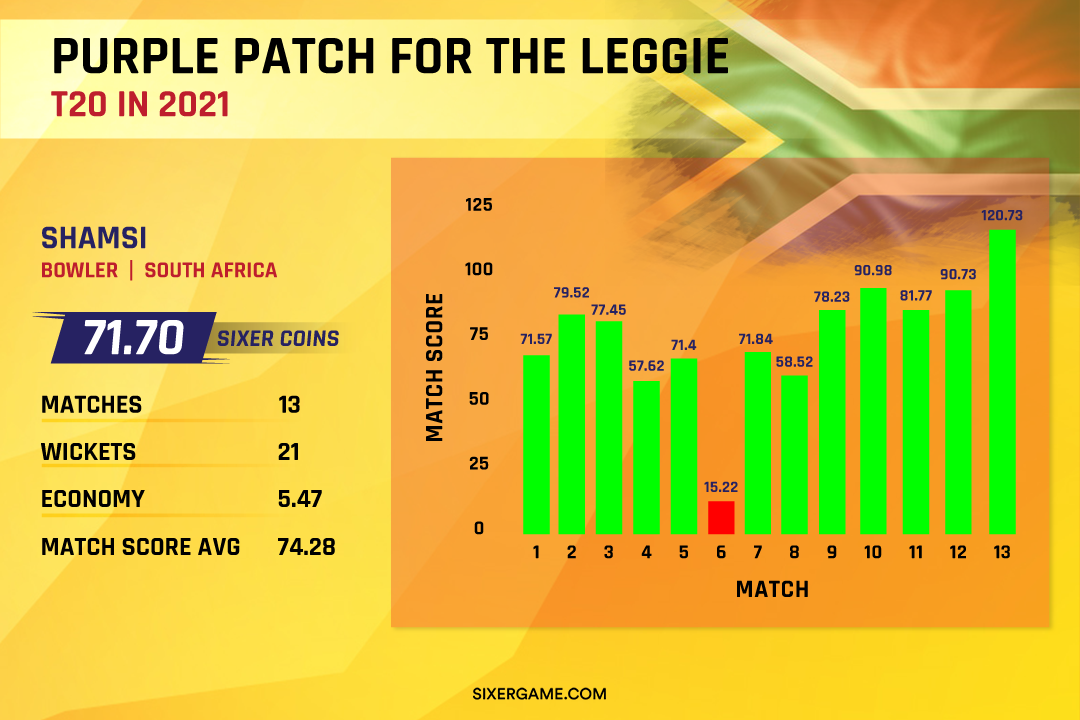 Is Shamsi RSA's Ace in the Hold For the T20 World Cup?

Tabraiz Shamsi has seen a stunning patch of form over the last few months, helping him to the top of the ICC T20 bowler rankings! Here's an insight to why and how Shamsi has been South Africa's best b...