Have Phillips and Ferguson Done Enough In the T20 Blast To Seal A Place in the Kiwi Side? 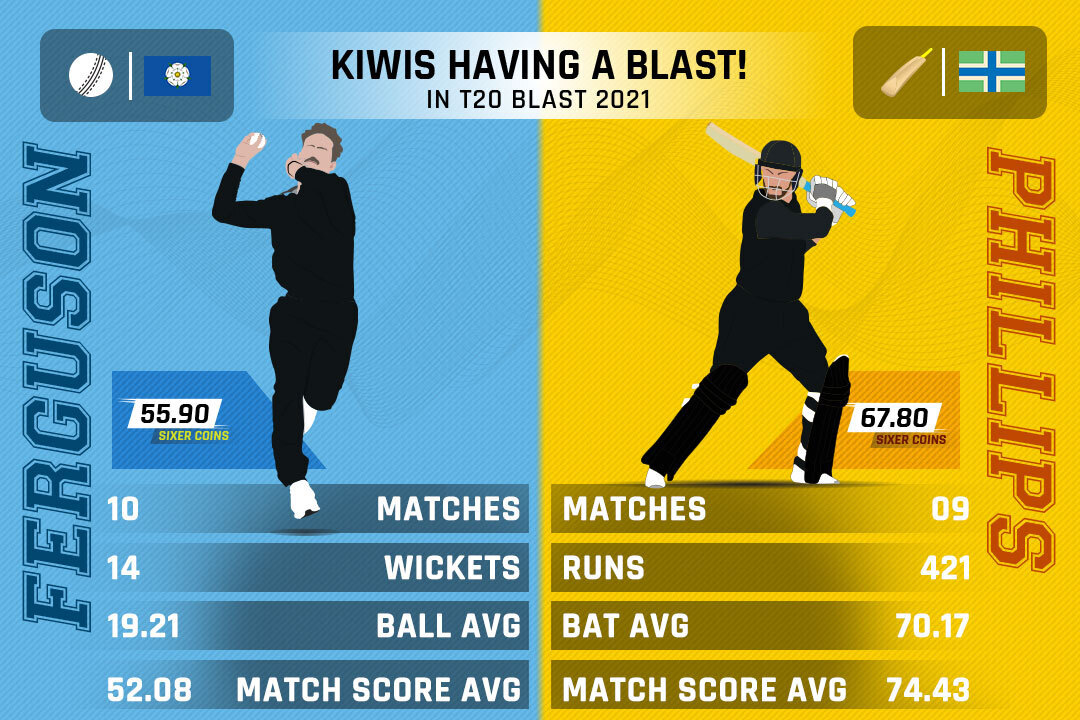 The New Zealand cricket fraternity is on a high after a World Test Championship Final win over India not too long ago. Led by Kane Williamson, New Zealand has transformed into a mighty force across all formats and will be eyeing glory in the white-ball formats as well.

Crucial to their white-ball plans is their attacking approach, instilled into them by former captain Brendon McCullum. Carrying on his legacy, New Zealand has built a decent roster with sufficient depth and balance to threaten any team on any given day.

However, the T20 World Cup, set to be held in the UAE, might just be New Zealand's best chance of an ICC trophy in the white-ball formats. While they boast of world-beaters in Trent Boult and Kane Williamson, there were a couple of spots up for grabs, mainly in the middle order and in the death bowling phase.

Up came Glenn Phillips and Lockie Ferguson, both of whom are currently New Zealand's first-choice players. However, with a lack of matches due to the pandemic, their places in the side were still in doubt but not anymore, some may say.

After stellar T20 Blast campaigns, Ferguson and Phillips have grown in stature and have seemingly done their bit to seal a spot in the side. However, a deeper insight into their performances is to fully understand their importance on the side. Without further ado, here's your daily dose of Sixer Insight!

Are Ferguson and Phillips New Zealand's Trump Cards in the World Cup?

Now to understand what Ferguson and Phillips bring to the table, one needs to understand the basic necessities that they are required to fill in as a death bowler and middle-order batsman, respectively.

A death bowler in this format requires immense control of line and length, subtle variations and an eye for a yorker. Lockie Ferguson fits into this mould like no other. Capable of breaching the 150-kmph mark in speed and toning it down with clever change-ups, Ferguson is one of the most accomplished bowlers in this format.

His T20 Blast stint has only improved his standing as one of the best in the business. In ten games for Yorkshire, he picked 14 wickets at an average of 19.21, including a hat-trick in the previous round. His searing pace and ability to set batsmen up is a vital asset that Kane Williamson has used to perfection in the ODI format. His match score average of 52.08 is decent, especially with the tearaway pacer playing most of his game at the high-scoring Headingley.

As for Glenn Phillips, he has been the standout player in this T20 Blast. Playing for a resourceful Gloucestershire side, Phillips has starred in the middle overs with his intent-driven batting approach. His strike-rate reads in excess of 140, with his tally of 421 runs being second to only Harry Brook's 463.

His batting average of 70.17 and match score average of 74.43 is among the highest for middle-order batsmen, a slot that requires a great deal of flexibility in this format. In addition, Phillips is quite handy with the ball, with his off-spin possibly being an extra option for Kane Williamson going forward.

All in all, both Ferguson and Phillips have done no harm to their stock price with impactful performances. They provide the X-factor in the middle-overs, something that New Zealand lacked in this format in the last few years. However, with both Auckland Aces stars expected to play a major role in the Kiwi T20I side, fantasy shareholders might want to keep a close eye on how their prices move around in the lead-up.