High Time for Gaikwad and Samson as India and Sri Lanka Lock Horns in Lucknow! 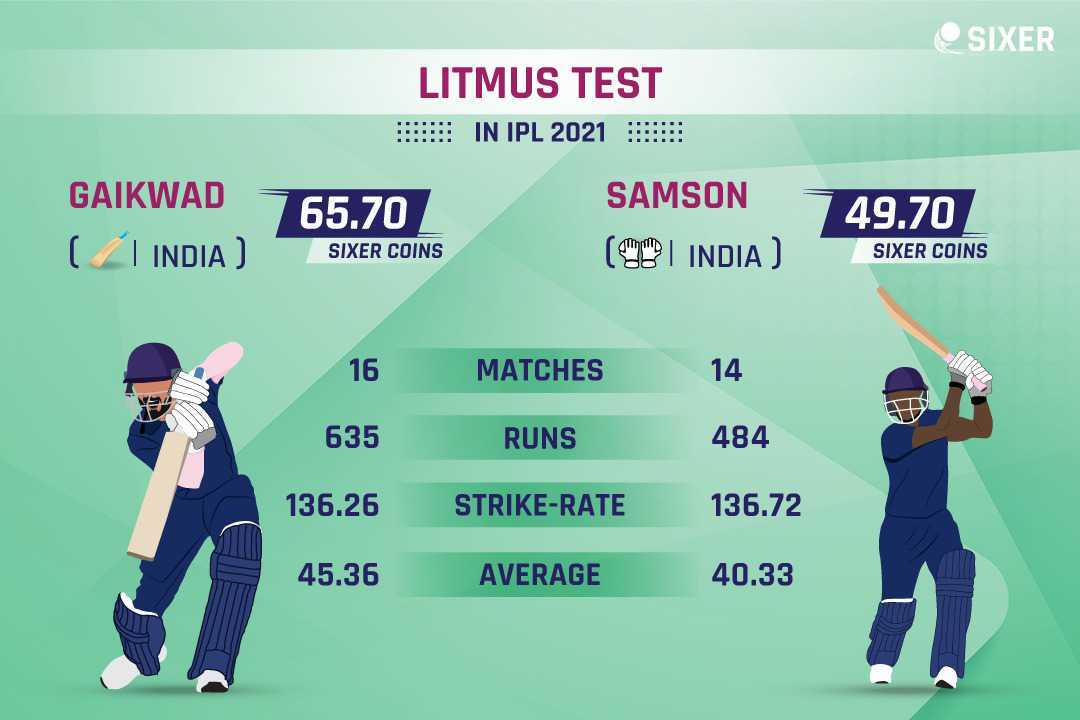 After a dominant series win against West Indies, India locks horns with Sri Lanka in yet another three-match T20I series. However, India have rested a few players like Virat Kohli and Rishabh Pant while the duo of Deepak Chahar and Suryakumar Yadav are out injured.

But such is the talent pool in India that you've got two IPL stars in Sanju Samson and Ruturaj Gaikwad coming in as replacements. But international cricket isn't like IPL cricket by any means. With tougher oppositions and greater expectations, the pressure is on Samson and Gaikwad to perform.

Although both of them haven't been able to translate their IPL form into the big stage just yet, the signs are ominous. To get a better idea of what these two are capable of, here is some much-needed insight to get yourself going in the Sixer Market!

High time for Gaikwad and Samson with T20 WC Looming!

Sanju Samson has been on the fringes of the Indian National Team for quite some time now. The Keralite is one of the best players of pace in Indian cricket although he hasn't been able to get going in the international Circuit. However, over the last few IPL seasons, Samson has been able to mix caution and aggression in equal measure.

In IPL 2021, Samson was able to score over 400 runs at a strike-rate of 136.72. Although his strike-rate dipped from the 2020 season, Samson's mature style of play stole the eye in his first season as RR captain. He still relies on his explosiveness in the middle overs but with a greater sense of responsibility, Samson has matured into a bankable option for India.

As for Gaikwad, his rise to prominence has come as a pleasant surprise. Gaikwad topped the runscoring charts in IPL 2021 with 635 runs at a strike-rate of 135. While he isn't a fast starter in the powerplay phase, Gaikwad makes up with his exceptional range against spin in the middle overs.

Both Samson and Gaikwad are expected to feature in this series with Rishabh Pant, Sanju Samson and Virat Kohli missing for the hosts. While Gaikwad is likely to open the batting, Samson will audition for a middle-order spot with an eye on the ICC T20 World Cup 2022.

Gaikwad's ability to play spin and hold one end up early on complements Ishan Kishan's skill-set perfectly. Adding in the left-right combo, it is a match made in heaven. As for Samson, it is now or never. The right-hander did struggle against Hasaranga last year in Sri Lanka but with the star leggie ruled out of the series, Samson can play freely without a doubt lingering on his mind.

Samson, like Gaikwad, has the range to go along with his eye for a big score. Not to mention, there aren't many players who can take on pace bowling in the backend of an innings like Samson or a Suryakumar Yadav can do.

While the competition for places is at an all-time high, Gaikwad and Samson walk into this series with everything on their side. A stable management plan, a fixed role in the side and an opportunity to nail down a place in the T20 set-up. Adding in a depleted Sri Lanka side to the mix, it truly is now or never for Gaikwad and Samson!