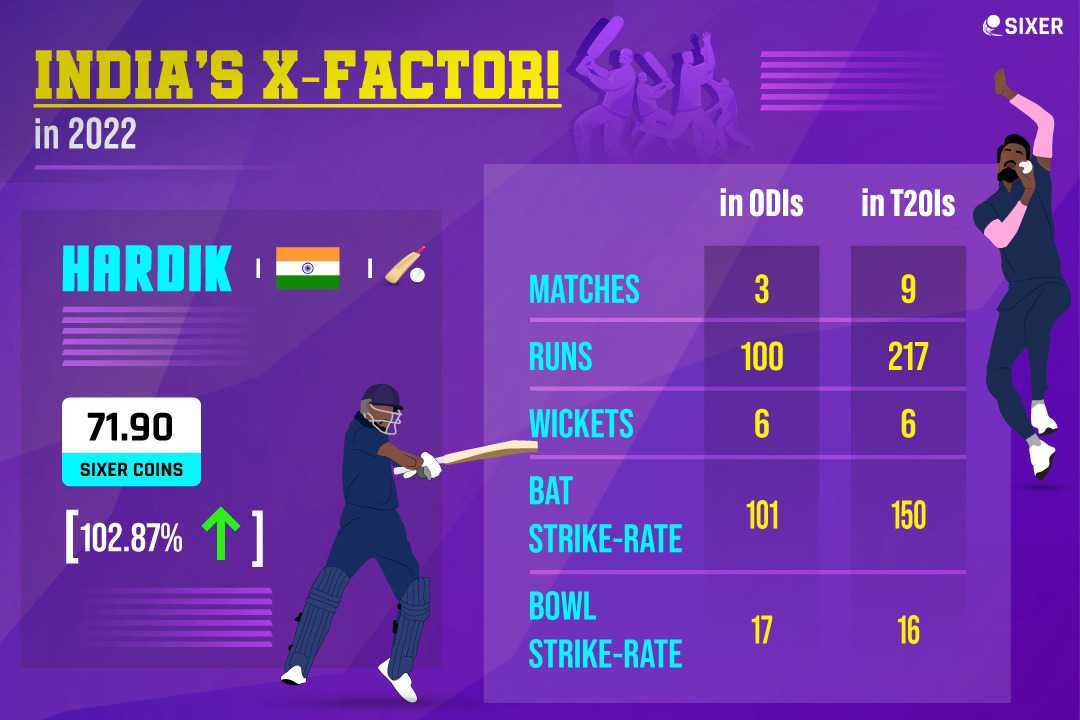 Fast-bowling all-rounders are a rare yet fascinating breed. While Ben Stokes, one of the finest in the business, steps down from ODI cricket, another such specimen is in the midst of a breakout season for his nation.

Hardik Pandya is an enigma! Initially touted as a T20 specialist, the Baroda all-rounder has moulded himself into perhaps the best fast-bowling all-rounder in the world in white-ball cricket. As India transitions into a new era under the tutelage of Rahul Dravid, the focus has shifted from a top-heavy batting unit into a more balanced one, to which Hardik Pandya is key.

The Indians recently ended their white-ball tour of England, having won four out of the six matches. But more importantly, it was Hardik Pandya who was at the forefront of both ODI and T20 series wins. But it is not just about these two series. Hardik has been in the form of his life ever since his IPL captaincy stint with the reigning champions Gujarat Titans. But there’s more to that as well. Without further ado, here’s some much-needed insight to get yourself going!

Many doubted Hardik’s ability as a cricketer after a couple of sub-par seasons in the IPL. In fact, the Mumbai Indians had overlooked Hardik as part of the retention despite knowing there was virtually no way they could get him back in the side. Fast forward to the backend of May, Hardik finishes the IPL with the trophy aloft, not to mention a man-of-the-match performance in the final to his credit.

He has transitioned the same form into the international scene as well, impressing against the South Africans and Irish. In fact, Hardik is striking at 150 with the bat and has also chipped in with key wickets as the designated fifth/sixth bowler depending on the conditions.

Hardik’s rather unique skill-set allows him to influence the game with both bat and ball. But it is his eagerness to stay involved that truly sets him apart. He picks up a wicket every 16 balls, which is more than decent for a support bowler. He is not the quickest, nor the most clever bowler but it is his tenacity that serves any team he plays for.

Even in the ODIs, Hardik, who is now India’s designated finisher, scored 100 runs in 2 innings at a strike-rate of 101. Even with the ball, Hardik has not been shy of dishing short stuff or even using his variations, yielding in six wickets across three matches. It is these sort of performances that have propelled Hardik Pandya to a near-undroppable status at the time of writing.

The modern day game warranties players to provide the X-factor, be it with the bat, ball or even on the field. Rishabh Pant is one name that stands out as an enigma in the middle-order. But Pandya, with bat and ball, does an irreplaceable job for any team he plays for.

Pandya has his issues with the short ball at times but remains a lethal player of spin and pace. He can change the course of a game in a matter of deliveries and loves counter-attacking in the face of a loss. With the ball, Pandya has a big heart and sticks to his guns. His performance in the third ODI against England was indicative of the same. He provides a balance to team India that no one else does, which makes him perhaps the best match-winner that the team has at the moment.

With two crucial tournaments fast-approaching, a lot will depend on Hardik Pandya, his form and health status as Team India eye glory!