Is McDermott Hurricanes' X-Factor in the BBL? 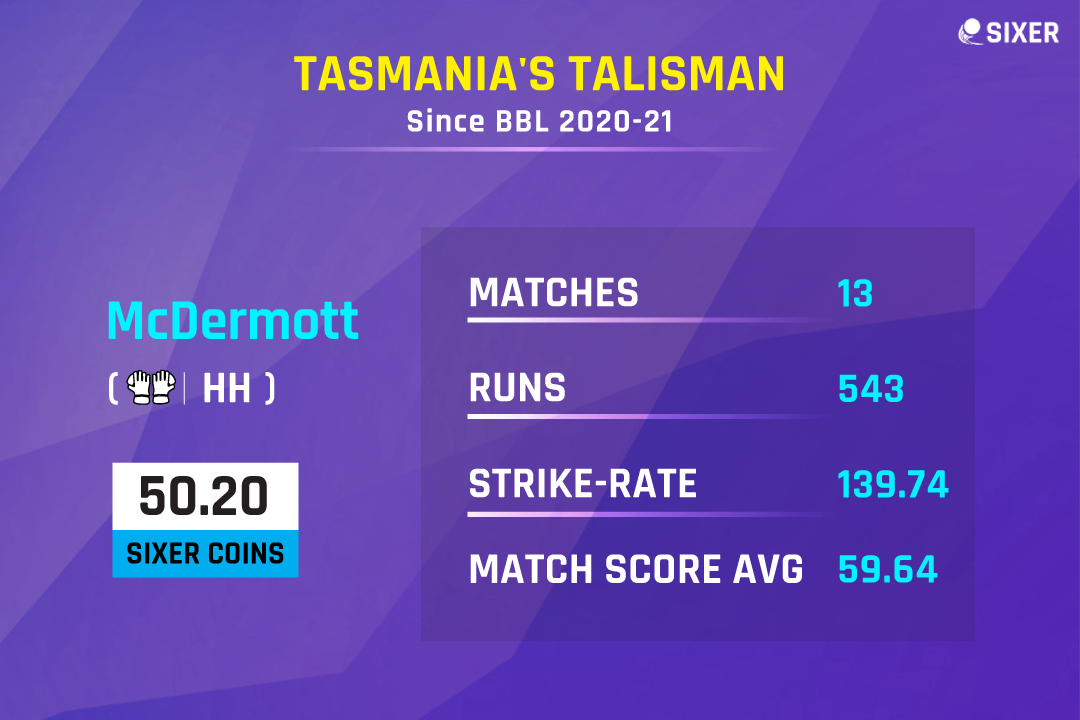 The BBL is back after a brief hiatus with the Sydney Thunder setting the ball in motion on Sunday against the Brisbane Heat. The action continues in Hobart as the Hobart Hurricanes face the Perth Scorchers in what promises to be a cracking game today.

The reverse fixture saw Mitchell Marsh score a sensational hundred with Hobart Hurricanes not being able to muster a challenge. The Hurricanes briefly did show signs of chasing it down when D'Arcy Short and Ben McDermott were scoring at a rapid pace in the middle overs. However, it was more of McDermott taking the attack to the Perth Scorchers bowling attack than Short, showing no signs of rust in his comeback.

But there's more to McDermott's performance than just one game. He has been in fine form in this competition in the last few seasons, scoring runs for fun. As we await the start of today's BBL match, here's some much-needed insight to get yourself going in the Sixer Market!

Ben McDermott burst onto the scene with a scintillating hundred against the Melbourne Renegades a couple of seasons back. However, he hasn't been able to live up to his reputation, that is until last season. The Hobart Hurricanes, who had initially wanted McDermott to take up the finisher's role, moved him back into the top-order last season.

As a result of a stable role in the top-order, McDermott had a monster season with over 400 runs to his name in just 12 games. He struck at over 130 runs per 100 balls to keep the momentum going in the middle-overs for the Hurricanes. It was McDermott who often provided the impetus in the backend as well, finishing off chases without any fuss.

His match score average of 59.64 is noteworthy, especially for a player who has a history with injuries. But again, there's more to come from McDermott's bat. He is quite good against pace and spin, can clear the boundary with ease and has a good head on his shoulders - all characteristics of a world class player, let alone an international.

McDermott started off with a fine knock of 43 runs against the Scorchers in this BBL season. Given that Hobart will be relying a lot on his explosiveness, McDermott could be in for a career-defining season! Can he come up with the goods today and going forward? That's a question whose answer should earn you a fair few bucks!