Is Rizwan Among the Best Wicketkeeper-Batsman In the World? 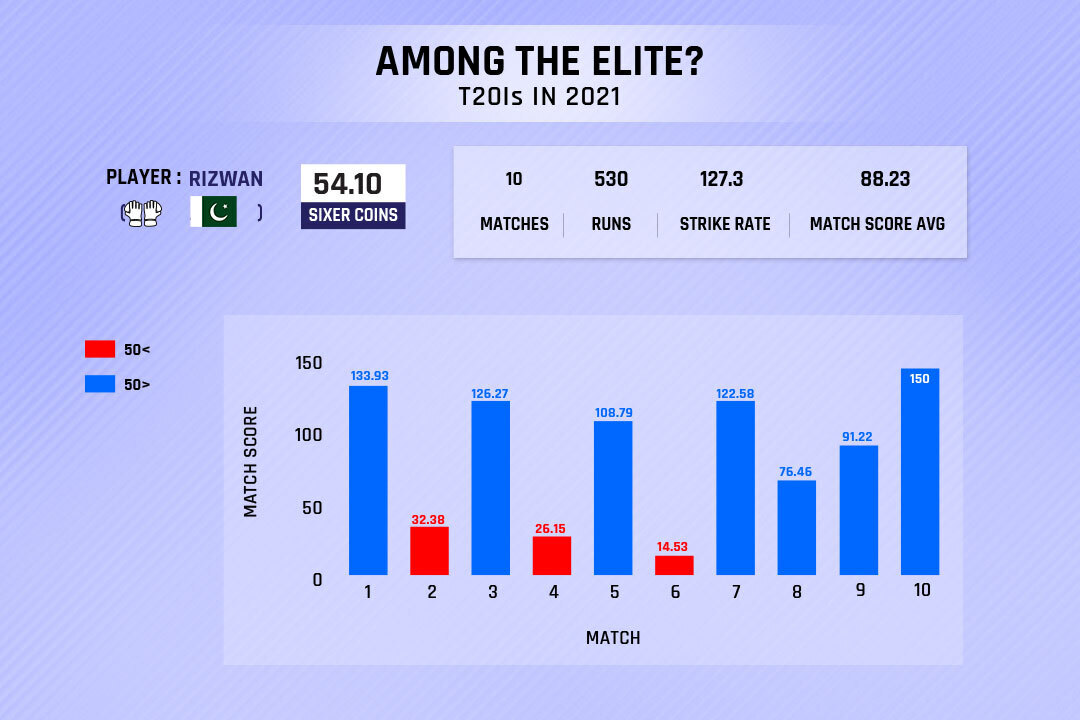 Pakistan has seen a lot of quality wicket-keepers in the last few years. Their former captain Sarfaraz Ahmed was the pick of the lot, which also includes the likes of Kamran Akmal and Zulqarnain Haider. However, none of them has come close to achieving what Mohammad Rizwan has done in the last few months.

Initially looked upon as a red-ball specialist, Mohammad Rizwan has risen to the occasion for Pakistan in all three formats. Rizwan is now regarded as perhaps Pakistan's second-best batsman after star attraction Babar Azam.

His rise to prominence has been utterly sensational, especially in the T20 format, which wasn't considered his stronger suit. But Rizwan has silenced his critics with memorable knocks in the top-order. Yet, the question still remains. Can he be considered alongside the likes of Quinton de Kock and Jos Buttler as the best wicket-keeper batsmen in the world? Here's an insight into his T20I form this year to get yourself going in the Sixer Market!

Mohammad Rizwan was never viewed as a white-ball specialist. He didn't play a single PSL game in the 2020 edition under captain Babar Azam in the Karachi Kings set-up. However, Rizwan's fate took a turn for the better on Pakistan's tour of New Zealand.

Amid a heap of injuries, Rizwan was promoted to the top of the order, an opportunity he didn't miss out on. Since then, Rizwan has become a mainstay in the top-order. In 2021, Rizwan has played ten games in which he has scored 530 runs at an average of over 60.

His stellar knocks against South Africa, against whom he even scored a T20I hundred, have undoubtedly propelled him to the top of the pecking order in Pakistan cricket. His impressive showing for Multan Sultans in the PSL also did his chances no harm.

Although Rizwan has the best numbers among wicket-keeper batters this year, there's still a gulf between him and the likes of Quinton de Kock and Jos Buttler. Unlike the aforementioned duo, Rizwan is somewhat restricted by natural ability, which he makes up for with his determination and ability to keep the scoreboard moving.

Another aspect that Rizwan trails is his strike rate. His strikes at 127.3 this year while the likes of de Kock and Buttler go about their work at over 140. Rizwan isn't similar to a de Kock or a Buttler in terms of style of play. The Pakistani relies on picking gaps like his captain Azam but lacks the same level of talent.

Nevertheless, Rizwan has succeeded like his captain Azam with his consistency shining through his art. Adding more value to his case, Rizwan rarely makes a mistake with the gloves on behind the stumps. Although he isn't really there in terms of being the best in the business, Rizwan's career trajectory makes for a compelling case.

However, there's still a lot to prove for Rizwan, and the road to the ICC T20 World Cup 2021 starts with the first T20I against England at Trent Bridge. Can he make an impact against the reigning world champions? Given the form that he is in, 54.10 Sixer Coins might seem a bargain at the end of this series!