Is Varun India's Lead Spinner-Elect for the T20 World Cup? 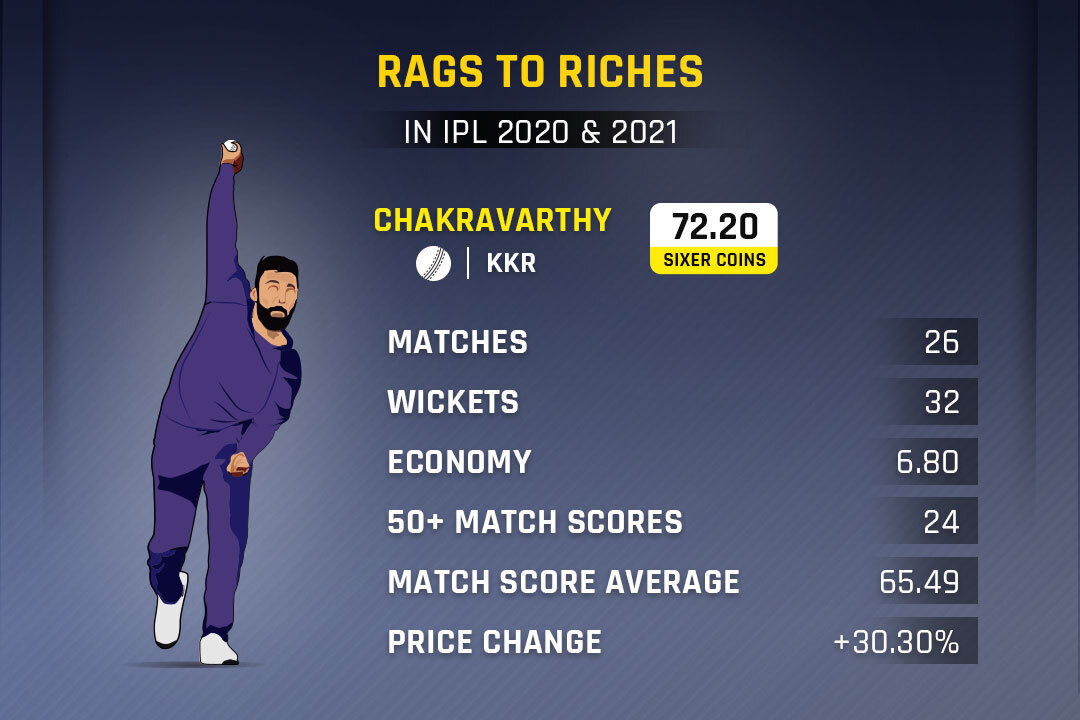 While the IPL slowly draws to a close, the focus is gradually shifting to team India and their ICC T20 World Cup squad, to which changes can be made until 10th October 2021!

With IPL action coming through thick and fast, some inclusions such as Ishan Kishan and Rahul Chahar, who didn't play many games in the international arena, have face some flak due to poor form. In fact, they have been dropped by the Mumbai Indians due to the same reason at some point in the tournament.

However, someone who falls into the inexperienced category and has lived up to the hype is Varun Chakravarthy, who is seemingly India's lead spinner despite playing only a handful of games for India. But Chakravarthy's talent is there for everyone to see.

Despite all the talent he possesses, is Varun the right man to herald the spin attack on pitches that is conducive to spin? Here is an in-depth analysis of why Varun fits the bill as India's go-to spinner ahead of the T20 WC!

Before IPL 2020, Varun Chakravarthy had experienced the ups and downs of the glamorous IPL! He was bought for a hefty price by Punjab before being ridiculed and released owing to injury concerns.

However, Varun has repaid KKR's faith in him with stellar performances for them in the last two IPL seasons. Preferred over Kuldeep Yadav, who was India's lead leggie at that point in time, Varun started IPL 2020 in steady fashion, bowling stump-to-stump and varying his pace and deliveries accordingly. But this was just the beginning for Varun!

Since IPL 2020, Varun has featured in 26 matches for KKR, in which he has registered a match score of fifty or more in 24 occasions! Baffling numbers for a bowler who didn't play much in the IPL. While he picked 32 wickets, which isn't among the highest by any means, his economy read just 6.80 despite bowling a few overs in the first six and final five for KKR!

A major reason for his success is his variety and deception. In the mould of Sunil Narine, Varun is a clever off-break bowler who can turn the ball both ways without giving much away. He can vary his pace without any fuss and has the much-needed aura of mystery around him. Like his idol Ravi Ashwin, Varun is also a good thinker of the game, which has served him well on several occasions.

In addition, Varun's height allows him to extract more bounce, making it a tricky proposition to deal with him in the middle overs. All in all, Varun Chakravarthy is what India needs in the T20I format, and given India's spin woes in recent years, the need for Varun in the kind of form he is in is essential!

Will Varun's inexperience come back to haunt India?

Inexperience has always been India's problem in such marquee tournaments. The fact that Vijay Shankar wasn't readied properly before the previous 50-Over World Cup hurts India to this day. Similarly, Varun has played just the three games in Indian colours against a lowly Sri Lankan side on spin-friendly surfaces, which isn't much to judge from.

But his IPL numbers are truly staggering. No other spinner can boast of such numbers, which include a price increase of 30.30% since IPL 2020! Although his inexperience is evident, his mystery could well play into India's hands, who will be eyeing a big win come late November!