Jack of All Trades - Is Shadab Finally Realizing His Potential? 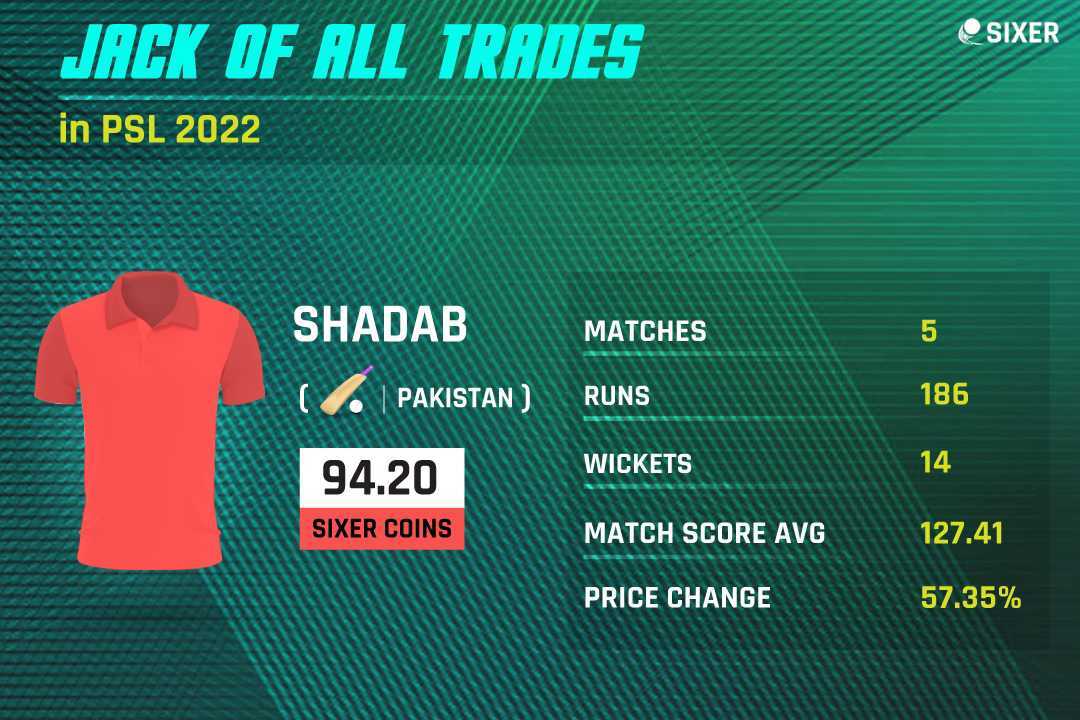 The Karachi leg of the PSL is done and dusted with the Multan Sultans flying high with five wins in five games. However, it was not just about the Sultans. Apart from the usual suspects Babar Azam and Shaheen Afridi, there was one individual who absolutely stole the show in the Sixer Market and on the field - Shadab Khan!

Islamabad United came into this tournament as the team to beat with a plethora of stars to fall back on. But it was their captain Shadab Khan whose star shone the brightest with his brilliance with both bat and ball.

Shadab Khan is currently the highest valued player in the Sixer Market with his fantasy stocks trading at 94.40 Sixer Coins per Share. If that wasn't enough to turn heads, his fantasy shares are up by 57% in the PSL already.

Whopping numbers for an allrounder! But how good has Shadab Khan really been for Islamabad United? Is he the player-of-the-tournament elect already? Here's some much-needed insight to get yourself going in the Sixer Market!

Yup, you read that correctly! Shadab Khan averaged a match score of 127.41 in the Karachi leg with his price moving up by 57%. Shadab was at it with both bat and ball as Islamabad won three matches out of five in the process.

Shadab's explosiveness in the middle-overs and ability to take down the spinners took the pressure of Colin Munro and Alex Hales, often propelling Islamabad United's total over the 170-180 mark. He accumulated 186 runs in five matches at a strike rate over 150. And the best part is still to come.

14 wickets in 5 matches are what Shadab managed with the ball. A fifer and a couple of four-fers to go hand-in-hand for Shadab as he single-handedly won them two games. The Islamabad United captain was able to provide breakthroughs consistently in the middle-overs and never made Islamabad feel the absence of a second spinner.

With such numbers under his belt, Shadab Khan might have just sealed the player-of-the-tournament debate already, even before it started to gather some momentum. But the scariest part is that Shadab is just 23 years old! Mind-boggling. How good can one be with bat and ball and not mention, he is perhaps Pakistan's best fielder too.

At 94.90 Sixer Coins per Share, Shadab has seemingly reached his peak but given the form that has been in, the best of the allrounder is still to come. If so, Sixer fantasy shareholders, you better watch out!