Rashid vs Super Kings! How Has Rashid Fared Against Dhoni and Co in the IPL? 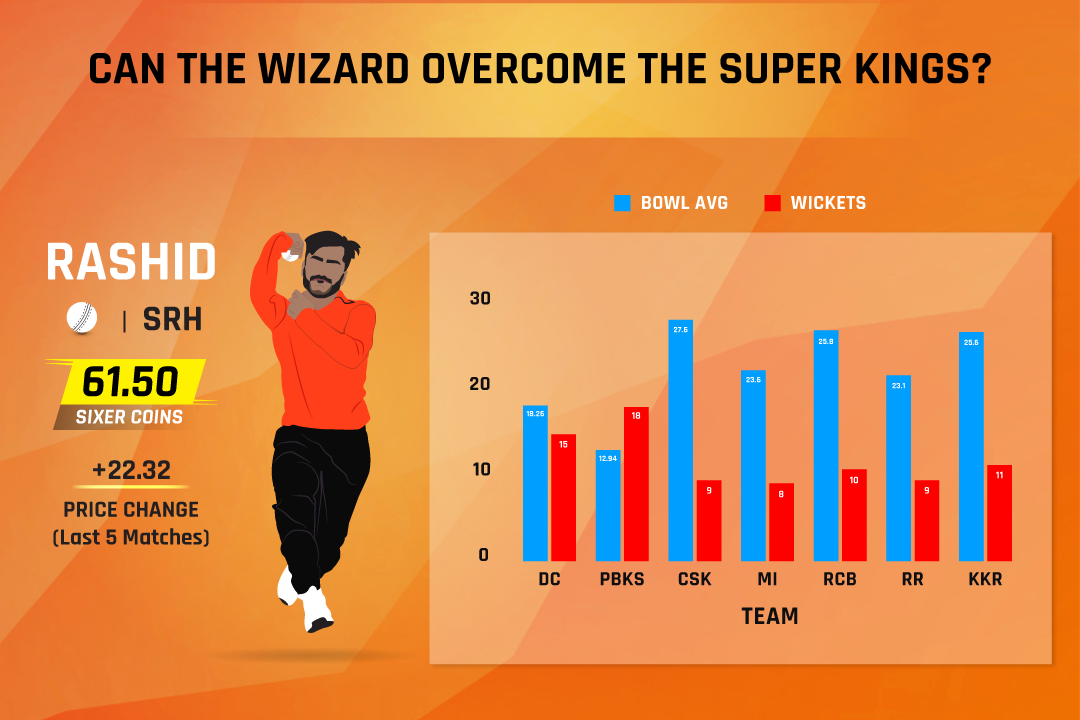 It's the Endgame for the Sunrisers, with the 2016 IPL Champions on the brink of exiting the competition this time around. They have lacked conviction with bat and ball with the likes of Manish Pandey and David Warner feeling the brunt of their failure at the expense of their places in the starting XI!

However, the Sunrisers have been able to bank on the expertise of Rashid Khan, who hasn't failed to deliver with his effective leg-spin. In fact, he is Sunrisers Hyderabad's leading wicket-taker and has even come up with handy knocks with the bat in the lower middle order.

Going into SRH's next clash against CSK, Rashid Khan will want to prove a point against a team that has done well historically against him. MS Dhoni and co are at the top of the table at the time of writing and are a win away from sealing a top-two finish. However, they face a stern test in the form of Rashid, who is known for his ability to get back at those who have dominated him in the past.

To get a better idea of how the battle between Rashid Khan and three-time champs Chennai Super Kings has panned out in recent years, here's some much-needed insight to get you going for the day!

The short answer to this would be - it's complicated! It isn't that Chennai Super Kings are the kryptonite to Rashid Khan's leg-spin. But they have generally had a better grasp of how Rashid operates and come up with a good strategy to get the better of him, more often than not.

Rashid Khan has also found some trouble in dealing with the Super Kings. In fact, he averages the highest with the ball against CSK with only nine wickets to his name in nine matches. A major reason is the CSK batsmen's competence against spin. With the Chepauk being a spin-friendly surface, Chennai bank on their batsmen to deliver in such conditions.

Suresh Raina and Moeen Ali are two of the best players of spin and back themselves to take the spinners on. Apart from them, Rayudu and Watson, who is now retired, have also had some success in picking the googly.

However, this doesn't mean Rashid hasn't had success against CSK. He has often gotten the better of MS Dhoni and is always a pest while defending a score. Rashid does have an inferior average against CSK, when compared to other IPL teams, but it still reads 29.8, which isn't too bad.

Considering the nature of the pitches in the UAE, Rashid Khan is due for a big performance with the ball. He has ample experience playing in these conditions and with CSK's openers Ruturaj Gaikwad and Faf du Plessis in fine form, Rashid could well be brought into the thick of things in the powerplay itself.

Who will come out on top in this fixture is going to be a question that may earn you a few bucks in the Real Market. Rashid, whose price is up by 22% in his last five games, might start as the favourite but you never know in this funny game we call cricket!