Sixer Scout: Is Livingstone The MVP Of the Hundred? 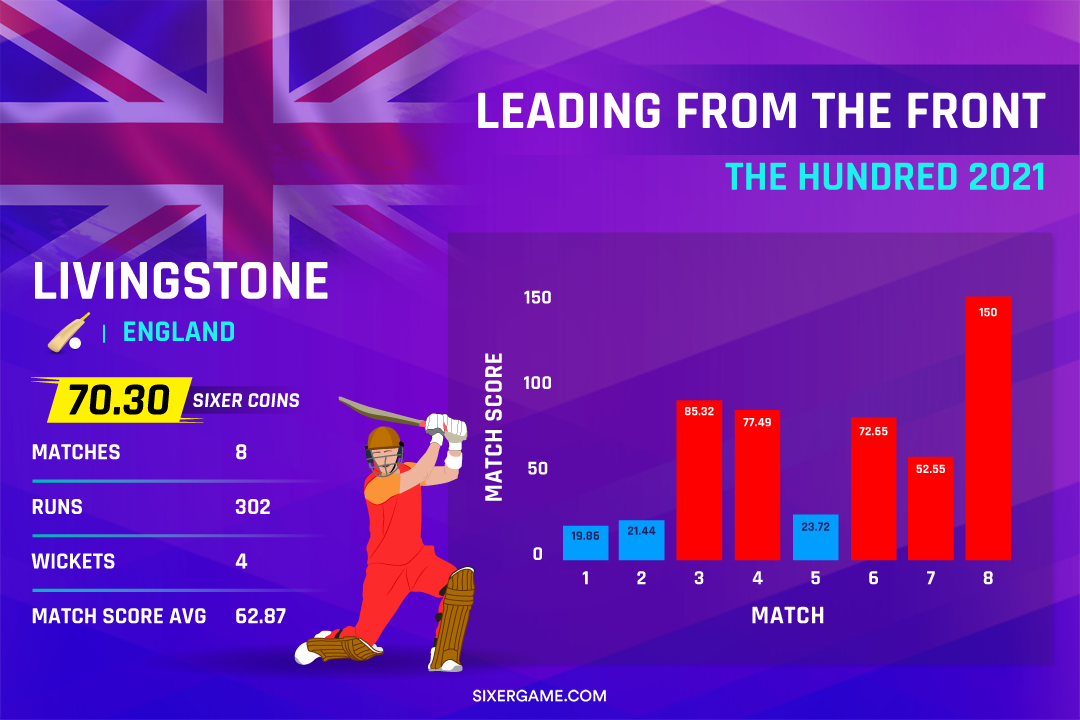 The Birmingham Phoenix stormed to the final of the Hundred with a stunning eight-wicket win against the Northern Superchargers on Tuesday. They chased down a decent total of 143 in just 74 balls to seal their place in the all-important final.

Their strong campaign, which includes five consecutive wins, has come on the back of some scintillating performances from their batters. The stand out, however, has been Liam Livingstone, who has been on fire in recent weeks.

He notched up a 150-rated match score performance on Tuesday with a stunning knock of 92 and three wickets to his name. This performance is already being rated as one of the best, alongside the likes of David Willey's perfect performance against the London Spirit and Rashid Khan's virtuoso spell against the Nothern Superchargers early in the tournament.

However, there's more to the eye than just that one big performance for Livingstone. The interim Birmingham Phoenix captain has led from the front in all three departments and is possibly the frontrunner to win player of the tournament. While there are others in the running as well, Livingstone might just have the best case of them all. Without further ado, here's further insight on Liam Livingstone and his fortunes in the inaugural Hundred 2021 season!

Explosive With Bat, Handy With the Ball; Livingstone Averaging Match Score of 62.87!

Liam Livingstone had an indifferent start to his Hundred with match scores of 19.85 and 21.44. However, a player of Liam Livingstone's class and talent wasn't to be kept down for too long.

He came up with a brilliant match score of 85.32 against the Southern Brave although his team couldn't win the game. But since then, both the Birmingham Phoenix and Liam Livingstone have been unstoppable.

Livingstone notched up four 50+ match scores in five games as Birmingham Phoenix won them all to seal a place in the Final. Livingstone came up with the goods with the bat against the Trent Rockets and Northern Superchargers earlier in the week, taking him to the top of the runscorers charts.

Although Moeen Ali, who was the Phoenix's top run-scorer when he left them, wasn't available for the second half of the tournament, Liam Livingstone more than made up for his absence with both bat and ball. Livingstone now boasts of a match score average of 62.87, second to only Harry Brook who played three games less than what Livingstone managed.

Livingstone is a menace with the ball as well. His ability to bowl both leg-spin and off-spin is a tricky proposition. Although Livingstone's multi-faceted bowling is a result of a lack of a googly, he holds his own against the very best. If there were any questions about his bowling ability, Livingstone's three-fer against Northern Superchargers should have silenced the critics.

All in all, Livingstone has truly lit up the Hundred with his explosive batting and accurate bowling ability. All that remains for Livingstone is to lead his side to Hundred glory although he will have some help in the form of Moeen Ali. With Finn Allen departing early, we could see Livingstone being promoted to the top of the order. If that is the case, the best of the Lancs all-rounder is yet to come in the Sixer Market!