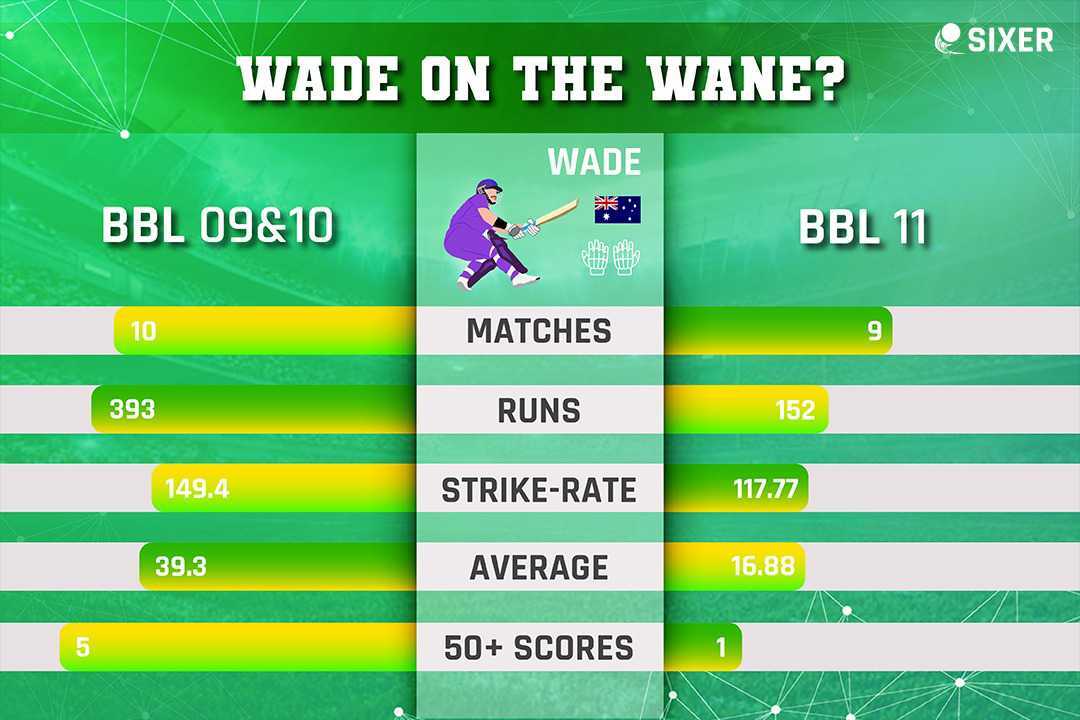 Double-Header BBL Thursdays are back as the Hurricanes take on the Thunder in the first game of the day. The Sydney Thunder have been flying high with six wins on the trot. The likes of Alex Hales and Daniel Sams have been brilliant and will bank on their expertise yet again to do the damage.

However, they come face a Hurricanes side that has shown glimpses of what they are capable of as a unit. While they would be missing the services of Harry Brook, they've got a top-five that any team would be envious of. Not to forget, they've got the leading runscorer Ben McDermott in their ranks.

But it isn't about McDermott. We shift our focus toward Matthew Wade, who returns to the set-up after the last two games. The southpaw hasn't been in the best of forms but that requires an in-depth insight. Without further ado, here is your Sixer Insight for the day!

Matthew Wade hasn't fired for the Hurricanes and it is indicative in his numbers too. The southpaw has just 152 runs in nine games this season with a strike-rate less than 120. This isn't like his usual self with Wade striking at neatly 150 over the last two seasons.

This time around, Wade has struggled to get outside the powerplay, often succumbing to new-ball spells. He has also had his fair share of bad luck with a few deliveries being chopped onto his stumps. He only has one fifty to his name so far although Wade's experience and batting ability cannot be taken for granted.

After a brief hiatus, Wade is back refreshed and looking to resume Hurricanes' charge for a top-five finish. While McDermott continues to impress at the top of the order, the Hurricanes will need Matt Wade to show up as well, which could ultimately spell trouble for the Thunder and the rest of the BBL. With demand for Wade's stocks being at an all-time high, the southpaw could be one to watch out for in the Sixer Market!