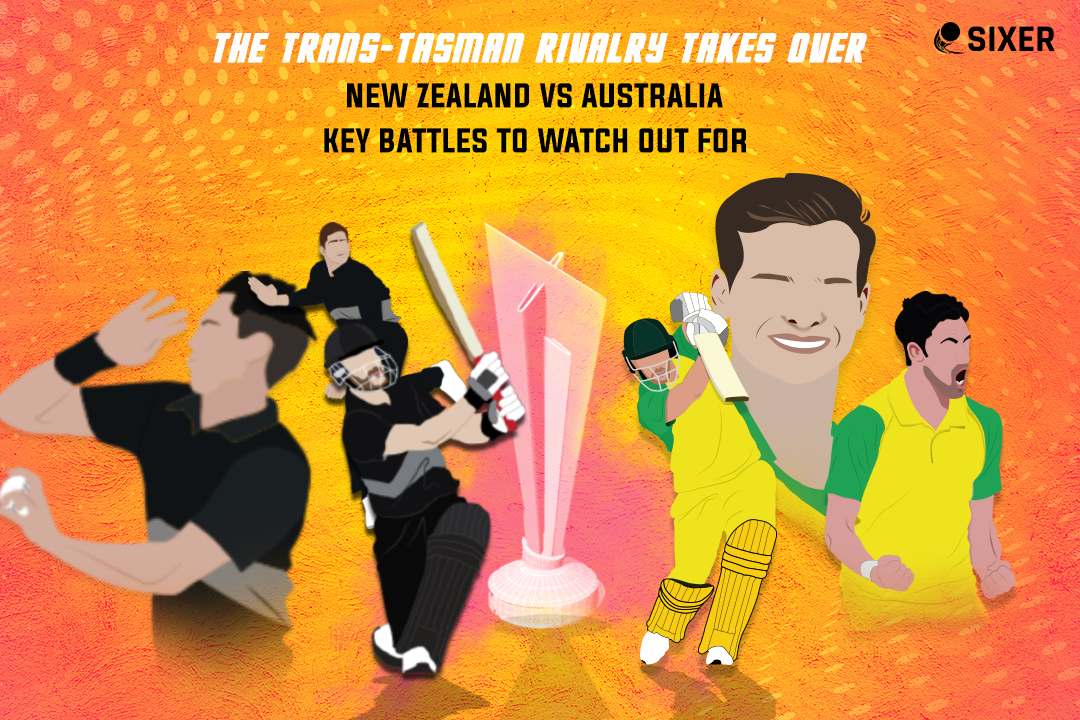 Finally, the much-awaited ICC T20 World Cup Final is nearly upon us, with Australia and New Zealand locking horns in Dubai. The icing on the cake for this game is the fact that we will have a country being crowned the T20 champions for the first time in history.

Both Australia and New Zealand have impressed with their tactical approach in this tournament. With tactics and match-ups becoming an integral part of this day and age, it becomes imperative that we also bring in some of this match-up madness into the game we so love, i.e. Sixer.

To help you capitalise on the key moments, we have pinpointed three key battles where this game could be won or lost. So without further ado, here are the key battles to watch out for in this epic clash between Australia and New Zealand!

Aaron Finch was dismissed by Shaheen Afridi in the previous game to an absolute jaffa. However, this was predicted by quite a few fantasy shareholders. Now, New Zealand themselves have a left-arm wrecker in Trent Boult, which may simplify this match-up for them. But this is far from what the numbers suggest.

Trent Boult has been aced by Aaron Finch in T20I cricket, with the Aussie captain scoring 42 runs off 28 Trent Boult deliveries without getting out. Despite Finch and Boult playing one another on pace-friendly tracks, it is the former who has come out trumps.

But when you bring in Trent Boult's form and experience, it adds another dimension to this battle. Who can forget Boult's virtuoso spell for the Mumbai Indians against Delhi Capitals in last year's IPL Final at this very venue? Taking everything into account, a pulsating battle beckons between two of the best in this format in the powerplay overs!

The summary of today's match could be New Zealand's bowling attack against Australia's batting unit, with battles across phases being an essential aspect. Although Ish Sodhi has been New Zealand's go-to bowler in the middle overs, Mitchell Santner has been their best bowler in that phase quite some time.

True that he isn't in the best of forms but as many say, class is permanent and form isn't. But he comes across Steve Smith, who is an accumulator of runs in the middle overs. Apart from his rash shot against Shadab in the previous game, Smith has looked assured in the middle order, shepherding them to successful chases on a couple of occasions as well.

While the sample size isn't too big in T20 cricket, it's been a fairly competitive battle between the two in ODI cricket. Smith has scored 41 runs in 59 balls whilst getting out once. But again T20 is a different ball game in which instinct does take over at the time of need. But which cricketer will finally come good in the Final is a question whose answer can earn you a few bucks!

Although the spotlight will be on the NZ bowling vs Australian batting, it isn't all about them in all fairness. New Zealand is also blessed with some brilliant talents with Kane Williamson being the cherry on the top. The Kiwi captain is one of the best batters in the world and despite for all his talent and greatness, he is due for a big one.

Williamson is likely to bat at three or four, which may take up a middle-over role. However, Australia will have Adam Zampa take up the challenge of getting the better of Williamson. Zampa has been in superb form, picking 12 wickets in this tournament, second to only Wanindu Hasaranga. His leg-breaks and skiddy googlies have been Australia's go-to asset in the middle overs and have been detrimental to their success so far.

Like the previous battle, Zampa and Williamson have also landed blows in the T20I format without a clear winner. Williamson has scored 26 runs off 20 balls whilst getting out once. However, Zampa might hold the edge with the leggie turning the ball away from Williamson, who will have added pressure on him given Devon Conway's injury. Adding in the fact that New Zealand has no right-handers in the top-six, provided Tim Seifert makes the cut ahead of Mark Chapman, Zampa is one to watch out for in this Final!