Tale of the Tape: All Eyes on Red-Hot McDermott and Harvey Ahead of BBL Double-Header 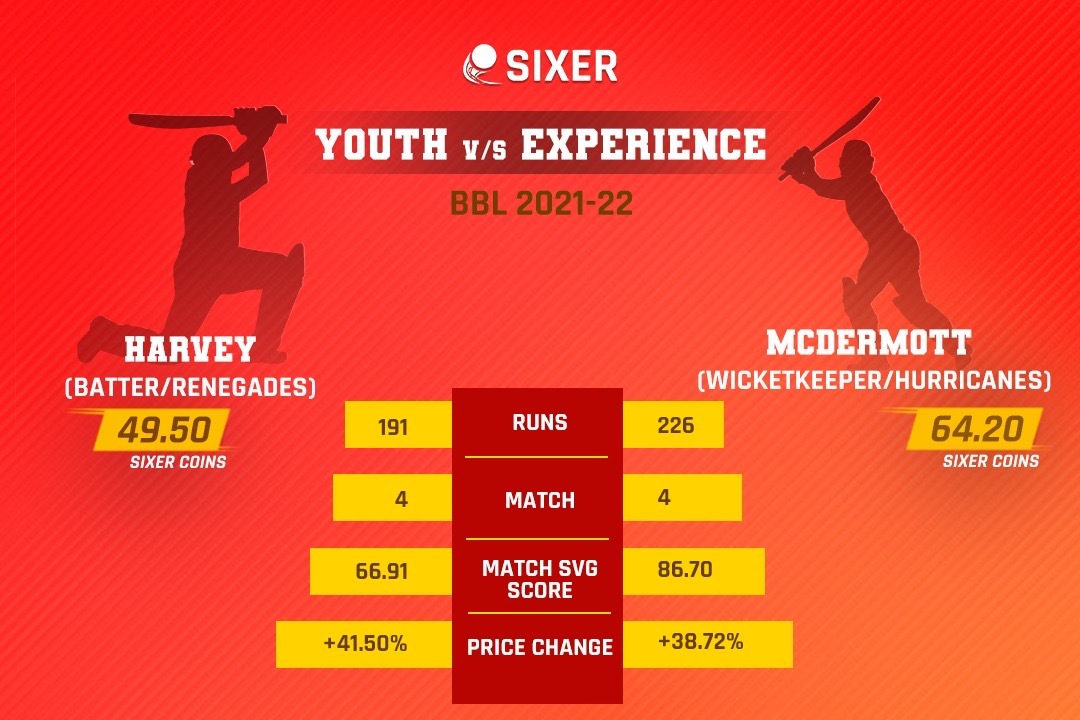 Ahead of an exciting clash between the Hurricanes and the Renegades at the Dockands Stadium, we turn our focus towards the in-form McDermott and Harvey.

The BBL points table is slowly taking shape with the halfway point of the tournament fast approaching. The Renegades, who won the competition a few seasons back, haven't hit their strides yet as they lie at the bottom of the table this time. However, they have a chance at getting back into winning ways against the Hurricanes in front of their home crowd at the Dockands Stadium.

But it isn't as easy for the Renegades. The Hurricanes come into this game on the back of two home wins courtesy of fine batting performances, particularly from Ben McDermott. The Hurricanes wicketkeeper has been in fine form over the last few games and will be keen to continue in the same way against the Renegades.

To counter the Hurricanes keeper, the Renegades will bank on the in-form Macca Harvey, who has exceeded expectations this season. The young prospect will relish a chance to go at a strong Hurricanes bowling attack with his numbers holding him in good stead. But how does he match-up with McDermott? Here's some much-needed insight to get you going in the Sixer Market!

Tale of the Tape: McDermott Acing the Match-Up Despite Harvey's Breakout Season!

Melbourne Renegades haven't had the services of Shaun Marsh for quite some time now. However, the emergence of Macca Harvey at the top of the order as a viable option bodes well for the Renegades in the long run. The former U-19 star has been consistent so far with the bat with 191 runs in five games. He boasts of a match score average of 66.91, resulting in a price change of +41.50%!

Although Harvey has always been a strong on-side player, his off-side game has also improved, holding him in good stead. In addition to his explosive batting ability, Harvey is one of the best fielders in the competition as well. With Harvey slowly finding his feet and striking a chord with consistency, he is certainly fulfilling his potential.

Someone who has been in Harvey's shoes before is Ben McDermott. Earmarked as an Aussie international for quite some time, consistency is something that has lacked in his game. However, McDermott has gone some way in proving his doubters wrong.

The Hurricanes star has 226 runs in four matches this season with a match score average of 86.70 to show for his efforts. He comes into this Renegades clash on the back of a hundred against the Strikers and a massive 38.82% increase in his last four matches. But against a decent Renegades bowling attack, McDermott's fortunes may go a long way in deciding the outcome of the contest!

Who will come out on top in this contest? Only time will tell!