The Next Gen is Here! Can Shaheen Outshine Rashid as Pakistan, Afghanistan Cross Paths? 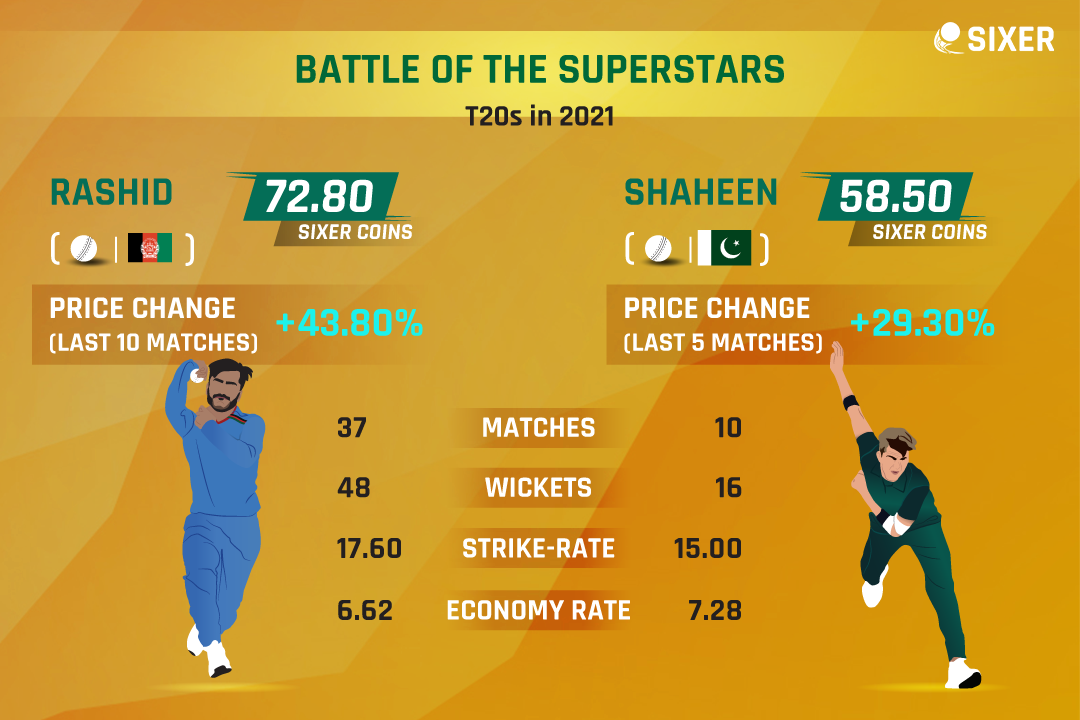 However, there is a chance of Pakistan slipping up as well. They are set to face a strong Afghanistan side today with the likes of Mujeeb ur Rehman and Rahmanullah Gurbaz in fine touch. But if one is going to talk about Afghanistan and cricket in the same sentence, surely Rashid Khan will need to come in at some point.

The star leg-spinner is one of the main reasons why Afghanistan is highly-rated in this format. Rashid is just one wicket away from the landmark of 100 wickets, a brilliant accomplishment for a bowler who is yet to turn 25!

But he isn't the only youngster to set the T20 stage on fire recently. Shaheen Shah Afridi, the Pakistan spearhead, has started this tournament in fine fashion, picking four wickets in two games. The twenty-one-year-old has been earmarked by Pakistan as a future great and is merely fulfilling his immense potential on the biggest stage. But how do these two superstars in Rashid Khan and Shaheen Afridi match up? Here's some much-needed insight into their performances in the T20 format this year!

Rashid the Better Performer, But Don't Sleep on Shaheen!

Not too long ago, Rashid Khan and Shaheen Afridi were teammates with the Lahore Qalandars. But today, they square off against one another, set to lead their respective bowling attacks on the biggest stage of them all!

Now, Rashid Khan is perhaps the best bowler in the T20 format, even ahead of Jasprit Bumrah and Mitchell Starc. Rashid, despite his young age, has a calm head on his shoulders, and it shows in his consistency across various conditions and countries.

In 2021 alone, Rashid has played in Australia, India, UAE, Pakistan and England - five countries with unique pitches. But the leggie has managed to pick 48 wickets in 37 games at an astounding strike rate of 17.60. Despite bowling in the backend of the innings at times, Rashid concedes just 6.62 runs per over at the time of writing.

His effectiveness can be attributed to his umpteen variations and an ability to outfox batters with his quick-arm action. He is at his best with his back against the wall and often comes up trumps while defending a total, which makes him one of the hottest prospects going forward.

Speaking of hottest prospects, surely Shaheen Afridi finds a spot in this elite list. The left-armer hasn't played many T20s this year but in the 10 PSL games that he featured in, he picked 16 wickets at a strike-rate of 15. His economy of 7.28 is quite respectable given that he usually bowls two upfront and two in the death overs.

He is a complete bowler in the mould of Mitchell Starc - capable of swinging the ball both ways at 140+ kmph! His ability to nail the yorkers in the death also hold him in good stead. If anyone is still unaware of what Shaheen is capable of, one may also look back to as far as the India game in which Afridi accounted for India's big three of KL Rahul, Rohit Sharma and Virat Kohli!

Both Rashid and Shaheen are in fine form going into this game. While Shaheen's price has increased by 29.30% in his last five games, Rashid has overseen a price increase of 43.80% over his last ten games. But in this epic battle between two of the very best, who do you think will come out on top? Only time will tell. But one thing is for sure. We will be hearing a lot about Shaheen Shah Afridi and Rashid Khan in the years to come!